Compact Disc player
This article is about the electronic device. For the Microsoft Windows Software, see CD Player (Windows). 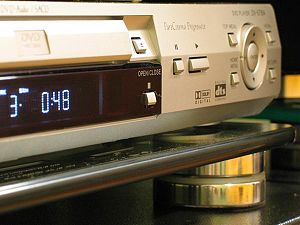 A Compact Disc player (often written as compact disc player), or CD player, is an electronic device that plays audio Compact Discs. CD players are often a part of home stereo systems, car audio systems, and personal computers. They are also manufactured as portable devices. Modern units can support other formats in addition to CDs, such as DVDs, CD-ROMs with audio files and video CDs. DJs often use players with an adjustable playback speed to alter the pitch of the music programme. CD playback functionality is also available on CD-ROM/DVD-ROM drive equipped computers as well as on DVD players and CD-ROM/DVD-ROM based game consoles. 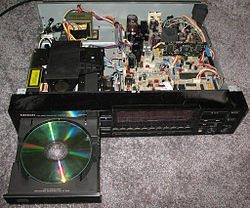 Sony released the world's first CD Player called the CDP-101[1] in 1982 utilising a slide-out tray design for the CD. As it was easy to use and manufacture, most CD player tray designs had followed this style of tray ever since. However there have been some notable exceptions.

During the launch of the first prototype CD player 'Goronta'[2] by Sony at the Japanese Audio Fair in 1982, Sony showcased the vertical loading design of the CD player. Although the prototype's design was never really put into actual production, it was for a time adopted for production by a number of early Japanese CD player manufacturers including Alpine/Luxman, Matsushita under the Technics brand, Kenwood and Toshiba/Aurex. For the early vertical loading players, Alpine sourced their AD-7100 player designs for Luxman,[3] Kenwood and Toshiba (using their Aurex brand). Kenwood added their 'Sigma Drive' outputs to this design as a modification. A picture of this early design can be seen on the Panasonic website.[4]

In 1983, at the US and European launch of the CD format, Philips with their CD100 CD player (sold as Magnavox in the US), showcased the first top loading CD tray designs.[5][6] The design had a clamp on the lid which meant the user had to close this over the CD when it was placed inside the machine. This was one of the primary reasons manufacturer Meridian created their MCD CD player,[7] whose chassis design was derived from the Philips CD100.

Apart from being adopted on various stereo equipment designs such as mini components, over the years only a handful of hi-fi quality top loading tray CD players had been made. The most notable were Luxman's D-500 and D-500X series[8] players, and Denon's DP-S1,[9] both launched in 1993.

The Philips CD303 of 1983-1984 was the first player to adopt tray loading with sliding play mechanism. Basically as the tray came out to collect the CD, the entire player's transport system also came out as one unit. The Meridians 200 and 203 players were of this type and also the first to use a design in which the audio electronics were in a separate enclosure from the CD drive and pickup mechanism.

Slot loading is the preferred loading mechanism for car audio head units, the Apple MacBook, PlayStation 3, amongst other audio players. There is no tray that pops out, and a motor is used to assist disc insertion and removal. Mini-CDs and non-circular CDs may have troubles with insertion and/or ejection. 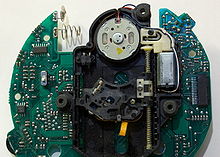 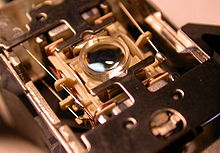 The optical lens of a CD drive 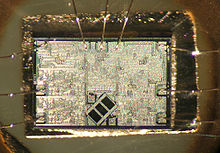 The optical chip extracted from a CD player. The three dark rectangles are photosensitive, and read the data from the disk. Electronic tracking keeps the laser beam centered on the middle area.

The swing-arm mechanism has a distinctive advantage over the other in that it doesn't "skip" when the rail becomes dirty. The swing arm mechanisms tend to have a much longer life than their radial counterparts. The radial mechanism works best for CD-ROMs, though, as the speed of the disc increases. 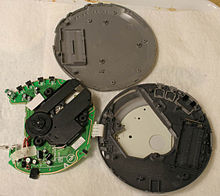 A CD player has three major mechanical components : a drive motor, a lens system, and a tracking mechanism. The drive motor (also called spindle) rotates the disc between 200 and 500 revolutions per minute. The tracking mechanism moves the lens system along the spiral tracks in which information is encoded, and the lens reads the information using a laser beam, typically produced by a laser diode. The laser reads information by focusing a beam on the CD, which is reflected back to a sensor. The sensor detects changes in the beam, and interprets these changes to read the data. This data is processed, and eventually converted to sound using a digital-to-analog converter (DAC).

CD players can employ a number of ways to improve performance, or reduce component count / price. Features such oversampling, one bit dacs, dual dacs , interpolation, anti skip memory, digital and optical outputs are, or were, likely to be found. Other features improve functionality, such as random play and repeat, or direct track access. Yet others are related to the CD player's intended target, such as anti-skip for car and portable CD players, pitch control and queing for a DJ's CD player, remote and system integration for household players. Description of some features follows:

A CD changer holds multiple Compact Discs, usually in a cartridge, and allows the user to access (or play) any of them, one at a time. CD changers were commonly found in home cinema systems, in cars and, less frequently, in computer equipment. 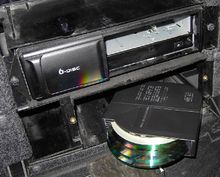 External cartridge CD changers have one or more cartridges that the user loads with up to twelve different CDs (depending on manufacturer) and then inserts into the CD changer. The CD changer can then remove one CD at a time for playing. This type of player is commonly found in vehicles because the user can switch easily between large amounts of media contained in different cartridges. 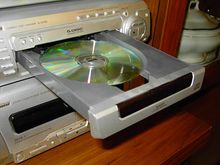 Internal cartridge CD changers work on the same basic principle as external cartridge players, except the cartridge never leaves the CD player. This type of CD player accepts multiple CDs through a single slot and stores them internally. 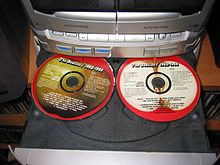 A carousel-type CD changer consists of a circular platter that holds three or more CDs. Traditional carousel CD players hold three, five, or seven discs on a flat carousel tray. The carousel ejects to allow access to the CDs. Once back inside, the CD changer can rotate the carousel to access all of the CDs. Such carousel CD changers often allow the user to rotate the carousel while open, and change all CDs if no CDs are currently playing, or to eject the carousel while one CD is playing to change any CDs accessible from that position. Another type of carousel CD player is the mega-disc or "jukebox" CD players as they are also known. They usually hold anywhere from 50 to 300 discs. The mega-disc CD player holds its discs in a vertical position in slots that are located 360 degrees around the carousel. When a disc is selected to be played, the carousel rotates so that the disc can be picked up by a pickup mechanism and placed in CD playback unit. Mega-disc CD players generally have a means of entering in titles of the CDs stored inside them, such as telephone style letter input system found on the remote control, a full letter keypad on the unit, or by use of an external keyboard attached to the unit. Many units can also automatically obtain the title of a CDs if it contains CD-Text info stored on it.

Changers were in a period when the mean hard drive capacity was measured in hundreds of megabytes. After exponential growth of hard drive storage density, a single inexpensive hard disk drive has many times the capacity of a CD, and changers have fallen out of use.