At the beginning of the temperance movement in the United States, many states controlled where and when alcohol could be sold. Before this time, most alcoholic beverages for off-premises consumption were often sold just like any other item of commerce in stores or in saloons/bars. Because of heavy lobbying by temperance groups in various states, most required off-premise beverages to be sold in dedicated stores (primarily called dispensaries). To further enhance oversight of beverage sales, some states such as South Carolina operated state-run dispensaries.

Following repeal of national prohibition in the U.S. in 1933, some states initially decided to continue their own prohibition against the production, distribution, and sale of alcoholic beverages within their borders. Other states decided to leave the issue to local jurisdictions, including counties and cities, a practice called local option.

States were also able to restrict the importation of "intoxicating liquors" into their territory under the provisions of the Twenty-first Amendment to the United States Constitution which, while ending the Federal role in alcohol control, exempted liquor from the Constitutional rule reserving the regulation of interstate commerce to the Federal government. Thus states which wished to continue Prohibition could do so.

Among those states that did not choose to maintain complete prohibition, some chose to establish government monopolies over the sale of alcoholic beverages within their borders. Most of these states have an Alcoholic Beverage Control (ABC) board and run package stores called ABC stores.

Reasons for doing this vary; for example, the Utah Department of Alcoholic Beverage Control states that:

The purpose of control is to make liquor available to those adults who choose to drink responsibly - but not to promote the sale of liquor. By keeping liquor out of the private marketplace, no economic incentives are created to maximize sales, open more liquor stores or sell to underage persons. Instead, all policy incentives to promote moderation and to enforce existing liquor laws is enhanced.[1]

Beginning in the 1960s onward, many control states loosened their monopoly of beverage sales. States like West Virginia sold all of their state liquor stores to private owners, while others like Vermont permit private store owners to sell alcohol on behalf of the state for a commission. 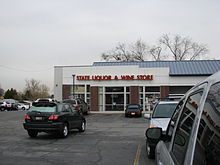 There are currently 21 monopoly states in the U.S.. The term "control state" is popular but ambiguous, since all states control and regulate the sale of alcohol to some degree. Only 21 states are monopoly states, and the term "control state" frequently refers to these 21 states in particular. The extent to which this monopoly extends differs from state to state. Out of the 21 states that regulate alcohol wholesaling, only nine (Alabama, Idaho, New Hampshire, Oregon, North Carolina, Pennsylvania, Virginia, Washington, and Utah) run liquor establishments. The others either permit ABC licensed private stores to sell liquor or contract the management and operations of the store to private firms, usually for a commission.

In all of these control states, some form of low-alcoholic beverages are available in private retail outlets for off-premise consumption. Most of these states require private retail outlets to have a license issued by the ABC board (usually called an ABC off License). Similar licensure procedures apply for acquiring an on-premise license.

Use of the term "alcoholic beverage control" by a state does not make it a "control" (or monopoly) state. For example, Arkansas uses "Alcoholic Beverage Control" or "ABC" to refer to its state agencies that regulate alcohol sales; yet all alcohol sales (wholesale and retail) in those communities that allow it are by private firms. Though Arkansas (like most states) generally limits the number of retail outlets in an area, outlets within those limits are free to compete. Therefore, Arkansas is a local option state, but it is not a "control" (or monopoly) state.

Many "control" (or monopoly) states are members of the National Alcohol Beverage Control Association.

About one-quarter of the United States population lives in control or monopoly states.