Infobox Film
name = Quigley Down Under 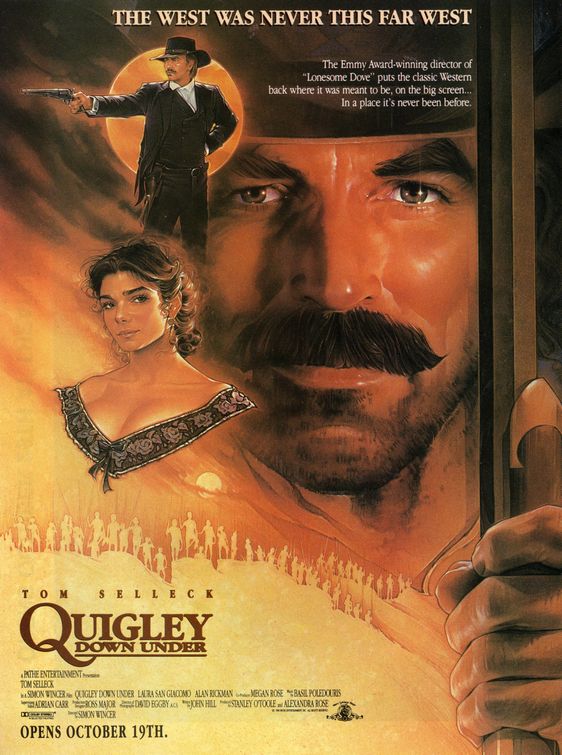 
"Quigley Down Under" is a 1990 western film. It was originally intended to star in 1980, but after an illness by the star the project was suspended and not filmed until a decade later. Directed by , the film runs 119 minutes, and is rated PG-13 in the .

plays the titular Matthew Quigley, a and gunman from America with a keen eye and a specially modified rifle with which he can shoot at extraordinary distances. Quigley's weapon of choice is an Sharps Buffalo Rifle which fires paper patch cartridges. Its barrel is 34 inches long, which makes it four inches longer than an unmodified rifle. He answers an advertisement that asks for men with a special talent in long distance shooting, the job being in . On arriving, he is met by employees of the man who hired him, Elliot Marston (), and taken to Marston's in the .

Marston is a gentleman infatuated with stories of quick-draw gunslingers from the , believing himself to have been born on the wrong , and amazed that Quigley has actually "been" to Dodge City. He hires Quigley to come to Australia in the hopes that Quigley will use his sharpshooting skills to help eradicate the native aborigines. Quigley finds the idea abhorrent and the two men are quickly headed for a showdown.

provides comic relief and a love interest as "Crazy Cora." Having suffered a terrifying personal tragedy some years before the film's story begins, Cora appears to think that Quigley is her estranged husband, Roy. By the film's end, the viewer is left with some doubt as to how crazy she really is.

After Quigley turns Marston down, Marston has his men dump Quigley and Cora in the Australian Outback with no water and little chance of survival. Thanks to the help of a group of aborigines, Quigley and Cora survive to rescue other aborigines from Marston's men, including an orphaned baby who helps Cora overcome her tragic past. As the story progresses, Marston loses more and more men to Quigley until the final showdown, which leaves Quigley standing to face a hostile British major. Again with the help of the aborigines, Quigley survives. The movie ends with Quigley and Cora purchasing passage on the next ship to America.

The famous firearm that is used by the main character Matthew Quigley is a custom 1874 . The gun used for filming was a replica manufactured for the film by the of . Tom Selleck later donated the rifle to the as a fund-raising item.

The film engendered a rapid rise in interest in the use of , cartridge firing rifles for shooting competitions.

Quigley, describing the rifle:: "It’s a , . Usual barrel length’s thirty inches. This one has an extra four. It’s converted to use a special forty-five caliber, hundred and ten grain metal cartridge, with a five-hundred forty grain paper patch bullet. It’s fitted with double set triggers, and a Vernier sight. It’s marked up to twelve-hundred yards. This one shoots a mite further."