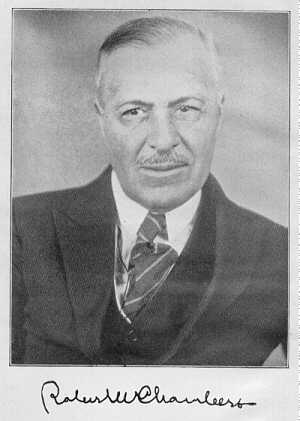 He was born in , , to (1827 - 1911), a famous lawyer, and Caroline Chambers ("née" Boughton), a direct descendant of Roger Williams, the founder of . Robert's brother was Walter Boughton Chambers, the world famous architect.

Robert was first educated at the Brooklyn Polytechnic Institute,and then entered the Art Students' League at around the age of twenty, where the artist was his fellow student. Chambers studied at the , and at , in from 1886 to 1893, and his work was displayed at the Salon as early as 1889. On his return to New York, he succeeded in selling his illustrations to "Life", "Truth", and "Vogue" magazines. Then, for reasons unclear, he devoted his time to writing, producing his first novel, "In the Quarter" (written in 1887 in ). His most famous, and perhaps most meritorious, effort is "", a collection of weird short stories, connected by the theme of the fictitious drama "The King in Yellow", which drives those who read it insane.

Chambers returned to the weird genre in his later short story collections "" and "", but neither earned him such success as "The King in Yellow".

Chambers later turned to writing to earn a living. According to some estimates, Chambers was one of the most successful literary careers of his period, his later novels selling well and a handful achieving best-seller status. Many of his works were also serialized in magazines.

After 1924 he devoted himself solely to writing .

Chambers for several years made Broadalbin his summer home. Some of his novels touch upon colonial life in Broadalbin and Johnstown.

Chambers died at his home in the village of Broadalbin, New York, on December 16th 1933.

said of Chambers in a letter to ,

:"Chambers is like and a few other fallen Titans - equipped with the right brains and education but wholly out of the habit of using them." [Lovecraft, "Selected Letters" vol. 2, ed. August Derleth and Donald Wandrei (Arkham House, 1968), p. 148.]

:"So much of Mr Chambers's work exasperates, because we feel that he might so easily have made it better." [Cooper, "Some American Story Tellers" (Henry Holt, 1911), p.81. Quoted in Joshi, "The Evolution of the Weird Tale", p.18.]

A critical essay on Chambers' horror and fantasy work appears in 's book "The Evolution of the Weird Tale" (2004).

The fictitious play "The King in Yellow", which features in several of Chambers' weird tales, also appears in 's story "The River of Night's Dreaming". 's story "More Light" purports to include much of the actual text of the play.