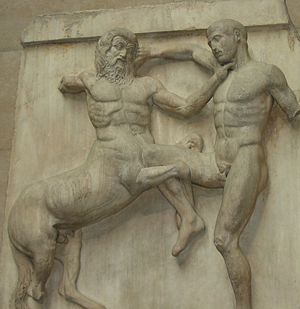 Metope from the Parthenon marbles depicting part of the battle between the Centaurs and the Lapiths.

In classical architecture, a metope (μετόπη) is a rectangular architectural element that fills the space between two triglyphs in a Doric frieze, which is a decorative band of alternating triglyphs and metopes above the architrave of a building of the Doric order. Metopes often had painted or sculptural decoration; the most famous example is the 92 metopes of the frieze of the Parthenon marbles depicting the battle between the Centaurs and the Lapiths. The painting on most metopes has been lost, but sufficient traces remain to allow a close idea of their original appearance.

In terms of structure, metopes may be carved from a single block with a triglyph (or triglyphs), or they may be cut separately and slide into slots in the triglyph blocks as at the Temple of Aphaea. Although they tend to be close to square in shape, some metopes are noticeably larger in height or in width. They may also vary in width within a single structure to allow for corner contraction, an adjustment of the column spacing and arrangement of the Doric frieze in a temple to make the design appear more harmonious.