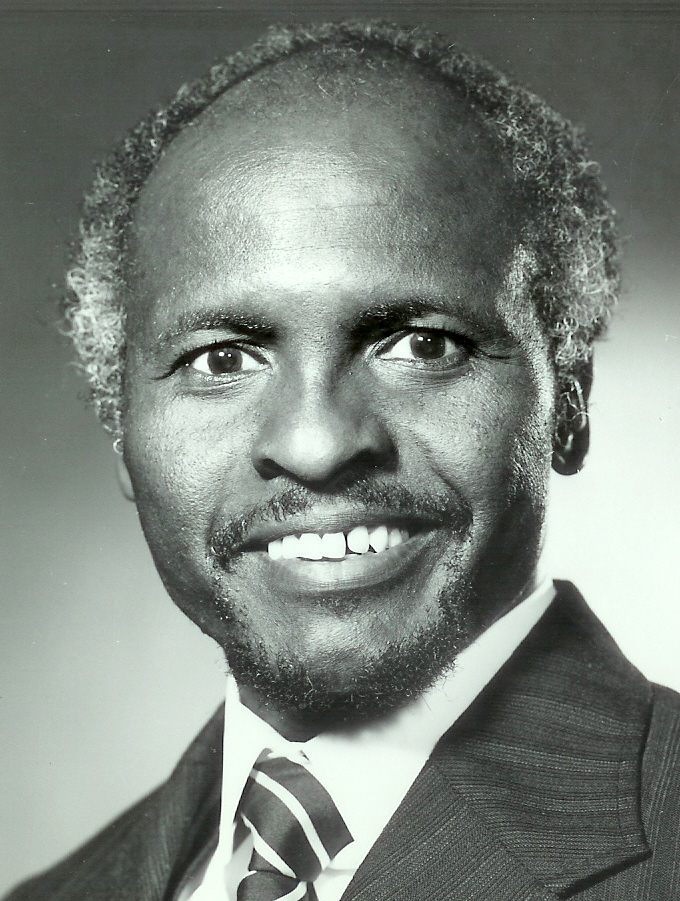 Canaan Sodindo Banana (5 March 1936ndash 10 November 2003) served as the first from 18 April 1980 until 31 December 1987. A minister, he held the largely ceremonial office of the presidency while his eventual successor, , served as .

During his lifetime, Banana brought together two of the country's political parties, the (ZANU) and the (ZAPU), became a diplomat for the , and headed the religious department of the . His later life was complicated by charges of - a crime in Zimbabwe - which he denied and for which he was later imprisoned.

Banana was born in 1936 in , near . His parents were a -cultured mother and a an father who had emigrated to Rhodesia. He was educated by missionaries in a local school and later studied at a teacher training institute.

He wrote a book entitled "The Gospel According To The Ghetto", and a personalised version of the .

When many Council members were arrested in the late 1960s, Banana and his family fled to the and did not return until 1975. Banana was arrested on his return but was released a year later, kept under house arrest, and then allowed to participate in 's plans for the country. However, he abandoned that effort and joined ZANU (led by ), which was dedicated to overthrowing the Smith administration. Returning to Rhodesia in December 1976, Banana was arrested once more for his support of ZANU; upon the appointment of Christopher Soames as British governor, he was released from prison.

Under the country's new constitution Banana became the first president in 1980 and first black leader of Zimbabwe. In 1982 a law was passed forbidding citizens from making jokes about his name. In 1987 his largely ceremonial

The former president's term in office was a subject of scandal in later years, marking his legacy to in and abroad. In 1997, Banana was arrested in Zimbabwe on charges of sodomy, following accusations made during the murder trial of his former bodyguard, Jefta Dube. The charges related to allegations from the state prosecutor that Banana had misused his power while he was president to coerce numerous men in positions of service (ranging from domestic staff to security guards, and even members of sports teams for whom he had acted as referee) into accepting sexual advances. Banana was found guilty of eleven charges of sodomy, and in 1998. He denied all charges, saying that is "defiant, abominable and wrong", and the allegations made against him were "a mortuary of pathological lies" intended to destroy his political career. Janet Banana later acknowledged her husband's indiscretions, even though she considered the charges against him to be politically motivated. [Taylor, Rebecca. [http://www.guardian.co.uk/zimbabwe/article/0,2763,637796,00.html 'They say that power corrupts - and it does'] . "The Guardian". .]

He fled to whilst released on bail before he could be imprisoned, apparently believing Mugabe was planning his death. He returned to Zimbabwe in December 1998, after a meeting with , who convinced him to face the ruling. Banana was sentenced on 18 January 1999 to ten years in jail, nine years suspended, and was also . He actually served six months in an open prison (being allowed to leave for shopping) before being released in January 2001.

On 10 November 2003, Banana died of cancer, [ [http://news.bbc.co.uk/2/hi/africa/3258969.stm Canaan Banana of Zimbabwe dead] . "BBC News". . Retrieved .] in , according to a report delivered by the Zimbabwean High Commissioner. The "Guardian Unlimited", a London-based newspaper, has claimed that Banana had traveled to South Africa, where he eventually died, in order to receive appropriate treatment for his cancer; however, this dispute relies upon uncorroborated testimonial evidence. He was buried in Zimbabwe in late November 2003. President Robert Mugabe called him "a rare gift to the nation" in a radio address. [ [http://www.theglobeandmail.com/servlet/ArticleNews/TPStory/LAC/20031112/OBBRF12-1 Zimbabwe's first black president, hit by scandal] . "The Globe and Mail". . Retrieved .] Banana was buried without the full honours that are traditionally accorded to former heads of state. The then politburo Secretary for Information and Publicity told state radio that "they (the politburo) could not accord Banana hero status as a matter of principle." [ [http://www.zic.com.au/updates/2003/25november2003.htm Zimbabwe Information Centre Archives of November 2003] . Retrieved .] His wife sought in Britain in October 2000 under a preexisting accord.