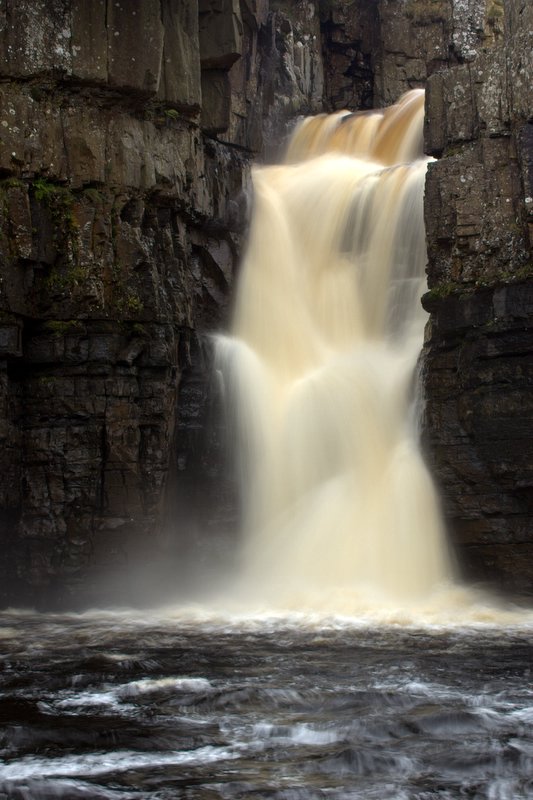 caption = High Force on the River Tees
origin =
mouth =
basin_country =
length = 132 km (85 mi)
elevation = 754 m (2510 ft)
discharge =sd
watershed = 1834 km² (708 sq mi)The Tees is a river in . It rises on the eastern slope of in the , and flows eastwards for about 85 miles (132 km) to the , between and . [ [http://www.bbc.co.uk/tees/features/tees_trail/index.shtml "BBC Where I Live"] - BBC. Retrieved .] It drains an area of 708 square miles (1834 square km), and subsumes no important tributaries. The river formed the boundaries between the historic counties of and . At its lower reaches it now forms the boundary between the ceremonial counties of County Durham and .

In the earliest part of its course it forms the boundary between the historic counties of and Durham. The head of the valley, of which the upper portion is known as , has a desolate grandeur; the hills, exceeding 2500 feet in height at some points, consist of bleak . This area is part of the North Pennine Area of Outstanding Natural Beauty, recently designated a geological Europark, the first in the UK.

A succession of falls or rapids, where the river traverses a hard series of black ic rocks, is called "". From a point immediately below this to its mouth, the Tees forms the boundary between the traditional counties of Durham and almost without a break, although since much of it lies wholly in Durham. The dale becomes bolder below Cauldron Snout, and trees appear, contrasting with the broken rocks where the water dashes over . High force is a big waterfall but its biggest problem is that it is extremely powerfall, with a huge current.

The scenery becomes gentler and more picturesque as it descends past (Durham). This locality has and stone resources. The ancient of , , and , well known through Sir 's poem, are passed; and then the valley begins to open out, and it traverses the rich plain east and south of in sweeping curves.

The course of the valley until here has been generally east-southeast, but it now turns northeast and, nearing the sea, becomes an important commercial waterway, having on its banks the ports of and . It passes through the between Stockton-on-Tees and Middlesbrough, turning tidal downstream from the barrage.

is built on on the south side of the Tees below Middlesbrough.

The River Tees was featured on both the television programmes "" as one of the wonders of the North and the post-apocalyptic drama "" having blown its banks.

Before the heavy industrialization and pollution of the Tees by industry, the flats at Seal Sands in the Tees estuary were home to s and s. For around 100 years these species were lost from the estuary due to the heavy pollution. In recent times however, water quality has improved drastically, and they can now be seen in the estuary and on the flats at once again. [ [http://www.naturesworld.org.uk/old/tees/map.htm#seal "Natures World"] Natures World Tees Feature] The Seal Sands area is now designated as the Teesmouth National Nature Reserve.

In the early 1800s the river was diverted to make it straighter thus saving money and time. Between Stockton-on-Tees and Middlesbrough the river meandered first south and then north of its current channel. Two "cuts", known as the Mandale cut and the Portrack cut were made to straighten its course. Before these cuts were made, the journey by sailing barge from Thornaby to Middlesbrough, allowing for tides and other factors, could take as long as the journey from the mouth of the Tees to London. The Mandale cut was the shorter of the two, at about 200m, with the Portrack cut being considerably longer, although the northern meander it removed was smaller than the southern meander. Neither meander is visible today, except for the flow of Stainsby Beck into a waterway which is marked on maps first as "The Fleet" and then "Old River Tees". The current Tees Barrage is close to the site of the Mandale cut.

Since the cuts were made, the river has continued to undergo alterations to make it deeper and more navigable. The channel has been made considerably narrower by dumping ship's ballast and ironworks slag along the former banks, increasing the scouring due to its natural flow. Maps made prior to 1900 [The History of the River Tees in Maps, 3rd. Ed. (2001), D.W. Pattenden, published by Cleveland and Teesside Local History Society ISBN 0 9507199 6 X] show that between Stockton and Middlesbrough the river flowed in a channel up to 300 m (330 yds) wide in places, with many shoals and sandbars. The modern channel varies between 100 and 200 m or even a bit more.

is a from English folklore who is said to inhabit the River Tees.

* [http://www.bridgesonthetyne.co.uk/intro3.html Bridges On the Tees]