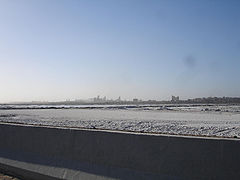 Dried out section of Lake Mariout, used for salt refining

Lake Mariout (Arabic: بحيرة مريوط‎) Buhayrat Mariyyut (also spelled Maryut or Mariut) is a salt lake, or rather brackish in northern Egypt. The lake area covered 200  km² at the beginning of the 20th century, but at the beginning of the 21th century it coveres only about 50  km².[1] It is separated from the Mediterranean Sea by the narrow isthmus on which the city of Alexandria was built. The lake shore is home to fisheries and saltworks. Some of the marshy areas around the lake have been reclaimed for new building as the city grows.

The name derives from Mareotis, the name of the lake in ancient times.

According to Philo of Alexandria, in the 1st century CE the monastic community of Therapeutae was located by the shores of this lake.

Nile perch live in the lake, although it principally needs fresh water to live in, and the lake contains some salt.