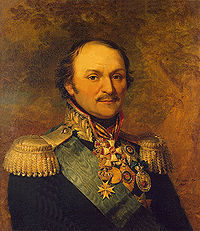 Platov's portrait from the Military Gallery of the Winter Palace (1825)

Count Matvei Ivanovich Platov (Pribilyanskoe August 6, 1757 - Epanchitskoe (near Taganrog) January 3, 1818) was a Russian general who commanded the Don Cossacks in the Napoleonic wars.

Disgraced by emperor Paul due to the Emperor's misleading courtiers, he was exiled to Kostroma, but later confined to the Peter and Paul Fortress.[1] However the Emperor after verifying his innocence awarded him the Commander Cross and Order of St.John of Jerusalem. However, this also led to his appointment on the ill-fated and conceived Russian expedition to India in 1800. Although the expedition only reached Orenburg, Platov was promoted to General Lieutenant and pokhodnii ataman of the Don Cossacks with transfer to their HQ at Novocherkask.

Upon Alexander I's ascension to the throne, he was appointed ataman of the Don Cossacks. In 1805, he ordered the Cossack capital to be moved from Starocherkassk to a new location, known as Novocherkassk.

During the Polish campaign of 1806-1807, Platov commanded a Cossack corps and fought against the French at Eylau, Guttstadt and Friedland, receiving the orderf St.George (2nd class), St. Alexander of Neva, and the Prussian orders of the Black and Red Eagles. In 1808-1809, he was active against the Turks in the Danube valley, including at the Battle of Silistra, receiving for it the Order of St.Vladimir (1st class). On 11 October 1809 Platov was promoted to General of Cavalry.[1] Soon after the end of the campaign he returned to the Don Host, and continued the reorganisation of local Cossack administration.

In 1812, Platov supported General Bagration's 2nd Western Army with a Cossack corps at Korelichi engagement, Mir and Romanovo, providing the rear guard force during retreat towards Moghilev. During the Russian counter-attack at Smolensk Platov fought at Molevo Boloto. At the Borodino he, together with General of Cavalry Fedor Uvarov conducted a movement against the French left (northern) flank, but failed to effectively threaten the French, resulting in Platov not receiving a decoration for the battle although ironically it was later disclosed that this raid had a dramatic effect on Napoleon, causing him to hold back the French Imperial Guard.[1] He scourged the French during their retreat from Moscow in 1812, for which he received the title of a count of the Russian Empire, and again after their defeat at the Battle of Leipzig 1813 in Saxony.

Later Platov accompanied emperor Alexander to London, where he was awarded a golden sword and an honorary degree by the University of Oxford. A full-length portrait was painted by Sir Thomas Lawrence for the Waterloo Chamber created at Windsor Castle by George IV, then Prince Regent. Platov then settled in the Cossack capital of Novocherkassk, where he established a school and was head of the local administration.

There are equestrian monuments to him in Novocherkassk and Starocherkassk. Gavrila Derzhavin dedicated the last of his odes to Platov's exploits. In Leskov's Levsha (1881), Don Cossack Platov is a prominent figure, even though his portrayal in that folk-styled tale is full of anachronisms.