Mortality rate is a measure of the number of deaths (in general, or due to a specific cause) in a population, scaled to the size of that population, per unit time. Mortality rate is typically expressed in units of deaths per 1000 individuals per year; thus, a mortality rate of 9.5 in a population of 100,000 would mean 950 deaths per year in that entire population, or 0.95% out of the total. It is distinct from morbidity rate, which refers to the number of individuals in poor health during a given time period (the prevalence rate) or the number of newly appearing cases of the disease per unit of time (incidence rate). The term "mortality" is also sometimes inappropriately used to refer to the number of deaths among a set of diagnosed hospital cases for a disease or injury, rather than for the general population of a country or ethnic group. This disease mortality statistic is more precisely referred to as "case fatality".

In regard to the success or failure of medical treatment or procedures, one would also distinguish:

Note that the crude death rate as defined above and applied to a whole population can give a misleading impression. The crude death rate depends on the age (and gender) specific mortality rates and the age (and gender) distribution of the population. The number of deaths per 1000 people can be higher for developed nations than in less-developed countries, despite life expectancy being higher in developed countries due to standards of health being better. This happens because developed countries typically have a completely different population age distribution, with a much higher proportion of older people, due to both lower recent birth rates and lower mortality rates. A more complete picture of mortality is given by a life table which shows the mortality rate separately for each age. A life table is necessary to give a good estimate of life expectancy.

During ancient times and the Middle Ages, the crude death rate was about 40 deaths per year per 1,000 people.[citation needed]

The ten countries with the highest crude death rate, according to the 2009 CIA World Factbook estimates, are:

See list of countries by death rate for worldwide statistics.

According to the World Health Organization, the 10 leading causes of death in 2002 were:

Causes of death vary greatly between first and third world countries. See list of causes of death by rate for worldwide statistics. 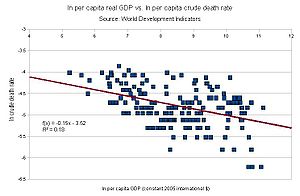 According to Jean Ziegler (the United Nations Special Rapporteur on the Right to Food for 2000 to March 2008), mortality due to malnutrition accounted for 58% of the total mortality in 2006: "In the world, approximately 62 millions people, all causes of death combined, die each year. In 2006, more than 36 millions died of hunger or diseases due to deficiencies in micronutrients".[4]

Of the roughly 150,000 people who die each day across the globe, about two thirds—100,000 per day—die of age-related causes.[5] In industrialized nations, the proportion is much higher, reaching 90%.[5]