It was built in 1625 and the first three Qing emperors lived there from 1625 to 1644. It is located in the center of the city of Mukden, Manchuria (Shenyang, China). 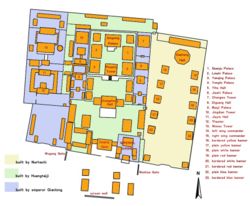 layout of the Mukden Palace

Early construction began in 1625 by Nurhaci. By 1631, additional structures were added under Emperor Huang Taiji.

The Mukden Palace was built to resemble the Forbidden City in Beijing. However, the palace also exhibits hints of Manchurian and Tibetan styles.

After the Qing Dynasty replaced the Ming Dynasty in 1644 in Beijing, the Mukden palace lost its status as the official residence of the Emperor. Instead, the Mukden Palace became a regional palace. 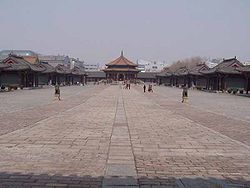 Dazheng Hall, the earliest building in the palace

In 1955, Mukden Palace was converted into the Shenyang Palace Museum.

In 2004, it was included on the UNESCO World Heritage List as an extension of the Imperial Palace of the Ming and Qing Dynasties site in Beijing.