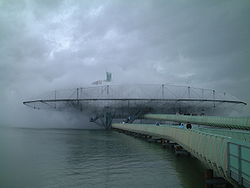 Blur Building at Expo.02 in Yverdon. 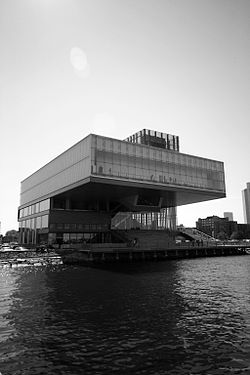 Diller Scofidio + Renfro is a New York City-based interdisciplinary design studio that integrates architecture, the visual arts, and the performing arts. Originally founded by Elizabeth Diller and Ricardo Scofidio in 1979, the firm is particularly well known for its interdisciplinary approach to architecture. Their influence stems as much, if not more, from their contributions to the theory and criticism of architecture as from their built works. These are sometimes in the form of written work, but more often are in the form of installation art, video art or electronic art.

In 1999-2004, the MacArthur Foundation presented Ms. Diller and Mr. Scofidio with the ‘genius’ award for their commitment to integrating architecture with issues of contemporary culture, making them the first recipients of the MacArthur Prize in the field of architecture[1]. They were made fellows of the Royal Institute of British Architects and were inducted into the American Academy of Arts and Sciences. Other prestigious awards and honors received by Diller Scofidio + Renfro include: the National Design Award from the Smithsonian; the Brunner Prize from the American Academy of the Arts and Letters; an Obie for an off-Broadway theater production; the AIA President’s Award; the AIA Medal of Honor; and AIA Design Awards for numerous projects. In 2003, the Whitney Museum of American Art held a retrospective of the studio’s work, recognizing the firm’s unorthodox practice. In 2009, Elizabeth Diller, Ricardo Scofidio, and Charles Renfro were featured in a one-hour segment with Charlie Rose. Fast Company named Diller Scofidio + Renfro the most innovative design practice in the profession and among the 50 most innovative companies in the world.[2]

The studio is led by three principals - Elizabeth Diller, Ricardo Scofidio, and Charles Renfro - who work collaboratively on the design of each project. Elizabeth Diller is currently a Professor in the School of Architecture at Princeton University[3]. Ricardo Scofidio is Professor Emeritus at Cooper Union[4]. Charles Renfro has served as a visiting professor at both Columbia University and Rice University[5].

Diller Scofidio + Renfro recently completed the Lincoln Center for the Performing Arts Redevelopment Project in New York, including the redesign of Alice Tully Hall, the renovation and expansion of The Juilliard School, the Hypar Pavilion Lawn and Restaurant, the expansion of the School of American Ballet, renovations to the New York State Theater lobby, the canopy entry to Fashion Week at Lincoln Center, as well as public spaces throughout the campus, and new Information Landscape. [6]

Phases 1 and 2 of the High Line, an urban park situated on an obsolete elevated railway stretching 1.5 miles long through the Chelsea area of New York City, were completed in 2009 and 2011, respectively. [7]

The Creative Arts Center for Brown University opened in February 2011. Diller Scofidio + Renfro completed the Institute of Contemporary Art in 2006, the first new museum to be built in Boston in 100 years. Slither, a housing complex in Gifu, Japan was completed in 2003 and Blur, a pavilion commissioned by the Swiss Expo, was completed in 2002.

Projects in construction or in design include: the Broad Art Museum in Los Angeles; the Berkeley Art Museum and Pacific Film Archive at the University of California, Berkeley; the Museum of Image & Sound on Copacabana Beach in Rio de Janeiro; the Dongguan Factory Complex in Shenzhen, China; the new Stanford University Art & Art History Building; and the Hirshhorn Museum and Sculpture Garden Seasonal Inflatable Pavilion on the National Mall in Washington D.C.

Installation and performance projects recently completed include Open House (in collaboration with Droog), How Wine Became Modern for SFMOMA , Be Your Self with the Australian Dance Theatre, the Terre Natale exhibition accompanying the United Nations Conference on Climate Change (COP15) in Copenhagen, Traveling Music for Evento 2009 in Bordeaux, Chain City for the 2008 Venice Biennale 11th International Architecture Exhibition, Arbores Laetae for the 2008 Liverpool Biennial, Does the Punishment Fit the Crime? for the Fondazione Sandretto Re Rebaudengo Turin, and Action Painting for the Beyeler Museum in Basel.