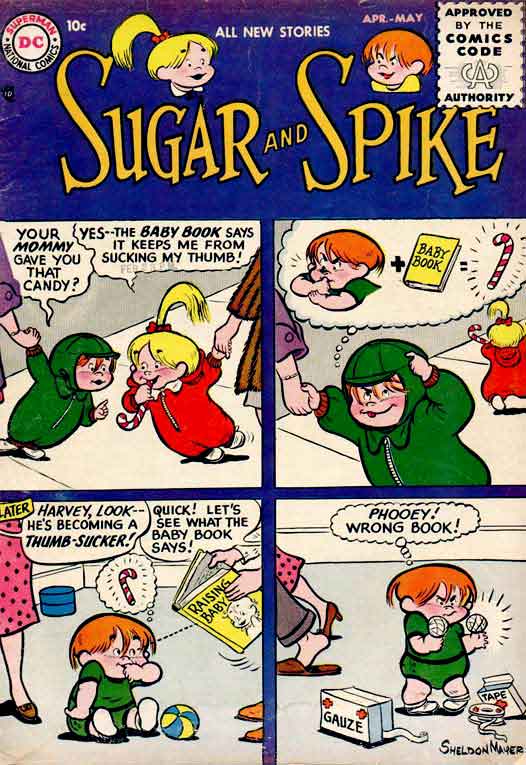 The comic was published in the up through the early 1970s for 98 issues, when, either due to Mayer's failing eyesight that limited his drawing ability or due to market shifts, "Sugar and Spike" ceased to appear. Later, after cataract surgery restored his eyesight, Mayer returned to writing and drawing "Sugar and Spike" stories, continuing to do so until his death in 1992; these stories appeared in overseas markets and only a few have been reprinted in the United States. The American reprints appeared in digest-sized comics. In 1992, "Sugar and Spike" #99 was published as part of the DC Comics Silver Age Classics series; this featured two previously unpublished stories by Mayer.

Mayer had an agreement with DC that no-one else could write Sugar and Spike. However, they have occasionally made cameo appearances in modern comic books, as theme park characters in " Spectacular", being baby-sat by Cassie Sandsmark in "" #113, and as teenagers on the crowded cover of "Legionnaires" #43. They were also spotted as decorations in the graphic novel, "Kingdom Come"

The comic featured the misadventures of two s named Sugar Plumm and Cecil "Spike" Wilson, who possessed the ability to communicate (via "") with each other and to other infants, but not to adults. It was in many ways similar to the more recent cartoon "", and shared ideas concerning baby-talk with ' novel; one notable feature was that "all" babies spoke the same baby-talk "language", allowing Sugar and Spike to speak with not only human infants, but baby animals as well. Another popular recurring feature was of the two leads, with outfits based on designs submitted by readers. Mayer used his own children, Merrily and Lanney, as inspiration for the strip.

In addition to the toddlers and their parents, recurring characters included:
* Little Arthur, a "big boy" too old for baby-talk. A spoiled brat and bully, Arthur torments Sugar and Spike, but is invariably outwitted by them in the end.
* Sugar's Uncle Charley, a bachelor and police officer who is a stereotypical "fun uncle", often playing with the kids and giving them gifts when he comes to visit.
*Bernie the Brain, a child genius who, despite being the same age as Sugar and Spike, is an accomplished scientist and inventor who speaks and understands "grown-up talk". When he first encounters Sugar and Spike, he requires a translating device of his own invention to teach him their baby-talk (having already progressed past that stage, intellectually). He enjoys the chance to be a normal kid with Sugar and Spike, while the pair loves playing with Bernie's various inventions. The two often seek out Bernie when they encounter something they don't understand, particularly something involving grown-up behavior.