Downtown Halifax is the city centre of the Halifax Regional Municipality, Nova Scotia. Located on the eastern-central portion of the Halifax Peninsula, on Halifax Harbour, it serves as the business, entertainment, and tourism hub of the region.

Downtown Halifax is the home of the Halifax Regional Council chamber at city hall. Offices for the mayor, city councillors, and additional staff can also be found downtown.

Downtown Halifax is the home of Nova Scotias Province House where the Nova Scotia House of Assembly meets. Government House, where the Lieutenant-Governor resides, is located on Barrington Street. The provincial government also has offices in several other downtown office buildings.

Downtown Halifax is considered to be a "people-friendly" downtown due to the ample number of hotels in the area, combined with pedestrian-friendly narrow streets, annual festivals and events, an array of interesting attractions, and many restaurants.[citation needed]

Downtown Halifax is the financial centre of Atlantic Canada. Aliant and Emera are headquartered in downtown Halifax. All Big Five Canadian banks have major operations in the CBD. The Bank of Canada also has one of its five Canadian regional offices located in the area. 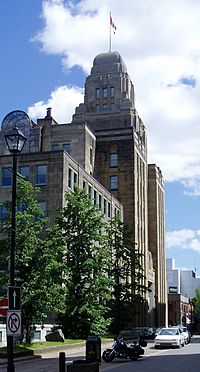 The Dominion Public Building in Halifax 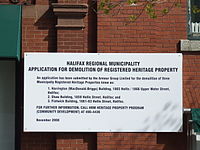 Development notice for heritage buildings having their facades restored for the controversial Waterside Centre development.

Unlike other historic Canadian cities such as Quebec[1] and Montreal[2] or comparably size New England cities such as Portland, Maine[3], Halifax has not preserved any heritage districts and has few intact blocks of historic buildings, although the downtown is known for the historic architecture of some individual landmark buildings. Demolition and urban renewal in the 1960s and 1970s replaced most of the downtown with blocks with office towers.[4] One of the few blocks to have retained its heritage character is Granville Mall, a pedestrian mall formerly part of Granville Street, made up of an array of shops and pubs in a conglomeration of rowed historic buildings built in the 1860s. It is known for the stone facades on each building. Historic Properties, a collection of 19th-century warehouses converted into shops and restaurants, is located nearby. Despite the heritage focus of these remaining blocks of heritage buildings, none are protected as heritage districts. Halifax developers have argued that economic growth precludes any greater heritage development. One of the only other intact blocks of downtown heritage buildings, the Morse Tea Block between Lower Water Street and Hollis faces demolition as part of a controversial Waterside Centre tower. In 2008, the developer was able to overturn the heritage status of buildings on the block, beginning with the 1840 Sweet Basil Building the first of the block to be demolished.

The downtown is home to individual government landmarks such as Province House, built in 1819 and home to the Nova Scotia House of Assembly. Citadel Hill, a 40-acre (160,000 m2) star-shaped fort, is another historic attraction in the downtown. Originally established with the arrival of Edward Cornwallis and the out break of Father Le Loutre's War (1749), the current fort was built in the Victorian Era as the hub of the historic defence system for the port. As a result, there is viewplane legislation that restricts vertical development that might block the direct line of sight from Citadel Hill to the harbour and George's Island in particular. Recent developments have challenged the viewplane limits.

There are several museums and art galleries in downtown Halifax. Pier 21, an immigrant entry point prominent throughout the 1930s, 40s, and 50s, was opened to the public as a National Historic Site of Canada in 1999. The Maritime Museum of the Atlantic is a maritime museum containing extensive galleries including a large exhibit on the famous Titantic, over 70 small craft and a 200-foot (61 m) steamship CSS Acadia. In summertime the preserved World War II corvette HMCS Sackville operates as a museum ship and Canada's naval memorial. The Art Gallery of Nova Scotia is housed in a 150 year old building containing over 9000 works of art. 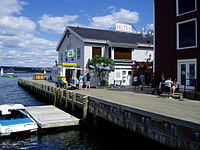 The waterfront in Downtown Halifax is the site of the Halifax Harbourwalk, a 3 km boardwalk popular amongst tourists and locals alike. Many mid-sized ships dock here at one of the many wharfs. The harbourwalk is home to a Metro Transit ferry terminal, hundreds of stores, Historic Properties, several office buildings, the Casino Nova Scotia, and several public squares where buskers perform, most prominently at the annual Halifax International Busker Festival in August.

Downtown Halifax, being home to many small shops and vendors, is a major shopping area in the HRM. It is also home to several small malls, including Scotia Square, Barrington Place Shops, and Maritime Mall. Numerous malls on Spring Garden Road are also located nearby.

The area is home to approximately 200 restaurants and bars, providing an interesting array of world cuisine.[5] There are also over 60 sidewalk cafes that open in the summer months. The nightlife is made up of bars and small music venues as well as Casino Nova Scotia, a large facility built partially over the water.

Neptune Theatre, a 43 year old establishment located on Argyle Street, is Halifax's largest theatre. It performs an assortment of professionally produced plays year-round. The Shakespeare by the Sea theatre company performs at nearby Point Pleasant Park. Eastern Front Theatre performs at Alderney Landing in Downtown Dartmouth which can easily be accessed from the area via the Metro Transit ferry service. 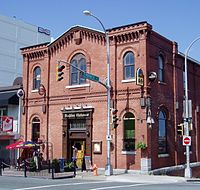 The Halifax Metro Centre is one of the largest buildings in Downtown Halifax, as well as the largest arena in Atlantic Canada. It is the home of the popular Halifax Mooseheads hockey team, and it also plays host to most of the major sporting events and concerts that visit Halifax. The Nova Scotia International Tattoo is held here every year. It is connected to the Downtown Halifax Link, and directly to the World Trade and Convention Centre. The Atlantic Film Festival, Atlantic Jazz Festival and the Halifax Pop Explosion also take place in some downtown venues.

Many of the Halifax region's hotels are located in the downtown area, with many major hotel chains maintaining a location here. There are also a considerable number of small hostels nearby.

Hotels in downtown Halifax have high occupancy rates, and several new hotels are being planned. A 27-storey hotel has also been approved by city council and a 17-storey hotel on the Midtown Tavern site near the Metro Centre, was planned but recently rejected by the Nova Scotia Utility and Review Board.

The waterfront area is home to a Metro Transit ferry terminal, which takes commuters across Halifax Harbour to terminals at Alderney Landing and Woodside in Dartmouth. These trips usually take around 12 minutes, and cost $2.25 for adults and $1.50 for seniors or children. Additional routes are being planned, and in mid-2005 a high-speed ferry route between the downtown terminal and a new Bedford terminal was demonstrated. The results were generally positive.

There are also many tour boats available at the waterfront, ranging from spacious paddleboats to amphibious vehicles such as the locally famous Harbour Hopper.

The streets in the downtown area are set in a grid pattern like the rest of the Halifax Peninsula, the way the town officials originally planned in the 18th century[6][7]. Some of these streets have been altered in recent years due to large developments, such as the Halifax Metro Centre, which split Albemarle Street into two sections when it was constructed. The street was renamed Market Street and only recently did one segment revert to its original name.

The downtown streets sometimes suffer from traffic problems, so to combat this city planners in the 1960s developed a controversial plan for a six-lane elevated freeway called Harbour Drive. This project was cancelled after protests over the proposed destruction of many historic buildings. All that remains of the project today is the Cogswell Interchange, a massive concrete structure that some consider a barrier between the North End and the downtown area. Its demolition or replacement with a less sprawling and wider-laned structure is currently being considered. Traffic problems are currently avoided through the use of one-way streets, and mass transit.

Many bus routes also pass through the downtown vicinity, with major terminals at Scotia Square and on Lower Water Street (adjacent to the ferry terminal). Barrington Street is the primary bus route through the area.

A mixed-use heliport operated by the Waterfront Development Corporation Limited at the South Battery Plaza (near Bishop's Landing) serves the downtown region. The Halifax Stanfield International Airport is a 30 minute drive from the area.