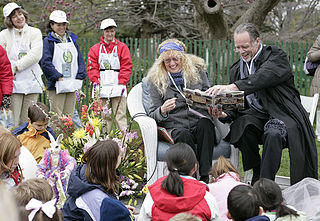 Children's book author Mary Pope Osborne and her husband Will Osborne read aloud to an ethusiastic crowd of young readers from her book, American Tall Tales on April 9, 2007, during the White House Easter Egg Roll.

Mary Pope Osborne (born May 20, 1949) is an American children's book author. She is best known for her award-winning and bestselling Magic Tree House series, which has been translated into over 20 languages and sold over 53 million copies.[1][2]

Mary Pope was born in Fort Sill, Oklahoma, the daughter of William Pope, a United States Army Colonel, and Barnette (nee Dickens), a homemaker. Osborne has a twin brother, Bill, a younger brother, and an older sister, Natalie, who has collaborated with her.[3][4] Until she was 15, Osborne's family relocated often for her father's career; the family lived in Oklahoma, Austria, Florida and on four different Army posts before ending up in North Carolina, where the family settled once her father retired.[5] Osborne credits her lifelong peripatetic tendencies and love of adventure to this nomadic childhood.[2][6]

After graduating from the University of North Carolina at Chapel Hill,[5] Osborne traveled extensively around the world before settling in New York City.[2] In 1976, she married Will Osborne, actor and children's playwright. He is Osborne's occasional collaborator.[7][8]

From 1993 to 1997, Osborne served as the 27th president of the Authors Guild, the oldest organization for writers in the United States.

Osborne was a published author for over 10 years before writing the first Magic Tree House entry.[2] Her first book, 1982's Run, Run, As Fast As You Can,[9] was a semi-autobiographical story of a young girl growing up in a military family and was published by Random House's Children's Book imprint. After several other books, mostly targeted to the youth audience, the publisher suggested to Osborne that she write a series. She spent the next year formulating the idea.[10]

Osborne eventually hit upon a formula for a series of chapter books with protagonists 8-year-old Jack and his 7-year-old sister Annie patterned on her own sibling relationships,[11] and living in the fictional pastoral Frog Creek, Pennsylvania.[11] Desiring to make it a time-travel series, Osborne happened on an old children's tree house on a walk and was inspired as to the means.

In 1992, the first of the Magic Tree House stories, Dinosaurs Before Dark, was published. The book opens with the siblings finding a magic tree house filled with books near their home. Osborne casts Morgan le Fay, fairy sister of King Arthur, as the head librarian of Camelot. When Jack and Annie read one of le Fay's books, they are transported with a wish to its time and setting.[3][11] The book established the mold for future releases. Osborne followed with 27 more in the same pattern, changing little more than the setting and adventure. At #29, Osborne altered the series and renamed it the "Magic Tree House Merlin Missions". The books now featured missions assigned to them by Merlin the magician.[12] Osborne also aged the protagonists 2 years, although she has stated in interviews that she does not intend to age the characters any further.[5]

Osborne's writing style is credited for the popularity of the series; it is most usually called by reviewers 'clear', 'well-paced', and, most notably, 'easy to read'.[13][14][15] Osborne tends to small cliffhangers at the end of chapters, which have been highlighted as a major ingredient in the books' appeal with the target age group. The series is most commonly considered to be educational, both with the historical and geographical accuracy of its content and in its vocabulary.[16][17][18]

The popularity of the series eclipsed that of Harry Potter as #1 on the New York Times Bestseller list in 2006.[19] The series has received honors from such organizations as the National Council of Teachers of English,[20] the American Booksellers Association[21] and the author received the Ludington Memorial Award from the Educational Paperback Association and a Lifetime Achievement Award from the Random House Sales Force.[1]

The Magic Tree House brand has spawned several other products. A non-fiction companion series, the Magic Tree House Research Guides, was launched in 2000 to expand on the facts behind the Magic Tree House entries. Osborne collaborates on these with her husband and sister, Natalie Pope Boyce.[22] A full-scale musical adaptation was created by Will Osborne; Magic Tree House: The Musical, premiered in September 2007.[1] A planetarium show; "Magic Tree House: Space Mission", is produced and presented exclusively at the Morehead Planetarium in Chapel Hill, North Carolina.[23] Audio and braille versions of the books are available[24] as well as companion programs aimed at educators using the books to illustrate history and writing skills.[25] However, Magic Tree House merchandise is rarely offered and usually for an educational purpose. For example, a small selection of t-shirts, bags, and pencils are available in support of Osborne's alma mater at the UNC Morehead Planetarium.[26]