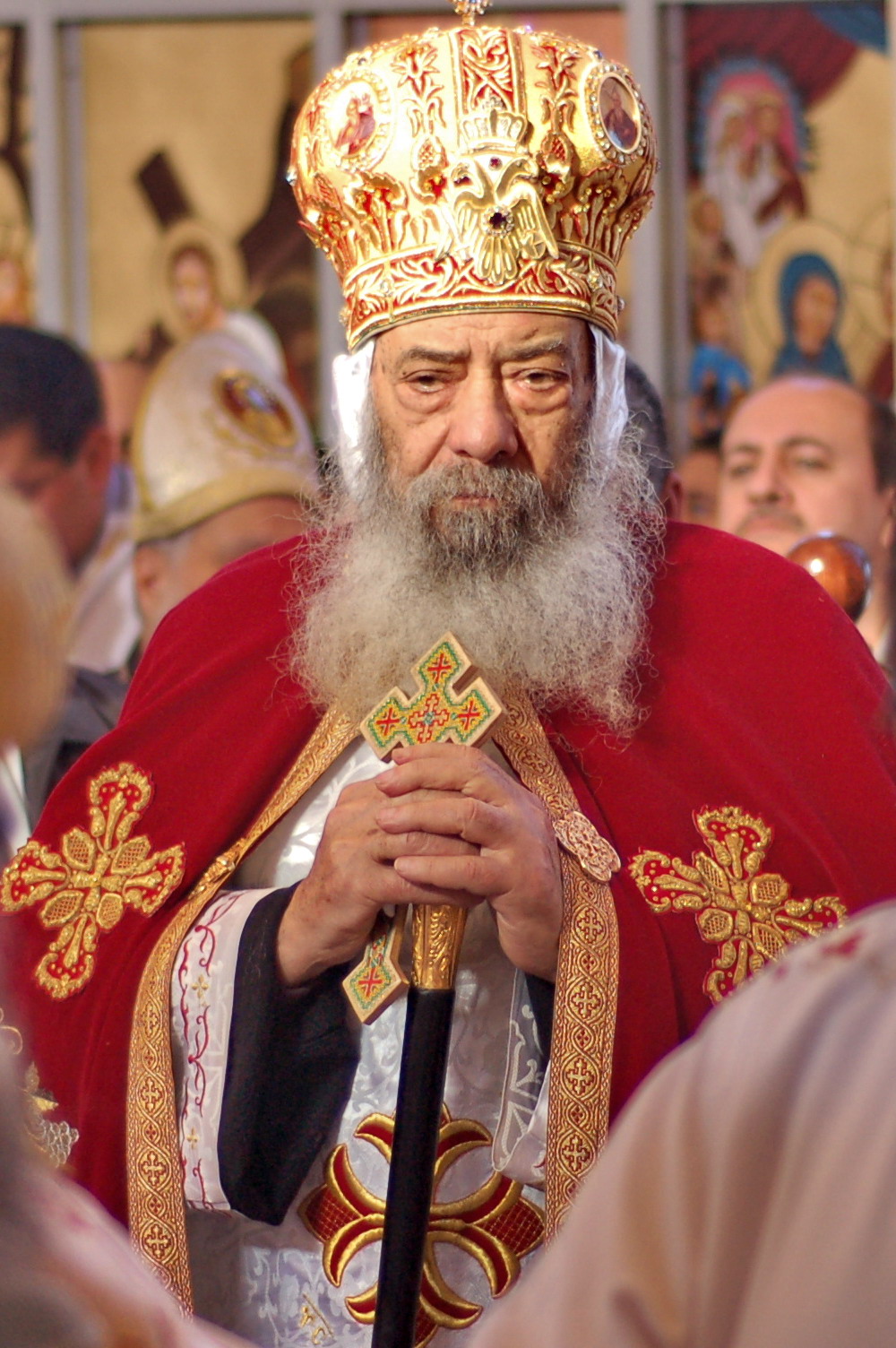 H.H. Pope Shenouda III of Alexandria (Coptic: Coptic|Ⲡⲁⲡⲁ Ⲁⲃⲃⲁ Ϣⲉⲛⲟⲩⲟϯ ⲡⲓⲙⲁϩ ϣⲟⲩⲙⲧ, : البابا شنوده الثالث) (born ), born "Nazeer Gayed" (Arabic: نظير جيد), is the 117th Pope of Alexandria and the Patriarch of All Africa on the Holy Apostolic See of Saint Mark the Evangelist of the .

By definition of his post he is the head of .

A graduate of and the Coptic Orthodox Seminary, Nazeer Gayed became a monk under the name "Fr. Antonios the Syrian" after joining the of the Ever-Virgin Mary the Theotokos, where he was later elevated to the priesthood.

H.H. Pope Cyril VI summoned Fr. Antonios to the patriarchate where he ordained him of Christian Education and Dean of the Coptic Orthodox Theological University, whereupon he assumed the name Shenouda, which was the name of a Coptic Saint and two previous Popes: Shenouda I (859- 880) and Shenouda II (1047–1077).

He has served as Pope of Alexandria since , , presiding over a worldwide expansion of the Coptic Orthodox Church. During his papacy, Pope Shenouda III has appointed the first-ever Bishops to preside over n dioceses that now contain over one hundred Churches, up from four in 1971, as well as the first Bishops in and the first Coptic Churches in .

He is known for his commitment to Christian unity and has, since the 1970s, advocated inter-denominational Christian dialogue. Also as all , and love and respect him.

Infobox Coptic Popestyles
name = Pope Shenouda III
dipstyle =
offstyle = Your Holiness
relstyle = Pope
deathstyle = NA|Born on , in , , he is the youngest of a family of eight children. By the age of 16, Pope Shenouda was active in the Coptic Sunday School movement.

Mr. Gayed was very active in his church and served as a Sunday School teacher, first at Saint Anthony's Church in Shoubra and then at Saint Mary's Church in Mahmasha [ [http://st-takla.org/Pope-1.html St Takla] ] .

After graduating from with a degree in history, he worked as a high school English and Social Studies teacher in Cairo by day, and attended classes at the Coptic Theological Seminary by night. Upon graduation from the seminary in 1949, he was chosen to teach New Testament Studies.

On , , Mr. Gayed joined the monastic life at the in ; he was given the name of Father Antonios el-Syriani (Anthony the Syrian, or Anthony of the ). For six years, from 1956 to 1962, he lived in a cave about seven miles away from the monastery, dedicating his time to meditation, prayer, and asceticism. Antonios el-Syriani was among the candidates nominated for the papal throne in 1956, but Pope Cyril VI was ultimately chosen for the post.

Later, at the , he became a monastic priest under the name of "Fr. Antonios el-Syriani". He lived as a .

Ordination as a Bishop

Enthroning as Pope of Alexandria

He was enthroned as Pope Shenouda III, the 117th Pope of Alexandria and of the of on , , nearly 9 months after the death of .

The ceremony was the first and as yet the only enthroning of a to take place in the new in Cairo.

Enthroning a Bishop as Pope

Some Coptic adherents argue that the choice of Pope Shenouda III as Pope (and Bishop) of the City of Alexandria is not canonical (against Canon 15 of Nicea and other Church Councils and Canons), because Pope Shenouda was already a bishop (without episcopate) in the 1960s. [http://www.rezgar.com/debat/show.art.asp?t=0&userID=981&aid=80855] , [http://web.archive.org/web/20031007020943/http://home.ptd.net/~yanney/The_Transfigured_Cross.pdf] However, there are also modern day examples from other Churches of patriarchs who were previously bishops before their election as patriarchs, e.g., and .

This issue has caused an ongoing dispute since 1928 in the Coptic Orthodox Church, and although has considered in the 1960s the General Bishops to be secretaries to the Pope in the degree of a , Pope Shenouda III, who was a general Bishop before, is sometimes considered to be the fourth Bishop to become a Pope after Popes John XIX (1928–1942), Macarius III (1942–1944) and Joseph II (1946–1956). [, "History of the Coptic Church", Volume 5.]

Following the arrest, imprisonment and subsequent execution of , Patriarch of , by the Marxist regime that had deposed Emperor in 1974, Pope Shenouda III refused to recognize the cleric who was installed as the Ethiopian Patriarch's successor. He argued that the removal of Patriarch Abune Tewophilos was illegal and un-canonical, and that in the eyes of the Church of Alexandria and the Pope of Alexandria, Abune Tewophilos remained the legitimate Patriarch of Ethiopia.

As the government of refused to acknowledge that the Patriarch had been executed, the refused to recognize any other Patriarch as long as was not confirmed dead. Thus formal ties between the Churches of Alexandria and Ethiopia were severed although they remain in full communion. Formal relations between the two churches resumed on July 13, 2007 [ [http://www.cathcil.org/v04/doc/English/visitseng.htm#11 "Common Declaration" of Pope Shenoudah III, Catholicos Aram I, and Patriarch Paulos - News and Media of the Armenian Orthodox Church, 22 July 2007] ]

On , , Egyptian president ordered Pope Shenouda into exile at the after Pope Shenouda's refusal in spring 1981 to hold public Church celebrations of Easter and to receive that year the President's delegates who are regularly sent to greet the Church and Coptic Orthodox Christians on such occasions.

In addition, eight bishops, twenty-four priests, and many other prominent were placed under arrest. Sadat replaced the church hierarchy with a committee of five bishops and referred to Pope Shenouda as the "ex-Pope." The rejected this decision by Sadat and counteracted. On , , more than three years after Sadat's 1981 assassination, President released Pope Shenouda from exile upon the decision of the Holy Synod of Bishops (which usually makes the final decision on Church matters along with the Pope of Alexandria). He returned to Cairo to celebrate the January 7th Christmas liturgy.

Another major difference of opinions between Sadat and Pope Shenouda III is the attitude of the latter regarding the normalization of the relations between and . In fact, there is currently (as of 2006) a papal decree issued by Pope Shenouda III that anathematizes any who visits the Christian holy places in and . [http://www.copticpope.org/downloads/audio/kods_trip.zip] According to that decree, such Copts are automatically banned from receiving Holy Communion in the . Pope Shenouda III has repeatedly declared that Christians must only visit Jerusalem hand in hand with their Muslim brothers after the conflict with Israel is resolved to the satisfaction of all parties.

An additional motivation for supporting the ban on trips to Jerusalem, beyond solidarity, involves some tension that arose over a dispute about possession of some property in the Church of the Resurrection which was removed from the possession of the Coptic Orthodox Church.

Pope Shenouda III has been involved in theological disagreements with Father concerning the issue of .

As result of the disagreement with Father , Pope Shenouda III published 8 booklets explaining his view of theosis. Pope Shenouda taught others about the issue in the theological seminary of and also in the seminary of .

Supervised worldwide growth of the Church

The papacy of Pope Shenouda III has seen a worldwide expansion of the : while there were only four Coptic Orthodox churches in all of in 1971, today there are more than two hundred. [ [http://www.cnewa.org/ecc-bodypg-us.aspx?eccpageID=6&IndexView=toc CNEWA – The Coptic Orthodox Church ] ] [http://www.sacotc.org/docs/2186_CopticChurch_broc.pdf]

The growth of the American Coptic Orthodox Church has been such that in 1996, Shenouda installed the first two Diocesan Bishops for the United States &mdash; one for and the other for the Southern United States plus two General Bishops, Exarchs of the Throne in the Archdiocesan Center of North America in New Jersey.

In the , Mission churches have been founded in , , and in the in St. Thomas.

Moreover, Pope Shenouda's tenure has also included the founding of the first Coptic Orthodox Church in South America (in São Paulo, ), and the second, in . In February 2006, Pope Shenouda visited and consecrated the church of St. Mark in São Paulo, Brazil and the church of St. Mary and St. Mark in Santa Cruz, Bolivia. Later, on the Feast of Pentcost 2006, the two monk priests of the two churches were consecrated bishops, Bishop Agathon of Brazil and Bishop Youssef of Bolivia.

In and , there are currently 28 churches, and in 1999, Shenouda enthroned Bishop Suriel, the first bishop for Melbourne, Canberra, Tasmania, South Australia, Western Australia and New Zealand. Recently, Bishop Suriel established two churches in .

In June 2002, Bishop Daniel was officially ordained and appointed the first bishop with jurisdiction for the Australian states of New South Wales, Queensland, and the Northern Territory, as well as South and North East Asia.

In Europe, there are currently over fifty churches and ten bishops. Africa currently has two bishops serving, as Patriarchal Exarchs, in missions in nine African countries.

When gained political independence from , Eritrean President requested that the local Church be made independent from the , which required a Patriarch enthroned by the Coptic Orthodox Pope of Alexandria.

Previously, the church in Eritrea was an Archdiocese of the . The Patriarch and Synod of the Ethiopian Orthodox Church reluctantly agreed to the elevation of the Church in Eritrea. Pope Shenouda III thus anointed the first Patriarch of Eritrea with the name Patriarch Philip I (Abuna Philipos of Eritrea). This was the second consecration of a Patriarch by the Pope of Alexandria in the twentieth century (the first Patriarchal consecration in the twentieth century occurred when Pope Cyril VI of Alexandria consecrated the first Catholicos-Patriarch of Ethiopia in 1959.)

In 1973, Pope Shenouda III became the first Coptic Orthodox Pope of Alexandria to meet the Pope of Rome in over 1500 years. In this visit, Popes Shenouda III and signed a common declaration on the issue of and agreed to further discussions on Christian unity. There have also been dialogues with various Protestant churches worldwide.

Pope Shenouda III is well known for his deep commitment to Christian unity. In an address he gave at an ecumenical forum during the International Week of Prayer in 1974, he declared, "The whole Christian world is anxious to see the church unite. Christian people, being fed up with divisions, are pushing their church leaders to do something about church unity and I am sure that the is inspiring us."

Under his leadership, the Coptic Orthodox Church of Alexandria has become a full member of the , the , the , the , the , and the . In May 2000, he established the Office of Ecumenical Affairs, in the Archdiocese of North America.

Pope Shenouda III has emphasized Christian Unity in his work, believing it to be founded upon a unity of faith and not of jurisdiction. As a result, he has paid many visits to the various sister Orthodox churches and their patriarchs, such as those of Constantinople, Moscow, Romania, and Antioch, with the goal of a full communion of these churches with the .

He also won, in the year 2000, the for the Promotion of Tolerance and Non-Violence by UNESCO Director-General Koichiro Matsuura on the recommendation of an international jury.

Pope Shenouda III has been the editor-in-chief of "El-Keraza Magazine", the official publication of the Coptic Orthodox Church of Alexandria, since 1962. He became the first Patriarch of Alexandria since the fifth century to have been head of the Theological Seminary and continues to lecture at the Seminary branches in , and several other Theological Seminaries created in different dioceses in Egypt and abroad, and at the Higher Institute of Coptic Studies. He also established other branches of the Seminary in Egypt as well as abroad. Pope Shenouda is also the author of over 100 books.

In his new book, " [http://haveyouseentheoneilove.com Have You Seen the One I Love] ", Pope Shenouda contemplates the Song of Songs.

*In Abo Talat, there's a street named after Pope Shenouda III. Fact|date=September 2007
* He baptised 29 children in December 1989, Melbourne Australia. All the children were baptised in one day.Fact|date=July 2008
* At one stage he had the third highest IQ in the world.Fact|date=October 2008