Cultural geography is a sub-field within human geography. Cultural geography is the study of cultural products and norms and their variations across and relations to spaces and places. It focuses on describing and analyzing the ways language, religion, economy, government and other cultural phenomena vary or remain constant, from one place to another and on explaining how humans function spatially.[1] 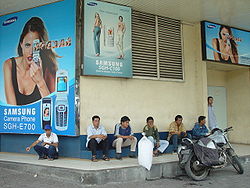 Globalization and Mall Culture in Jakarta

The areas of study of cultural geography are very broad. Among many applicable topics within the field of study are:

Though the first traces of the study of different nations and cultures on Earth can be dated back to ancient geographers such as Ptolemy or Strabo, cultural geography as academic study firstly emerged as an alternative to the environmental determinist theories of the early Twentieth century, which had believed that people and societies are controlled by the environment in which they develop.[7] Rather than studying pre-determined regions based upon environmental classifications, cultural geography became interested in cultural landscapes.[8] This was led by Carl O. Sauer (called the father of cultural geography), at the University of California, Berkeley. As a result, cultural geography was long dominated by American writers.

Sauer defined the landscape as the defining unit of geographic study. He saw that cultures and societies both developed out of their landscape, but also shaped them too.[9] This interaction between the 'natural' landscape and humans creates the 'cultural landscape'.[10] Sauer's work was highly qualitative and descriptive and was surpassed in the 1930s by the regional geography of Richard Hartshorne, followed by the quantitative revolution. Cultural geography was generally sidelined, though writers such as David Lowenthal continued to work on the concept of landscape.

In the 1970s, the critique of positivism in geography caused geographers to look beyond the quantitative geography for its ideas. One of these re-assessed areas was also cultural geography.

Since the 1980s, a "new cultural geography" has emerged, drawing on a diverse set of theoretical traditions, including Marxist political-economic models, feminist theory, post-colonial theory, post-structuralism and psychoanalysis.

Drawing particularly from the theories of Michel Foucault and performativity in western academia, and the more diverse influences of postcolonial theory, there has been a concerted effort to deconstruct the cultural in order to make apparent the various power relations. A particular area of interest is that of identity politics and construction of identity.

Examples of areas of study include:

Some within the 'new cultural geography' have turned their attention to critiquing some of its ideas, seeing its views on identity and space as static. It has followed the critiques of Foucault made by other 'poststructuralist' theorists such as Michel de Certeau and Gilles Deleuze. In this area, non-representational geography and population mobility research have dominated. Others have attempted to incorporate these critiques back into the new cultural geography.