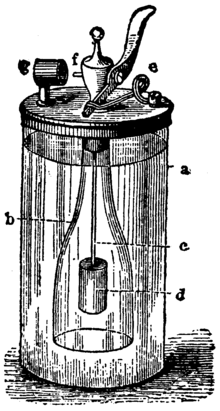 Döbereiner's lamp is a lighter invented in 1823 by the German chemist Johann Wolfgang Döbereiner, the lighter is based on the Fürstenberger lighter and was in production until ca. 1880. In the jar, zinc metal reacts with sulfuric acid to produce hydrogen gas. When a valve is opened, a jet of hydrogen is released and bursts into flame. The ignition is catalyzed by platinum metal.

Examples of the lighter are exhibited in the Deutsches Museum and in the old pharmacy in the Heidelberg Castle.