Daniel Robert "Bob" Graham (born November 9, 1936) is an American politician. He was the 38th Governor of Florida from 1979 to 1987 and a United States Senator from that state from 1987 to 2005. Following a failed bid for the Democratic Party nomination in the 2004 presidential race, Graham was considered a possible running mate for John Kerry.

Graham dropped out of the race for the Democratic presidential nomination on October 6, 2003 and announced his retirement from the Senate on November 3, 2003.

Graham is now concentrating his efforts on the newly established Bob Graham Center for Public Service at his undergraduate alma mater, the University of Florida. He also serves as Chairman of the Commission on the Prevention of WMD proliferation and terrorism and advocates for the recommendations in the Commission report, World at Risk.

Graham is the son of Ernest "Cap" Graham, a Florida state senator, mining engineer and dairy/cattleman, and Hilda Simmons Graham, a schoolteacher. He is the youngest of four children. His siblings are the late Philip Graham, former publisher of the Washington Post; the late William Graham of Miami Lakes, Florida; and the late Mary Crow.

Bob Graham attended Miami Senior High School from 1951 to 1955, he was Student Body President his senior year. He was also president of Key Club, the Kiwanis service organization. While at Miami High Graham was the recipient of the Sigma Chi Award, the school's highest honor. He received a bachelor's degree in 1959 in political science from the University of Florida, where he was a member of the Sigma Nu fraternity. While at UF he was inducted into the University of Florida Hall of Fame and was inducted into Florida Blue Key. He went on to receive an LLB from Harvard Law School in 1962. His eldest brother, Philip (1915–1963), was also a Harvard Law alum.

Bob Graham's campaign trademark was to work a full, eight-hour day at various jobs which represented Florida's constituents. He began his "Workdays" in 1974, teaching a semester of civics at Miami Carol City Senior High School in Miami while serving in the Florida Senate. At that time, Bob Graham was on the Education Committee. After a speech, M. Sue Riley, an English teacher at Carol City, approached Bob Graham and said, "The only problem with members of the Education Committee is nobody has any experience in education." Bob Graham was taken aback at that assertion and asked, "Well, what can I do about that?" A few months later, Ms. Riley contacted Senator Graham with a proposal to teach the next semester of civics. Following that teaching experience, he performed 99 additional workdays prior to his successful 1986 campaign for U.S. Senate. Graham has continued doing workdays throughout his tenure as governor and in the United States Senate. His jobs have included service as a police officer, busboy, railroad engineer, construction worker, fisherman, garbageman, factory worker, and teacher. On No. 365, he checked in customers, handled baggage and helped serve passengers on US Airways. He totaled 386 days.

Bob Graham was elected Governor of Florida in 1978 after a seven-way Democratic primary race in which he initially placed second to Robert L. Shevin. His supporters at the time dubbed themselves "Graham crackers." With this victory, he realized his father's dream: Cap Graham had run unsuccessfully for the Democratic nomination to be Governor of Florida back in 1944. Graham was re-elected in 1982 with 65% of the vote, defeating Republican nominee Skip Bafalis.

Graham emphasized education, and placed a focus on improvement of the public universities in the state. By the end of his second term the state university system was among the first quartile of state systems in America, and its public schools and community colleges had substantially improved their academic standing.

In addition, Graham's administration focused on economic diversification and environmental policies. During his tenure as Governor, the state added 1.2 million jobs, and for the first time in state history the per capita income of Floridians exceeded the US average. For three of his eight years Florida was rated by the accounting firm Grant Thornton as having the best business climate of all states in the union.

Graham also launched the most extensive environmental protection program in the state's history, focused on preserving endangered lands. During his tenure thousands of acres of threatened and environmentally important lands were brought into state ownership for permanent protection. His keystone accomplishment was the establishment of the Save the Everglades program, which as now been joined by the federal government in a joint effort.

Graham left the Governorship with an 83% approval rating.

During his 18 years in the Senate, Graham served on the environment and finance committees. He was also active on veteran's issues and foreign policy, including chairing the US-Spain Council, for which he received the highest civilian recognition for a non-Spaniard by King Juan Carlos.

Bob Graham was a member of the New Democrat Coalition.

He has a well-known habit of logging his daily activities on color-coded notebooks, which some say may have cost him a spot on past vice-presidential tickets. All of the notebooks are now housed at the University of Florida library. A great champion for his home state, Graham always kept Florida orange juice on hand in his Senate office and was rarely seen without his trademark Florida tie.

Graham announced his candidacy for President of the United States in the 2004 election on the Democratic ticket on February 27, 2003. However, on October 7, 2003, with polls showing him in last place among a field of ten candidates, he announced he was ending his presidential campaign, saying he started his campaign too late and had trouble raising money. In November, he announced that he would not seek another term in the Senate.

After John Kerry became the presumptive Democratic nominee for president in March 2004, there was some discussion in the media that Graham might be on the short list of Kerry's choices for vice president, presumably at least in part because having Graham on the ticket might have helped Kerry to win Florida in the presidential election. 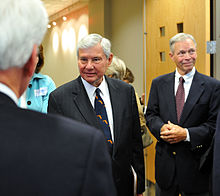 Former Senator Graham (center), with former Florida Governor Kenneth "Buddy" MacKay (right) at the dedication ceremony for Pugh Hall, home of the Graham Center for Public Service at the University of Florida

After teaching at Harvard University for the 2005–2006 academic year, Graham is now focused on founding two centers to train future political leaders, one at the University of Florida – where he earned his bachelor's degree in political science in 1959 – and one in his hometown at University of Miami.

The UF Center, known as the Bob Graham Center for Public Service, is housed in the university's College of Liberal Arts and Sciences and provides students with opportunities to train for future leadership positions, meet current policymakers and take courses in critical thinking, language learning and studies of world cultures. On February 9, 2008, Mike Haridopolos Hall was dedicated on the UF campus – funded by longtime friend and fraternity brother of Graham, Jim Pugh, and his wife Alexis – and serves as home to the center, as well as the university's oral history and African and Asian languages programs.

In the Spring of 2009 Bob Graham published a book titled "America, The Owner's Manual: Making Government work for you" which aims to inspire and teach citizens how they can participate in their democracy in effective ways.

Bob Graham currently serves as the Chairman of the Commission on the Prevention of Weapons of Mass Destruction Proliferation and Terrorism. Graham has also been sworn in as a member of the Financial Crisis Inquiry Commission, established by Congress to examine the global and domestic causes of the recent financial crisis. The Commission will provide its findings and conclusions in a final report due to Congress on December 15, 2010. Also in 2010, Graham was named co-chairman of the National Commission on the BP Deepwater Horizon Oil Spill and Offshore Drilling in the wake of the Deepwater Horizon oil spill.[5]

The Graham dairy farm was redeveloped into Miami Lakes, a residential and commercial community, in 1963 under the leadership of Bob Graham's brother, William. To this day, Bob Graham still owns a significant share of the Graham Companies, which is estimated to be worth $10 million. To avoid a potential conflict of interest, his various investments, including his share in the Miami Lakes development, are managed by a proxy and reported to Graham at the end of each year. Graham's total net worth is reported to be between $7.35 million and $31.7 million[citation needed].

On May 6, 2006 at the Spring commencement for the College of Liberal Arts and Sciences, the University of Florida awarded Bob Graham an honorary doctorate, the Doctor of Public Service.