The name of the province (Neeric 1165-81) comes from an old word när (narrow) which refers to the narrow ridge where the church of Norrbyås (Nerboahs 1275) is situated. What the rest of the name means is not clear.[2] In English sometimes also Nerike (an archaic spelling of the province) and Nericia (the Latin name) is used for the province. 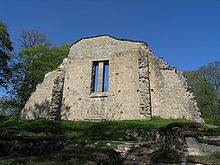 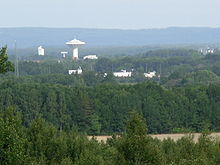 View over the surroundings of Örebro, Närke

The traditional provinces of Sweden serve no administrative or political purposes, but are historical and cultural entities. In the case of Närke, the province makes up the southern part of Örebro County.

Arms granted in 1560, and revised a decade or so later with the current one. The arms is represented with a ducal coronet. At the centre there are two crossbow darts was - the crossbow being the favourite weapon of the peasants. Blazon: "Gules between four Roses Argent two Arrows in saltire Or points upward pointed Argent." The Närke arms is one of the components of the coat of arms for Örebro County, granted in 1944.

The oldest city in Närke was Örebro, receiving its privileges around 1200. After that, Askersund was chartered in 1643 and Kumla in 1942. City status in Sweden was discontinued as of 1971, so these are historical titles.

Norse mythology mentions three kings of Närke, Nidud, Olof the Sharp-sighted and Sporsnjall. Nidud was a villainous king in the lay of Wayland the smith, Olaf aided the Norwegian king Vikar in battle, and Sporsnjall was burnt to death by Ingjald Ill-ruler together with five other petty kings.

Närke was renowned for its warlike peasants and when coat-of-arms for the province was granted for the funeral of Gustav Vasa in 1560 two crossbow darts was the central symbol - the crossbow being the favourite weapon of the peasants.

In Närke there are also a number of medieval castles. The most important and best preserved one is located in Tarsta at Sköllersta.

Since 1772, Swedish Princes have been created Dukes of various provinces. This is solely a nominal title.

The province of Närke has 5,200 ancient remains.

The old subdivisions of provinces were the Hundreds of Sweden. In Närke, the hundreds were:

Football in the province is administered by Örebro Läns Fotbollförbund.