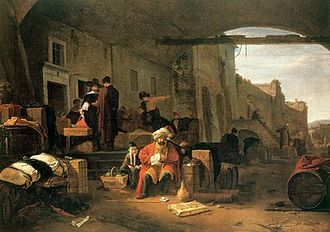 Merchants from Holland and the Middle East trading.

A merchant is a businessperson who trades in commodities that were produced by others, in order to earn a profit.

Merchants can be one of two types:

A merchant class characterizes many pre-modern societies. Its status can range from high (the members even eventually achieving titles such as that of Merchant Prince or nabob) to low, as in Chinese culture, owing to the presumed distastefulness of profiting from "mere" trade rather than from labor or the labor of others as in agriculture and craftsmanship.

In the United States, "merchant" is defined (under the Uniform Commercial Code) as any person while engaged in a business or profession or a seller who deals regularly in the type of goods sold. Under the common law and the Uniform Commercial Code in the United States, merchants are held to a higher standard in the selling of products than those who are not engaged in the sale of goods as a profession.

The UCC also contains a "merchant's confirmation" exception to the Statute of Frauds. The Merchant Confirmation Rule states that if one merchant sends a writing sufficient 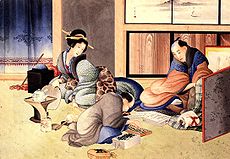 "A merchant making up the account" by Katsushika Hokusai

Under common law, an offer to purchase can be revoked at anytime before acceptance. However, dealing between merchants, an offer can be made 'firm' or irrevocable for a certain period of time. In order for a merchant to create a 'firm offer' it must satisfy the Statute of Frauds. When dealing between merchants, the Statute of Frauds will be satisfied so long as it satisfies an authentication under the UCC Section 2-205 (a signature/mark will do). This is called the firm offer rule. Provided this occurs, the offer will stay 'firm' for a period of 90 days. If the offer is for a longer period courts will limit the offer period to 90 days.