Flight of the Conchords

They were named Best Alternative Comedy Act at the 2005 US Comedy Arts Festival and Best Newcomer at the Melbourne Comedy Festival, and they received a nomination for the Perrier Comedy Award at the 2003 Edinburgh Festival Fringe. The duo's live performances have gained them a worldwide cult following.[1]

McKenzie and Clement were flatmates at Victoria University of Wellington, where they were studying film and theatre before forming Flight of the Conchords in 1998. They first performed as part of a five-man group called So You're a Man, which included Taika Waititi, and had a small but loyal following in New Zealand and Australia.[2]

The band performed its first televised performances over four nights (3–6 May 2000) on Newtown Salad, a show on Wellington's short-lived local TV station "Channel 7" (later renamed "WTV"). The songs, in order, were "Bowie", "Ladies of the World", "Petrov, Yelyena and Me", and "Hotties".[3]

They performed at the Edinburgh Festival Fringe in 2002 and 2003, when they were nominated for the Perrier Award.[4] They also performed at the Melbourne International Comedy Festival where they won the Best Newcomer Award. They were later featured in a 2004 campaign for British mobile phone retailer Phones 4U.[5] They were also featured on Australia's ABC TV in the show Stand Up![6]

HBO gave the group a special on their Friday night half-hour stand-up comedy series One Night Stand. They then headlined at the opening weekend at Comix comedy club where they recorded two tracks included on 2007's "The Distant Future". They also performed at the South by Southwest Music Festival in Austin, Texas. During their visit to Texas, they recorded a documentary titled Flight of the Conchords: A Texan Odyssey, which aired on New Zealand's TV3 in late 2006.[7]

In June 2007, the band performed on David Letterman's Late Show[8] and were also interviewed by Terry Gross on the NPR radio show Fresh Air. The band appeared at the 2007 Bonnaroo Music Festival in Manchester, Tennessee.[9] The EP The Distant Future was released. It was produced by Mickey Petralia and recorded in Los Angeles and New York by Petralia and engineer Matt Shane. The live portions were taken from concerts at Comix comedy club in New York City. On 24 October 2007, Flight of the Conchords appeared as the musical guests on Late Night with Conan O'Brien.

On 13 February 2008, Flight of the Conchords had their first post-Grammy concert, a freebie show, at a small Wellington video store called Aro Video.[12] On 5 March 2008, Jemaine & Bret performed at a private show at 'The Depot' in Salt Lake City, Utah. The performance was for the 2008 Omniture (Web analytics Conference). The following day, Flight of the Conchords performed in Cahn Auditorium at Northwestern University. On 24 April 2008, Jemaine and Bret played a free show at Amoeba Music in Hollywood, CA. On 28 May 2008, Flight of the Conchords performed at the Google I/O conference in San Francisco. The band performed on the Main Stage of the Sasquatch! Music Festival on Monday 26 May 2008 at The Gorge Amphitheatre in central Washington State. On 12 July 2008, Flight of the Conchords performed at Sub Pop's 20th Anniversary Music Festival. On 31 March 2009 the duo performed in Masterton New Zealand to 2000 locals as a benefit for Jemaine's old college Makoura College raising around NZ$80,000 prior to setting off on a 50 date tour of the US. They also appeared on the season four finale of Tim and Eric Awesome Show, Great Job! replacing Tim and Eric briefly during a high stakes game of tennis. 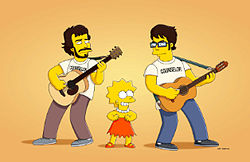 The duo on The Simpsons alongside Lisa Simpson

The duo guest starred as a pair of camp counselors in "Elementary School Musical", the season premiere of the 22nd season of The Simpsons, which aired 26 September 2010.[13]

In 2004, the band created a radio series for BBC Radio 2.[14] Largely improvised, the series was based on the band's search for commercial success in London. It featured Rob Brydon as their narrator,[14] Rhys Darby as their manager and Jimmy Carr as a devoted fan called Kipper. The radio series is clearly a progenitor of the television series: the plot is similar (the band arriving in a foreign country to make their fortune; Rhys Darby playing their manager and calling band meetings; and many of the songs were later used in the television series).[15]

The duo starred in a television series for HBO, titled Flight of the Conchords, which premiered in the United States in June 2007. The series simultaneously premiered in Canada on The Movie Network and Movie Central, and was also shown on The Comedy Network.

The fictional series revolves around the pair as they try to achieve success as a band in New York City and try to develop an American fan base. The regular cast includes fellow comedians Rhys Darby as Murray, Arj Barker as Dave, and Kristen Schaal as their obsessed fan Mel. This show also features many other comedians in guest starring roles. Their songs are woven into the plot of each episode. The first season consisted of 12 episodes. The show received an Emmy nomination for Best Comedy.[17]

On 10 December 2009, the duo and co-creator/director James Bobin announced via their website that the show would not return for a third season.[20]

Surprisingly, given their success outside New Zealand, Bret and Jemaine are rumoured to have had project proposals continuously denied funding by New Zealand public television. As Brannavan Gnanalingam notes in The Lumiere Reader, rumour has it that NZ TV3 denied funding because Bret and Jemaine's humour was deemed "too Wellington", meaning their humour would not work with the average New Zealander outside of Wellington.[21]

Jemaine Clement, Bret McKenzie and Rhys Darby (the main trio from Flight of the Conchords) appeared in a horror comedy titled Diagnosis: Death. The film was released on 3 August 2009.

Extra video content can be seen on the HBO Flight of the Conchords site, for example Dave's Pawn Shop Video.[22] In May 2010, Bret and Jemaine also appeared in a web video on bbc.co.uk in which they officially opened the BBC's Comedy website.[23]