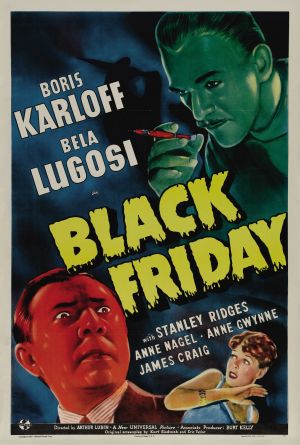 "Black Friday" is a 1940 film starring . , although second-billed, has only a small part in the film and does not appear with Karloff.

Karloff plays a famous doctor, Dr. Ernest Sovac, whose best friend, a bookish college professor (played by ), is run down while crossing a street. In order to save his friend's life, Sovac implants part of another man's brain into the professor's. Unfortunately, the other man was a gangster who was involved in the accident. The professor recovers but at times behaves like the gangster, and his whole personality changes. Sovac is horrified but also intrigued, because the gangster has hidden $500,000 USD somewhere in the city. The doctor continues to treat his friend and, when the professor is under the influence of the gangster's brain, Karloff attempts to have the man lead him to the fortune. plays a gangster also trying to get his hands on the cash.

The original script cast Lugosi as the doctor and Karloff as the professor. For unknown reasons, Karloff insisted on playing the doctor. Rather than a straight switch though, Lugosi was given the minor role of a rival gangster, while character actor Stanley Ridges was brought in to play the professor.

The film provided a rare opportunity for the now forgotten Ridges to display his considerable acting ability, [ [http://movies.msn.com/celebs/celeb.aspx?c=241218 MSN Movies] ] and gave him one of his finest screen roles (Ridges was nearly always one of many supporting cast members, and seldom was cast in roles where he could really make an impression. He is also remembered as Professor Siletsky in the original "To Be or Not to Be", and as the inspector in the thriller, "The Suspect").