Maurice Le Noblet Duplessis (French pronunciation: [dzyplɛsi]; 20 April 1890 – 7 September 1959) served as the 16th Premier of the Canadian province of Quebec from 1936 to 1939 and 1944 to 1959. A founder and leader of the highly conservative Union Nationale party, he rose to power after exposing the misconduct and patronage of Liberal Premier Louis-Alexandre Taschereau. [1]

His reign is often referred to in Quebec as La grande noirceur ("The Great Darkness"), especially due to the prevalent corruption and for the scandal surrounding the Duplessis Orphans. During the time, the Liberal opposition was unsuccessful in challenging Duplessis' power. Duplessis championed rural areas, provincial rights, anti-Communism and opposed the trade unions.

Born in Trois-Rivières and son of local politician Nérée Le Noblet Duplessis, Duplessis studied at the Séminaire Saint-Joseph de Trois-Rivières, obtained a law degree from Université Laval's Montréal branch (later renamed Université de Montréal) and was admitted to the Barreau du Quebec in 1913. He returned to his home town to practice law until running for public office. He was a life-long bachelor. 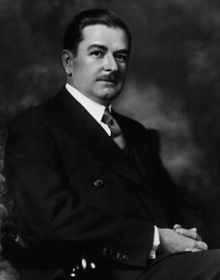 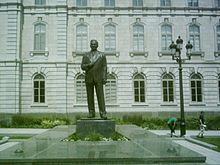 Duplessis first won a seat as a Conservative Party of Quebec candidate in the 1927 Quebec election. In the 1931 election, he was reelected in his seat, but Conservative leader Camillien Houde lost both the election and his own seat. The Conservative caucus chose C. E. Gault to be interim Leader of the Opposition but, after Houde resigned as party leader in 1932, Duplessis won the leadership of the party during the 1933 convention over the only other candidate, Onésime Gagnon.

Two weeks before the 1935 provincial election, he engineered a coalition with Paul Gouin's Action libérale nationale (ALN), a party of dissident reform Liberals and nationalists who had quit the governing Parti libéral du Québec. While he lost that election, Duplessis was soon able to exploit a patronage scandal involving the family of Premier Louis-Alexandre Taschereau to force Taschereau's resignation.

Gouin withdrew his support from Duplessis on June 18, 1936, but the ALN caucus sided with Duplessis and joined with his Conservative caucus to formally merge into the Union Nationale party. Duplessis and the UN won the August 1936 election in a landslide, putting an end to thirty-nine consecutive years of Liberal rule. Duplessis's first government was defeated in the 1939 election, a snap election called by the premier in hopes of exploiting the issue of Canadian participation in World War II.

Duplessis returned as premier in the 1944 election, and held power without serious opposition for the next fifteen years, until his death, winning elections in 1948, 1952 and 1956. He became known simply as le Chef ("the boss").

He was elected to five terms of office in all, the last four of them consecutive. Duplessis remains the last Quebec premier to have won three or more consecutive majority governments. After him, no political party in Quebec elections at the provincial level had managed to win more than two terms of office in a row until the December 2008 victory of Jean Charest's Liberal party, its third consecutive win. 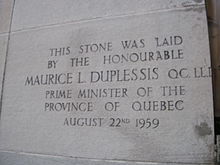 Duplessis died in office in Schefferville, Quebec, on September 7, 1959, after suffering multiple cerebral seizures. After his death, Quebec society was caught in the Quiet Revolution (Révolution tranquille), a swift socio-cultural change away from his conservative policies toward a highly secular, socially liberal welfare state. Many of these major changes occurred when the Liberals regained power in 1960 under Jean Lesage.

Most of his surviving relatives have not handed down the "Duplessis" name to their children, although one of his nieces, Berthe Brunet-Dufresne, has taken it upon herself to rehabilitate her uncle.[citation needed]

Duplessis has not been without his defenders. Conrad Black's 1977 encomium, Duplessis, painted a sympathetic portrait of the man as a transitional figure towards modernism, and the victim of partisan attack and personal malady (Black revealed, for instance, that Duplessis suffered from hypospadias).[3]

Duplessis legacy has remained under attack throughout the decades from all sides. The left Quebec nationalists disliked both his social Conservatism and anti-separatist tendencies, the Liberals disliked his era as a period of successful patronage-oriented traditional conservatism and family values, and the conservatives among the Quebec Anglophones have disliked the privileges given to the church and the lack of freedoms for other churches (Protestant etc.).[citation needed]

The myth of the "black years" of Duplessis and Duplessis's legacy has thus emerged as a result of intellectual opposition by all major Quebec political currents to Catholic church-oriented traditionalist patterns of development, with dominant intellectual streaks combining elements of this dislike. Aside from occasional defenders of his anti-Communist and socially conservative views [4][5] (like Conrad Black), the only defenders of Duplessis regime today come from traditionalist conservatives (paleoconservatives in North American definition) who view his regime as an essential reaffirmation of traditional values, and as assertion by democratic means of the basics of church and family life with low social spending and suppression of labour unions.[citation needed]

The Duplessis regime thus claimed to have prevented, without the massive use of force and police repression that characterized the dictatorial policies of the Franco regime in Spain (a regime Duplessis supported) what his right-wing supporters would have called "subversion"(and what others would have described as the establishment of pluralist secular democracy).[citation needed]

*The Union Nationale was founded as an alliance in 1935 with Duplessis as leader. In 1936 the UN formally became a unitary political party with the Quebec Conservative Party dissolving into it.