Louis-Joseph de Montcalm-Gozon, Marquis de Saint-Veran (February 28, 1712 [O.S. February 17, 1712] – September 14, 1759) was a French soldier best known as the commander of the forces in North America during the Seven Years' War (whose North American theatre is called the French and Indian War in the United States).

Montcalm was born near Nîmes in France to a noble family, and entered military service early in life. He saw service in the War of the Polish Succession and the War of the Austrian Succession, where his distinguished service led to promotion to brigadier general. In 1756 King Louis XV sent him to New France to lead its defence against the British in the Seven Years' War. Montcalm met with notable successes in 1756, 1757 and 1758 but British mobilisation of large numbers of troops against New France led to military setbacks in 1758 and 1759, culminating in Montcalm's death at the Battle of Quebec.

Montcalm is a controversial figure among military historians, some of whom have strongly criticized his decisions at Quebec. But he has also been much memorialized, especially in France, Quebec and parts of New York.

Louis-Joseph was the son of Marie-Thérèse de Pierre and Louis-Daniel de Montcalm, of the House of Montcalm, a family of the 'Noblesse de Robe' of Nîmes, at the family residence, the Chateau de Candiac, near Nîmes in southern France. He joined the French Army in 1727 as an ensign in the Régiment d'Hainault. On the death of his father in 1735, he became the Marquis de Saint-Veran, inheriting the honours, rights, and debts of that position. His finances improved soon after by his marriage to Angelique Louise Talon du Boulay. Despite a marriage arranged for money and influence, they were a devoted couple. They made their home at Candiac and had a large number of children of whom five survived to adulthood.[1]

His father purchased a captaincy for him in 1729 and he served in the War of Polish Succession, seeing action at the 1733 Siege of Kehl and the 1734 Siege of Philippsburg.[2] When the War of the Austrian Succession broke out in 1740 his regiment was stationed in France, so Montcalm, seeking action, took a position as an aide-de-camp to Philippe Charles, Marquis de La Fare. Montcalm and the Chevalier de Lévis (who later served under him in New France) were both in the Siege of Prague. He was promoted to Colonel of the Régiment d'Auxerrois in 1743. He took part in Marshal de Maillebois' Italian campaigns, where he was awarded the Order of Saint Louis in 1744[3] and taken prisoner in the 1746 Battle of Piacenza after receiving five sabre wounds while rallying his men. He was released on parole after several months imprisonment, and promoted to Brigadier for his actions during the 1746 campaign. After prisoner exchanges made possible his return to active service, he joined the Italian campaign again in 1747. He was wounded again by a musket ball in the Battle of Assietta, and assisted in raising the Siege of Ventimiglia in October. When Marshal Belle-Isle retired that winter, his army was left under the command of its brigadiers, including Montcalm. The war came to an end in 1748 with the signing of the Treaty of Aix-la-Chapelle.[4] In 1749 he was awarded a rare opportunity to raise a new regiment in peacetime; the Regiment de Montcalm was a cavalry regiment that Montcalm occasionally inspected.[5] 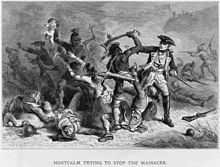 Montcalm was promoted to major general and sent to New France in 1756 to replace the captured Baron Dieskau as commander of French troops in North America during the French and Indian War. His early campaigns against the British were major successes. He expanded the defenses at Fort Carillon on Lake Champlain. He captured and destroyed Fort Oswego on Lake Ontario in 1756. His victory at Fort William Henry in 1757 was a military and personal victory, but the conduct of his Algonquin allies, who massacred British soldiers as they marched out of the fort under negotiated terms of surrender, was a significant political blow. These actions, which were immortalized in James Fenimore Cooper's novel The Last of the Mohicans, disgusted Montcalm, who personally intervened in an attempt to halt the slaughter. 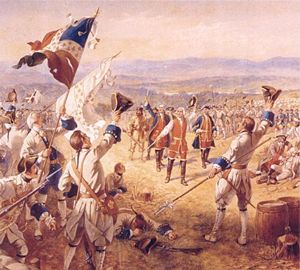 The Victory of Montcalm's Troops at Carillon by Henry Alexander Ogden.

Montcalm's most impressive victory was at the 1758 Battle of Carillon, where he defeated a British army of more than 16,000 with fewer than 4,000 men. It was considered his greatest victory, but the victory was made possible in part due to the incompetence of the British commander, James Abercrombie, who committed numerous errors of tactics and strategy in the battle.[6] Before and throughout the battle, Montcalm displayed a high level of military competence and leadership in all affairs regarding the fort itself and the leadership of his men. Montcalm's time in New France was marked by feuding with its governor, the Marquis de Vaudreuil, and the lack of support in terms of personnel and supplies from France. Montcalm and Vaudreuil on many occasions disagreed on tactics. Montcalm insisted on the European style of warfare, while Vaudreuil favored hit and run strategies that had worked well in the Canadian forest. Disagreements such as these may possibly been the reason for Montcalm's downfall.[7] 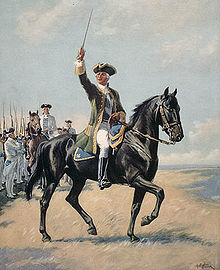 Montcalm leading his troops at Quebec.

Later actions in New France were less successful due in part to the massive resources the British organized against the French. By 1759, French control over the territory had been reduced to the valley of the St. Lawrence River, from Lake Ontario to the Gulf of St. Lawrence. Montcalm believed that the St Lawrence was impassable for a large force, and expected the main attack to come from the south. After receiving word from an intercepted British communication that the British were to attempt a river born attack from the east, Montcalm heavily fortified Quebec City and the river's northern shore to Montmorency Falls early in 1759, and awaited the British. A major expedition led by James Wolfe arrived and began operations against the city in late June. Montcalm held the British off, although the British successfully battered the city with gun batteries placed on the southern shore. Montcalm several times successfully frustrated attempts by Wolfe to land troops where they could form to attack the city, most notably in the Battle of Beauport at the end of July. With winter approaching, Wolfe finally managed to land troops upriver from the city, and Montcalm, rather than retreat to the city's defenses, opted for battle. In the ensuing Battle of the Plains of Abraham on September 13, Montcalm's army was defeated. As they retreated, Montcalm was hit in the abdomen by a British musket ball. Placed in a litter, he was borne back to the field hospital on the banks of the St. Charles river. Told by the surgeons he would not recover, Montcalm replied calmly, "I am glad of it."

According to American historian Francis Parkman:

He (Montcalm) then asked how long he might survive, and was told that he had not many hours remaining. "So much the better," he said; "I am happy that I shall not live to see the surrender of Quebec."

Officers from the garrison came to his bedside to ask his orders and instructions "I will give no more orders," replied the defeated soldier; "I have much business that must be attended to, of greater moment than your ruined garrison and this wretched country. My time is very short; therefore, pray leave me."

The officer withdrew, and none remained in the chamber but his confessor and the Bishop of Quebec. To the latter, he expressed his contempt for his own mutinous and half famished troops, and his admiration for the disciplined valour of his opponents. He died at midnight, and was buried at his own desire in a cavity of the earth formed by the bursting of a bombshell.

His remains, consisting of a skull and a leg bone, were exhumed in the 1800s and were put on display at the convent in a stone crypt alongside a plaque commemorating him. In a ceremony in September 2001, Montcalm's remains were buried in the cemetery of the Quebec General Hospital, where hundreds of casualties from both sides of the battle had been buried 242 years earlier. 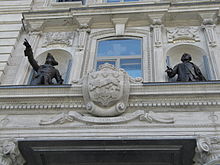 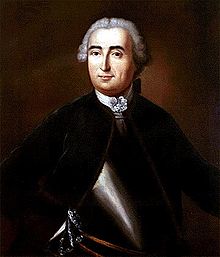 Four vessels of the French Navy have been named in his honour:

Many sites and landmarks were named to honour Montcalm. They include: