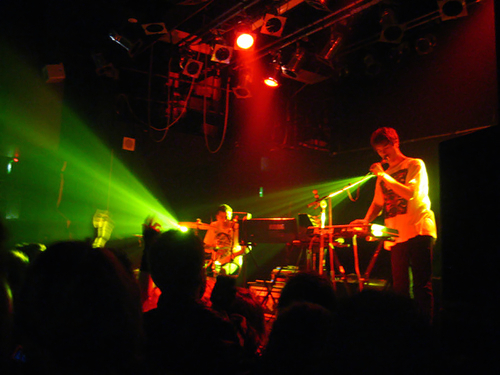 
The Presets are a -based Australian electronic duo, consisting of and . In September 2005, they released their debut album, "Beams", to positive critical response. [http://www.fasterlouder.com.au/reviews/music/3207/ Retrieved 16 June 2007] That same year Julian Hamilton and Kim Moyes also toured with , which is co-fronted by of and Australian dance producer . Johns also played guitar on Presets single "Cookie". Hamilton and Moyes are also members of Sydney instrumental group Prop. [http://tangledmagazine.com/features/apocalypso-kim-from-the-presets-on-touring-curdled-milk-and-billy-corgan Retrieved mid 2007]

Band member Kim Moyes has also had a solo career playing shows at Club 77 in Sydney with the local group Bang Gang, who also put both The Presets and Moyes on their album "Mashed #2". He has helped with the producing of another local band's EP, "The Valentinos" now known as .

The Presets released their first EP "Blow Up", in 2003. It was fairly popular and started out The Presets' career. As a follow up to that EP, they released another EP, named "", in 2004. Around that time, the Presets got small gigs in nightclubs.

Due to great critical response, The Presets released their debut album, "Beams", on the May 20, 2005. To further promote the duo, they decided to release a single named "Are You the One?", which was a success on the dance scene. A remix of the song, mixed by French DJ , was later featured in a BMW 1 Series commercial in . [http://www.areyouthe1.com.au/ Retrieved 20 June 2008]

After that, The Presets toured around the and for three years, promoting the band. While in the UK, the duo released "Down Down Down" and "I Go Hard, I Go Home", in 2006. Both albums were only available in the United Kingdom.

Towards the end of the tour, The Presets released another UK only single titled "Truth & Lies". [http://www.sanity.com.au/product/product.asp?sku=1199153 Retrieved late 2007] It featured two songs, which were successful. Towards the end of 2007, The Presets released "My People" which was successful in Australia and then eventually in the UK and US. Due to the positive response to it, they released their second album, "Apocalypso", which was on the number 1 spot for weeks and months in Australia and was huge. [www.bbc.co.uk/music/release/qwhj/ Retrieved April 2008]

At the end of 2007, the group toured with on their NeverEverLand tour.

In May 2008, The Presets released an EP, single and a all remixed edition for "" which the song of the same name was still becoming used and played on the radio before its release on a Single/EP. As of May, The Presets are still on their UK and United States tour and have released their third single from "Apocalypso", single/EP "".

It has been speculated that "Yippiyo-Ay" may be the next single to be released by The Presets. It has already received airplay on .

Since forming the band in 2003, The Presets have occasionally contributed for Ministry of Sound (MoS) creating remixes for their songs. On the album "Ministry of Sound Presents: Clubbers Guide to 2008", a remix of "My People" named "My People (DIM Remix)" was the second track on the album. On "Ministry Of Sound Presents Session Five", a remix of "This Boy's In Love was included titled "This Boy's in Love (Lifelike Remix)".