Notre Dame College (Bengali: নটর ডেম কলেজ) or NDC is a higher secondary degree college affiliated to the National University. It is situated in Dhaka, Bangladesh and is administrated by the Congregation of Holy Cross, Society of Priests. (In the Indian subcontinent, as in the UK, higher secondary schools, comprising the 11th and 12th year of education, are often referred to as 'colleges'). The college also offers three-year degree program, Bachelor of Arts (B.A. Pass Course) and Bachelor of Social Sciences (B.S.S. Pass Course). In 2009 the institution celebrated its 60th anniversary.

Notre Dame College was established in Arambagh, Dhaka in November, 1949. It was established by the Roman Catholic Priests from the Order of Holy Cross because of the crisis in the education sector of the new born East Pakistan. It was known as the St. Gregory College, an extension of the St. Gregory's School, which was also established by the mission. It was relocated to its current location in Motijheel in 1954 and renamed to Notre Dame College. The new name was a tribute to the University of Notre Dame, the alma mater of many of the faculty members. In French Notre Dame means Our Lady, that stands for Mother Mary.

Students of the college obtained the first place in the combined merit list of the Higher Secondary Certificate Examinations seven times in eight years between 1952 and 1959. The institution, run by Roman Catholics, is open to all students, whether rich or poor, Bengali or tribal, Muslim, Christian, Hindu, or Buddhist. Entrance of Notre Dame College

The college began with classes in arts and commerce subjects. By 1955, it had Bachelor of Arts courses and in 1960, it started Bachelor of Science courses. It gained affiliation with the University of Dhaka in 1955. In 1959 it was declared the best college in East Pakistan in recognition of the high percentage of successful candidates in university examinations.

In the 1960s, it fell short of teachers. The problem led the college authority to borrow volunteers from a British organization called Graduate Volunteers Service Overseas who taught at the college from 1963 to 1970. It was during this period when researcher Father Timm became associated with the college. Like every other college in the country, Notre Dame was becoming more and more trapped in the growing political agitation throughout the country during 1968-69 and its administration was put to a delicate and trying situation especially in the months of the country's war of liberation. The college was involved in relief and rehabilitation work at that time.

The college continued its efforts to provide education to its students in independent Bangladesh. The college has a department of guidance and counseling and a director of studies. It has a literacy program for slum children. It teaches social welfare as a special discipline. It has a student work program, under which about 125 students work in the college to pay for their tuition. It has a small clinic.

The medium of instruction in the college has been Bengali since 1972. Later, English medium was re-opened.

Since 1980s (after the liberation war), Notre Dame College gained reputation of the best institution for higher secondary education in the country. The highest number of perfect GPA holders in national examination (H.S.C.) and the exceptional success of its students in university admission tests bear testimony to this.

Students of the college

Every year Notre Dame College takes around 1250 students through the most competitive college admission process in the country. With the prestige of the highest number of perfect GPA holders in national examination (H.S.C.), Notre Dame College affords to accept students only with exceptional merit and caliber.

Notre Dame Debating Club, moderated by Fr. Adam S. Pereirra CSC, who is known as the father of debating in Bangladesh, celebrated its Golden Jubilee in 2003.

Notre Dame Science Club, moderated by Professor Sushanta Kumar Sarkar, is one of the oldest science clubs in the country. It celebrated its Golden Jubilee in 1999.

The college is managed by the Catholic fathers from the Order of the Holy Cross in Dhaka. Since its establishment, ten priests have served as the principal of the college. 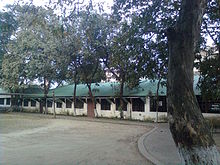