Euglossine bees, also called orchid bees, are the only group of corbiculate bees whose non-parasitic members do not all possess eusocial behavior. Most of the species are solitary, though a few are communal, or exhibit simple forms of eusociality.[1] There are about 200 described species, distributed in five genera: Euglossa, Eulaema, Eufriesea, Exaerete and the monotypic Aglae, all exclusively occurring in South or Central America (though one species, Euglossa viridissima, has become established in the United States). The latter two genera are cleptoparasites in the nests of other orchid bees. All except Eulaema are characterized by brilliant metallic coloration, primarily green, gold, and blue.

Females gather pollen and nectar as food from a variety of plants, and resins, mud and other materials for nest building. Some of the same food plants are also used by the males, which leave the nest upon hatching and do not return.[2] 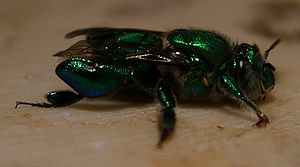 Male orchid bees have uniquely modified legs which are used to collect and store different volatile compounds (often esters) throughout their lives, primarily from orchids in the subtribes Stanhopeinae and Catasetinae, where all species are exclusively pollinated by euglossine males. These orchids do not produce nectar, and hide the pollen on a single anther under an anther cap; they are not visited by females. The whole pollinarium becomes attached to the male as it leaves the flower. Several flowers from other plant families are also visited by the bees: Spathiphyllum and Anthurium (Araceae), Drymonia and Gloxinia (Gesneriaceae), Cyphomandra (Solanaceae), and Dalechampia (Euphorbiaceae) contain one or more species that attract male euglossines.[2]

The chemicals are picked up using special brushes on the forelegs, transferred from there by rubbing the brushes against combs on the middle legs, and finally these combs are pressed into grooves on the dorsal edge of the hind legs, squeezing the chemicals past the waxy hairs which block the opening of the groove, and into a sponge-like cavity inside the hind tibia.

The accumulated "fragrances" are evidently released by the males at their display sites in the forest understory, where matings are known to take place. [3][4] Although the accumulated volatiles have long been believed to serve as a signal to females, female attraction to male odors has never been demonstrated in behavioral experiments. The behavior of volatile collection is essentially unique in the animal kingdom. Single synthetic compounds are commonly used as bait to attract and collect males for study, and include many familiar flavorings and odors considered appealing to humans (e.g., methyl salicylate, eugenol, cineole, benzyl acetate, methyl benzoate, methyl cinnamate), and others which are not (e.g., skatole). [5]

Neotropical orchids themselves often exhibit elaborate adaptations involving highly specific placement of pollen packets (pollinia) on the bodies of the male orchid bees; the specificity of their placement ensures that cross-pollination only occurs between orchids of the same species. Different orchid bee males are attracted to different chemicals, so there is also some specificity regarding which orchid bees visit which types of orchid. The early description of this pollination system was by Charles Darwin, though at the time, he believed the bees were females.[6] Not all orchids utilize euglossines as pollen vectors, of course; among the other types of insects exploited are other types of bees, wasps, flies, ants, and moths.

The male Eufriesea purpurata is highly unusual in actively collecting the insecticide DDT in huge amounts from houses in Brazil, without suffering any harm from it.