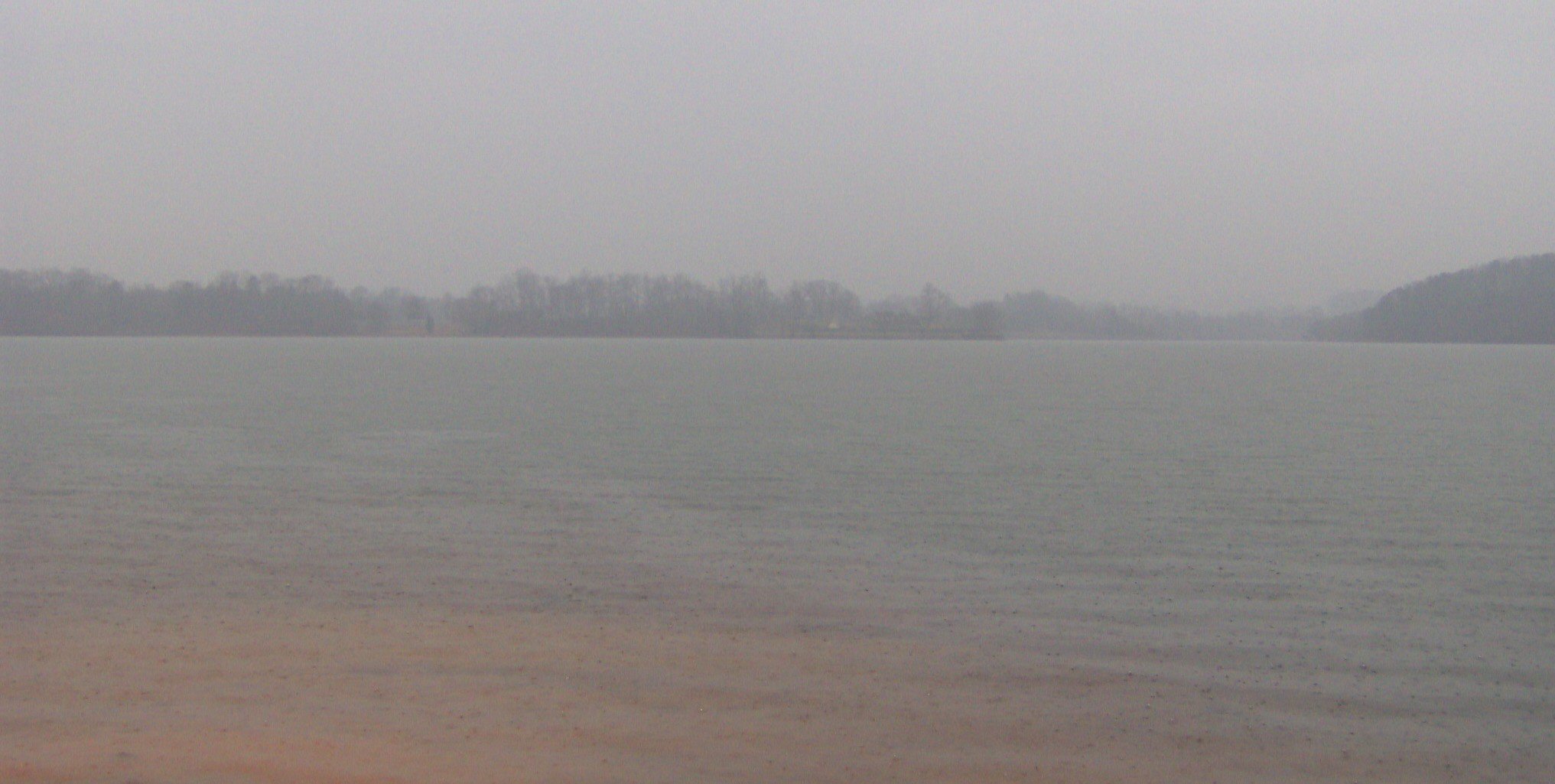 Icehouse Bottom is a prehistoric Native American site in , located in the southeastern United States. Native Americans were using the site as a semi-permanent hunting camp as early as 7500 B.C., making it one of the oldest known habitation areas in the state of Tennessee. Analysis of the site's (1000 B.C. - 1000 A.D.) artifacts shows evidence of an extensive trade network that extended to as far away as Georgia, North Carolina, and Ohio.

The Icehouse Bottom site is now submerged by , an impoundment of the . Excavations were conducted at the site in the 1970s in anticipation of inundation. Tellico Lake is managed by the , and the shoreline immediately above the Icehouse Bottom site is part of the McGhee-Carson Unit of the Tellico Lake Wildlife Management Area, which is managed by the .

The Little Tennessee River enters Monroe County from the east, where it slices a gap between the and the Unicoi Mountains, and winds its way westward for some convert|40|mi|km before emptying into the near Lenoir City. Tellico Lake, created in 1979, covers the lower convert|33|mi|km of the Little Tennessee and the lower convert|22|mi|km of the . Before the creation of the lake, Icehouse Bottom was situated along the south bank of the Little Tennessee, approximately convert|21|mi|km above the mouth of the river and nearly convert|2|mi|km above the river's confluence with the Tellico River. The site was located immediately downstream from the base of a steep hill known as Rockcrusher Bluff. [Jefferson Chapman, "The Icehouse Bottom Site &mdash; 40MR23". Report of Investigations No. 13 (Knoxville, Tenn.: University of Tennessee Department of Anthropology, 1973), 1.]

The McGhee-Carson Unit of the Tellico Lake Wildlife Management Area includes what was once the top of Rockcrusher Bluff, although the bluff became a peninsula when Tellico Lake flooded the area. The entrance to McGhee-Carson is located along Tennessee State Route 360 (Citico Road), a few miles south of the road's junction with . Carson Road traverses the unit, ending abruptly at the lakeshore above what was once Icehouse Bottom.

Although there is little historical information regarding Icehouse Bottom itself, numerous historical areas were located within a two-mile radius. Fort Loudoun, a frontier fort built in 1756, was located approximately one mile to the north, and the , a federal trading outpost built in 1794, was located just over mile to the northeast. The villages of and Toqua were located opposite Rockcrusher Bluff to the south. The Overhill village of Tuskegee, which is best known as the birthplace of the Cherokee scholar , was located almost immediately northwest of the Icehouse Bottom site.

In 1819, the Cherokee sold the Overhill territory south of the Little Tennessee River to the United States government, which included all of what is now Monroe County. Shortly thereafter, an early settler named "Pioneer" John McGhee purchased several thousand acres along the Little Tennessee River, including the Icehouse Bottom site, and established a series of plantations in the area. By the early 1900s, the Icehouse Bottom site was part of a tobacco farm owned by John Carson. [Alberta and Carson Brewer, "Valley So Wild" (Knoxville: East Tennessee Historical Society, 1975), 88-90, 271-278.] Carson's family was in possession of the land when the Tennessee Valley Authority began buying property along the river for the creation of the Tellico Reservoir. [Chapman, "The Icehouse Bottom Site 40MR23", 1.]

Although it's unclear how Icehouse Bottom got its name, historian Carson Brewer wrote of a McGhee family story that recalled an "ice-house" located on their lands in the Little Tennessee Valley in the 1800s. According to Brewer, a hole approximately convert|30|ft|m in circumference would be dug in winter, and ice would be cut from the river or a frozen stream, placed in the hole, and covered with sand. This preserved the ice through the following summer. [Brewer and Brewer, "Valley So Wild", 91.]

In 1967, the Tennessee Valley Authority began construction on Tellico Dam at the mouth of the Little Tennessee, and purchased some convert|22000|acre|km2 along the river's shoreline. That same year, the University of Tennessee Department of Anthropology, under contract with the , began a survey of the valley to determine its archaeological resources and to select sites for pre-inundation excavation. Although project members initially had just two years before the dam became operational, litigation over environmental concerns pushed the dam's operational date to 1979, allowing for much more extensive archaeological work at the Little Tennessee Valley sites. [Richard Polhemus, "The Toqua Site 40MR6" Vol. 1 (Knoxville, Tenn.: Tennessee Valley Authority, 1987), 1-2.] Excavations were carried out at Icehouse Bottom in 1969, 1970, 1971, and 1977. [Chapman, "The Icehouse Bottom Site &mdash; 40MR23", 4-11.] [Patricia Cridlebaugh, "The Icehouse Bottom Site (40MR23): 1977 Excavations". Report of Investigations No. 34 (Knoxville, Tenn.: Tennessee Valley Authority, 1981).] The site's situation along the river's flood plain meant that each heavy rain added a fresh layer to the site, making it easy to stratify. [Brian Fagan, "Ancient North America" (Thames and Hudson Ltd., 2005).]

The 1969-1971 excavations uncovered the charred remains of numerous clay hearths situated along the river at Icehouse Bottom. has established the date of the earliest of these hearths at around 7500 B.C., during the Early Archaic period (8000-6000 B.C.). Some of these hearths still displayed impressions made by netting or basketry when the clay was still moist. [Jefferson Chapman, "Tellico Archaeology: 12,000 Years of Native American History" (Knoxville, Tenn.: Tennessee Valley Authority, 1985), 41.] Other Archaic-period artifacts uncovered at Icehouse Bottom include a unique type of Early Archaic bifurcate projectile point and Late Archaic (3000-1000 B.C.) netsinkers. [Chapman, "The Icehouse Bottom Site &mdash; 40MR23", 21.]

Throughout the Archaic period, Icehouse Bottom was likely used as a "base camp" and occupied on a seasonal or other semi-permanent basis. The camp consisted of several dozen dwellings spread for several hundred feet along the river terrace. Rockcrusher Bluff contains various outcroppings of , which would have been sought for use in making tools and weapons. [Chapman, "Tellico Archaeology: 12,000 Years of Native American History", 40-41.] The diet of Icehouse Bottom's early inhabitants consisted primarily of white-tailed deer, black bear, acorns, and hickory nuts. Smaller animals, including squirrel and rabbit, were also hunted. [Fagan, "Ancient North America".]

The Woodland-period material recovered from Icehouse Bottom is notable primarily for the presence of that dates to as early as 100 A.D. as well as non-local pottery sherds. Pottery fragments uncovered at Icehouse Bottom show that the site's inhabitants were interacting with people of other Middle Woodland sites around the region, including the Hopewell people of Ohio. [Chapman, "Tellico Archaeology: 12,000 Years of Native American History", 58-59, 125.] [James Stoltman, " [http://mcclungmuseum.utk.edu/research/renotes/rn-17txt.htm Icehouse Bottom and the Hopewell Connection] ." Frank H. McClung Museum "Research Notes" 17 (February 1999). Retrieved: 29 January 2008.] Woodland period human burials and cremations are not uncommon in the Icehouse Bottom vicinity. [Chapman, "Tellico Archaeology: 12,000 Years of Native American History", 47.]

Icehouse Bottom may have been a manufacturing center of sorts during the Middle Woodland period. Sherds confirm a trade network that included not only the Hopewell centers but the Sylva and Garden Creek areas of North Carolina, the McMahan Indian Mounds a few miles to the east in what is now Sevierville, and sites as far away as Georgia. Several sherds uncovered at the Hopewell site in Ohio were probably manufactured at Icehouse Bottom. Icehouse Bottom may have also served as a regional distribution center for . The site probably declined after the Middle Woodland period, although a few fragments indicative of the early Mississippian period have been found. [Chapman, "Tellico Archaeology: 12,000 Years of Native American History", 70-73.] [Stoltman, " [http://mcclungmuseum.utk.edu/research/renotes/rn-17txt.htm Icehouse Bottom and the Hopewell Connection] ," (February 1999).]