Moctezuma was the son of emperor Huitzilihuitl and queen Miahuaxihuitl. He was a brother of Chimalpopoca, Tlacaelel I and Huehue Zaca. Moctezuma executed Zaca for singing and beating his drum loudly.

According to legend, Miahuaxihuitl miraculously became pregnant with Moctezuma after swallowing a jewel. This may be the origin of the name Ilhuicamina. Moctezuma later married Chichimecacihuatzin I, his mother's niece.

Tlacaelel held the position of cihuacoatl - "First councillor" during Moctezuma's reign and some sources ascribe a lot of the success of Moctezuma to Tlacaelel, but this may be a postconquest invention (Gillespie 1989:132).

Moctezuma took power in 1441, after the death of his half-uncle Itzcoatl. As tlatoani, Moctezuma solidified the alliance with two neighboring peoples, Tlacopan (a small city-state) and Texcoco. In this skillfully crafted Triple Alliance, 4/5ths of a newly conquered territory would be divided between Texcoco and the Aztecs, with the remaining 1/5 given to Tlacopan.

Among the Aztecs' greatest achievements, Moctezuma and Nezahualcoyotl of Texcoco organized the construction and completion of a double aqueduct pipe system, supplying the city of Tenochtitlan with fresh water.

Moctezuma extended the boundaries of the Aztec empire beyond the Valley of México to the Gulf Coast, subjugating the Huastec people and Totonac peoples and thereby gaining access to exotic goods such as cocoa, rubber, cotton, fruits, feathers, and seashells.

About 1458, Moctezuma led an expedition into Mixtec territory against the city-state of Coixtlahuaca, the pretext being the mistreatment of Aztec merchants. Despite the support of contingents of Tlaxcala and Huexotzingo warriors, traditional enemies of the Aztecs, the Mixtecs were defeated. While most of the defeated chieftains were allowed to retain their positions, the Mixtec ruler Atonal was ritually strangled and his family was taken as slaves. The Codex Mendoza records that the tribute owed by Coixtlahuaca consisted of 2000 blankets (of 5 types), 2 military outfits with headresses and shields, green gemstone beads, 800 bunches of green feathers, 40 bags of cochineal dye, and 20 bowls of gold dust.[1] 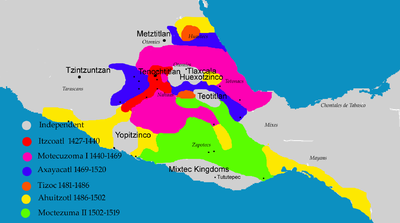 Map showing the expansion of the Aztec empire showing the areas conquered by the Aztec rulers. The conquests of Moctezuma is marked by the colour pink.[2]

Ancestors of Moctezuma I