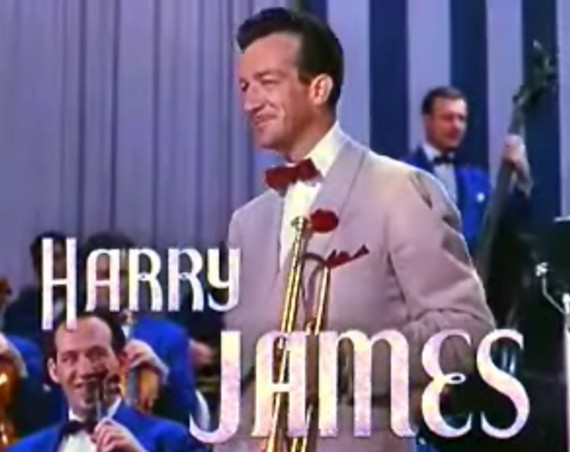 He was born Harry Haag James in Albany, Georgia, the son of a bandleader of a traveling . By the age of 10 he was taking trumpet lessons from his father, who placed him on a strict daily practice schedule. Each day, James was given one page to learn from the Arban's book and was not allowed to pursue any other pastime until he had learned that particular page.

In 1931 the family settled in Beaumont, where James began playing with local bands.

In February 1939 James debuted his own in , . He toured with the band into the 1980s. His was the first "name band" to employ vocalist , in 1939. He wanted to change Sinatra's name to 'Frankie Satin' but Sinatra refused. His later band included .

He played trumpet in the 1950 "Young Man with a Horn", dubbing . James' recording of "" appears in the motion picture "My Dog Skip" (2000). His music is also featured in the film "". James recorded many popular records and appeared in many Hollywood movies.

James was second only to as the most successful recording artist of 1942.

James was married three times. In May 1935, he wed singer Louise Tobin, with whom he had two children and they remained married until 1943.

James owned several racehorses that won races such as the (1951) and the (1954). He was also a founding investor in the . His knowledge of horse racing was demonstrated during a 1959 appearance on "" entitled "Lucy Wins A Racehorse."

In 1983, James was diagnosed with lymphatic cancer, but he continued to work, playing his last professional job on , in Los Angeles, , just nine days before his death in Las Vegas, . [ [http://www.findagrave.com/cgi-bin/fg.cgi?page=gr&GRid=6044 Findagrave.com] ] gave the at the Bunkers Eden Vale Memorial Park in Las Vegas, . [ [http://www.hnwhitekings.com/Harry.html hnwhitekings.com] ]