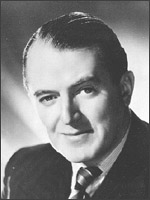 
website =
footnotes = :"This article is about Jack Warner, the English film and television actor. For other people named Jack Warner, see ".

He was born in , his real name being Horace John Waters.

It was in 1949 that Warner first played the role with which he would forever after be associated, that of PC George Dixon in the film, "".

He was appointed an Officer of the Order of the British Empire (OBE) in 1965.

The characterisation by Warner of Sergeant George Dixon, was held in such high regard that officers from bore the coffin at his funeral in 1981.

Warner is buried in East London Cemetery and Crematorium.

Jack Warner was very well known and appreciated in the early war years (1940), starring in a BBC radio show named, 'Garrison Theatre', he invariably opened with, 'A Monologue Entitled...'.