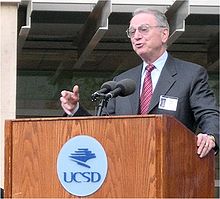 Dr. Irwin Jacobs speaking during dedication of the Computer Science and Engineering Building and "bear" sculpture at UCSD in 2005.

Irwin Mark Jacobs (born October 18, 1933 in New Bedford, Massachusetts), is an electrical engineer and the co-founder and former chairman of Qualcomm, and chair of the board of trustees of the Salk Institute. In 2010, Jacobs was listed as number 828 on Forbes's annual list of the World's Top Billionaires.[1]

Jacobs earned his B.S. degree in electrical engineering from Cornell University in 1956, and his S.M. and Sc.D. degrees in EECS (Electrical Engineering and Computer Science) from the Massachusetts Institute of Technology (MIT) in 1957 and 1959, respectively. Additionally, he is a brother of Sigma Alpha Mu Fraternity.[2]

Jacobs was Assistant and Associate Professor of Electrical Engineering at MIT from 1959 to 1966 and Professor of Computer Science and Engineering at University of California, San Diego from 1966 to 1972. He co-authored a textbook entitled Principles of Communication Engineering in 1965, which is still in use today. UCSD's Jacobs School of Engineering is named for him and his wife.[3]

In 1985 Jacobs went on to co-found Qualcomm. QUALCOMM's OmniTRACS system is one of the world's most "technologically advanced two-way mobile satellite communications and tracking systems. He pioneered these systems which use the communication bandwidth more efficiently than the older fixed time-sliced TDMA technology. Its Code Division Multiple Access (CDMA) has been adopted as one of two digital standards for the next generation of cellular telephones in North America. Dr. Jacobs announced on March 3, 2009 that he had stepped down as chairman of Qualcomm and that Paul E. Jacobs, his son, had been named to succeed him.[3]

Irwin Jacobs is a member of the National Academy of Engineering and a Fellow of the IEEE.[3] He is a chairman on the Salk Institute for Biological Studies, and is on the international advisory board for the Israel Institute of Technology. Additionally, he serves on the advisory board for the School of Economics and Management at Tsing Hua University in Beijing. He is also active on the Pacific Council on International Policy in Los Angeles.[2]

For his development of CDMA, Dr. Jacobs was awarded the National Medal of Technology and Innovation in 1994. That same year, he was awarded the 1994 Cornell University Entrepreneur of the Year Award. In 1995, Jacobs won the 1995 IEEE Alexander Graham Bell Medal For outstanding contributions to telecommunications, including leadership, theory, practice and product development.[3]

He was named a Marconi Prize recipient and Marconi Fellow in 2011. Jacobs was awarded the Bower Award for Business Leadership in 2001. [3][4]

Jacobs and his wife Joan Jacobs are contributors to public arts and education in San Diego. For this, Jacobs was awarded the Woodrow Wilson Award for Corporate Citizenship in 2004.

He and his wife reside in California, and have four sons. His outside interests include the arts, reading, jogging, and family outings. Their son Paul E. Jacobs is CEO of Qualcomm. Jeff Jacobs is the Chief Marketing Officer of Qualcomm. Hal Jacobs the second oldest, played on the 1985 USA Maccabi volleyball team, and is a Co-Producer of the hit musical Jersey Boys. Their eldest son Gary Jacobs is the head of the board of the Gary and Jerri-Ann Jacobs High Tech High Charter School. Jacobs's grandson, Adam Jacobs, is a former catcher of the Cornell University baseball team.[3]

As the co-founder and chairman of Qualcomm, Irwin M. Jacobs has had the opportunity to contribute hundreds of millions of dollars to the field of education through generous donations and grants to several schools and organizations. His donations have gone mostly towards fellowships and scholarships for deserving students in the fields of engineering and computer science, as well as the arts, and are focused in the San Diego area.[8][9] The San Diego Union Tribune in 2011 dubbed him the "Philanthropist in Chief".[10]

As of September of 2009, Jacobs had donated a total of $31 million to his post graduate degrees school the Massachusetts Institute of Technology. He had donated $15 million and another $110 million to the University of California at San Diego where he was a professor of computer science and engineering for several years. Additionally he has donated $62 million total to the American Society for Technion, his alma mater Cornell University, KPBS Radio and Television, and San Diego Natural History Museum.[8] His KPBS donation was in the sum of $1 million, and the multi-year gift is designed to strengthen the station's local journalism and news collaboration with NPR. The Jacobs have donated funds to build studios for KPBS and have supported the station for decades.[11] In 2010 he funded an engineering study on how to fulfill a long-planned proposal to remove automobiles from the Plaza de Panama in San Diego's Balboa Park and agreed to chair a committee to study the proposal and develop private funding for it.[12]

Irwin Jacobs has pledged $120 million for the San Diego Symphony, a similar amount for the Jacobs School of Engineering at the University of California San Diego, $75 million for UCSD's future specialty hospital and $20 million to replace the central library in downtown San Diego. Also in 2005 the Joan and Irwin Jacobs Center for La Jolla Playhouse was named after Jacobs and his wife in honor of their philanthropic contributions towards the institution's development.[13][9]

In August of 2010, Irwin and Joan Jacobs joined the Giving Pledge, pledging to give away most of their fortune to philanthropy. The Giving Pledge consists of around 40 America billionaires who have agreed to pledge 50 percent or more of their wealth to philanthropic causes. As of 2010, 50 percent of Jacob's wealth would equal $600 million. As part of the pledge, the Jacobses will choose which charities they would like to donate at least 50 percent of their estate to.[13]