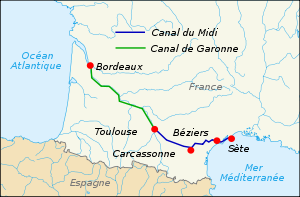 The Canal du Midi (Occitan: Canal de las Doas Mars, meaning canal of the two seas) is a 240 km (150 mi) long canal in Southern France (French: le Midi). The canal connects the Garonne River to the Étang de Thau on the Mediterranean and along with the Canal de Garonne forms the Canal des Deux Mers joining the Atlantic to the Mediterranean. The canal runs from the city of Toulouse down to the Étang de Thau. The Canal du Midi was built by Pierre-Paul Riquet.

It was inscribed as a UNESCO World Heritage Site in 1996.[1]

The Canal du Midi was built to serve as a shortcut between the Atlantic and the Mediterranean, avoiding the long sea voyage around hostile Spain, Barbary pirates, and a trip that in the 17th century took a full month to complete. Its strategic value was obvious and it had been discussed for centuries, in particular when King Francis I brought Leonardo da Vinci to France in 1516 and commissioned a survey of a route from the Garonne at Toulouse to the Aude at Carcassonne. The major problem was how to supply the summit sections with enough water.[2][3][4]

In 1662, Pierre-Paul Riquet, a rich tax-farmer in the Languedoc region, who knew the region intimately, believed he could solve the problem, but he first had to persuade Jean-Baptiste Colbert, the finance minister of Louis XIV, which he did through his friendship with the Archbishop of Toulouse. A Royal Commission was appointed and in 1665 recommended the project which was finally ordered by Louis XIV in 1666 with the possible expenditure of 3,360,000 livres. The specifications for the work were drawn up by the head of this commission and France's leading military engineer in that period, the Chevalier de Clerville, who remained a loyal ally of Riquet and partisan of the Canal du Midi until his death.[2][3][4] To help in the design, Riquet is said to have constructed a miniature canal in the grounds of his house, Bonrepos, complete with locks, weirs, feeder channels and even a tunnel.[2]

At the age of 63, Riquet started his great enterprise, sending his personal engineer, François Andreossy, and a local water expert, Pierre Roux, to the Montagne Noire to work on the water supply. Some of Clerville's men with experience in military engineering came, too, to build a huge dam, the Bassin de St. Ferréol, on the Laudot river. The Laudot is a tributary of the River Tarn in the Montagne Noire some 20 km (12 mi) from the summit of the proposed canal at Seuil de Naurouze. This massive dam, 700 metres (2,300 ft) long, 30 metres (98 ft) above the riverbed and 120 metres (390 ft) thick at its base was the largest work of civil engineering in Europe and only the second major dam to be built in Europe, after one in Alicante in Spain. It was connected to the Canal du Midi by a contoured channel over 25 km long, 3.7 m (12 ft) wide with a base width of 1.5 m (4.9 ft). It was eventually equipped with 14 locks in order to bring building materials for the canal down from the mountains and to create a new port for the mountain town of Revel. This supply system successfully fed the canal with water where it crossed the continental divide, replacing water that drained toward the two seas. The system was a masterpiece of both hydraulic and structural engineering, and served as an early ratification of Riquet's vision. It was also a major part of a massive enterprise. At its peak 12,000 labourers worked on the project, including over a thousand women, many of whom came specifically to work on the water system.[2][3][4]

The women labourers were surprisingly important to the canal's engineering. Many came from former Roman bath colonies in the Pyrenees, where elements of classical hydraulics had been maintained as a living tradition. They were hired at first to haul dirt to the dam at St. Ferréol, but their supervisors, who were struggling to design the channels from the dam to the canal, recognized their expertise. Engineering in this period was mainly focused on fortress construction, and hydraulics was concerned mostly with mining and problems of drainage. Building a navigational canal across the continent was well beyond the formal knowledge of the military engineers expected to supervise it, but the peasant women who were carriers of classical hydraulic methods added to the repertoire of available techniques. They not only perfected the water supply system for the canal but also threaded the waterway through the mountains near Béziers, using few locks, and built the eight-lock staircase at Fonserannes.[3]

The canal was built on a grand scale, with oval shaped locks 30.5 m (100 ft) long, 6 m (20 ft) wide at the gates and 11 m (36 ft) wide in the middle. This design was intended to resist the collapse of the walls that happened early in the project. The oval locks used the strength of the arch against the inward pressure of the surrounding soil that had destabilized the early locks with straight walls.[2] Such arches had been used by the Romans for retaining walls in Gaul, so this technique was not new, but its application to locks was revolutionary and was imitated in early American canals.[3][4]

Many of the structures were designed with neoclassical elements to further and to echo the king's ambitions to make France a New Rome. The Canal du Midi as a grand piece of infrastructural engineering in itself was promoted as worthy of Rome and the political dreams behind it were clarified with plaques in Latin, and walls built with Roman features.[3]

The Canal du Midi was opened officially as the Canal Royal de Languedoc on May 15, 1681.[2] It was also referred to as the Canal des Deux Mers (Canal of Two Seas). It eventually cost over 15 million livres, of which nearly two million came from Riquet himself, leaving him with huge debts, and he died in 1680, just months before the Canal was opened. His sons inherited the canal, but the family's investments were not recovered and debts not fully paid until over 100 years later. The canal was well managed and run as a paternalistic enterprise until the revolution.

Characteristics of the Canal

The Canal has 91 locks which serve to ascend and descend a total of 190 metres (620 ft). It has 328 structures, including bridges, dams and a tunnel.

There are now over 40 aqueducts, but when created by Riquet, there were only three, the Répudre Aqueduct, Aiguille Aqueduct and Jouarres Aqueduct. To cross the other streams, the streams were dammed below the canal and the boats crossed on the rivers themselves. From 1683 to 1693, Vauban improved the canal adding drainage ditches and over 40 aqueducts. Among the most important were the Orbiel Aqueduct and Cesse Aqueducts. The Orb Aqueduct was finished in 1858 and finally, the Herbettes Aqueduct in 1983.[5]

At the town of Béziers there was a staircase of eight locks at Fonsérannes to bring it to the river Orb. The locks had to be cut from solid rock, and descended a hillside whose gradient varied. All the locks had to contain the same volume of water, but could not have precisely the same shape. Nonetheless, they were built successfully without need of repair. Surprisingly, this amazing piece of engineering was subcontracted out to two illiterate brothers, the Medhailes, and was built by a workforce composed mainly of women.[3]

Because of flooding problems, the Canal du Midi was equipped with aqueduct bridges. The first was over the Le Répudre River, but Vauban also designed subsequent ones. Finally, an aqueduct bridge was built over the Orb Aqueduct, bypassing the bottom two locks at Fonserannes. In 1982/3, a new Fonserannes water slope was built for barges alongside the lock staircase, too, though it is now out of service.

The design of the Canal included the first canal passage ever built through a tunnel (the Malpas Tunnel). The Canal du Midi passes through a 173-metre (568 ft) tunnel through a hill at Enserune.

The construction of the Canal du Midi was considered by people in the 17th century as the biggest project of the day. Even today, it is seen as a marvelous engineering accomplishment and is the most popular pleasure waterway in Europe.

Initially the canal appears to have been mainly used by small sailing barges with easily lowered masts, bow-hauled by gangs of men. By the middle of the 18th century, horse towing had largely taken over and steam tugs came in 1834 to cross the Étang. By 1838 273 vessels were regularly working the canal and passenger and packet boats for mail continued a brisk trade until the coming of the railways in 1857.[6] Commercial traffic continued until 1980 when it began to decline rapidly, ultimately ceasing altogether during the drought closure of 1989.

Now the Canal has become a tourist attraction and place for leisure activities, with many people rowing, canoeing, fishing or even cruising on luxury hotel barges such as the Anjodi. The canal's beauty is enhanced by rows of stately Plane trees that line each side. The 42,000 trees, which date from the 1830s, were planted to stabilize the banks. In 2006 a wilt infection was discovered that is killing the trees. About 2,500 had been destroyed by mid-2011, at which time it was projected that all would need to be destroyed and replaced in 20 years.[7]