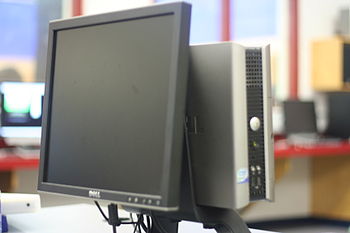 Dell OptiPlex 755 (Ultra Small Form Factor), mounted on the back of a monitor

Dell, Inc. targets its OptiPlex line of desktop computers for sale into the corporate, government and education markets. These systems typically contain Intel CPUs, beginning with the Pentium and currently[update] with the Core i7 (as of late 2008), although Dell sells some models with AMD CPUs as well. They contain business-oriented components (such as Gigabit Ethernet, which Dell makes available only on its Precision, XPS, Latitude, OptiPlex and PowerEdge systems) and software. (Compare Dell's Dimension counterparts.)

Older Optiplex models (mostly produced in 2003 and 2004), notably the GX270, suffered from frequent failures due to faulty capacitors supplied by Nichicon. These capacitors would bulge and leak, resulting in product failure after only a few years of use. As of June 2010, there is still ongoing litigation regarding this problem, alleging that Dell knew that the computers were likely to fail, and continued to ship them.[1]

OptiPlex is a portmanteau of "opti" (meaning optimal) and "plex" (meaning parts or units.)[2]

The newest OptiPlex models break from Dell's proprietary form factors and follow, for the most part, the BTX standard.

The OptiPlex series comes in various sizes which have evolved as the style of chassis has changed.

In the classic beige chassis:

In the recent[update] midnight-gray chassis (with the flip-up door) (Transformer cases):

The Optiplex 960 introduces a new style of cases, made to be eco-friendly with recyclable plastics. They are named after various rock bands (Bon Jovi, Motley Crew, Mr. Big).