Under the Big Black Sun

Under the Big Black Sun 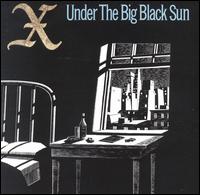 "Under the Big Black Sun" is the third album by the American X, and their major-label debut. It was released on in 1982, and reissued on in 2001 with bonus tracks.

The album was listed by band member as her favorite X album. Much of the material, including the album's title track, written after the tragic, untimely death of Cervenka's sister Mireille (Mary) in an automobile accident in April 1980. The stark black & white cover art was also a reflection of the mood of the band, particularly Ms. Cervenka, during this difficult and painful time.

The overall sound of the record still contains the hard-edged, fast-paced punk rock that became the band's trademark, but a more country and blues sound had also emerged from the mournful period. The album even contains a rare X slow song, "Come Back to Me," done in a 50s "doo-wop" style that is, once again, a tribute to Mary Cervenka. A fast-paced version of 's song "Dancing with Tears in My Eyes" with a country-swing style that the band had never before or since emulated, was also a tribute to Mary.

All tracks written by and except as indicated.