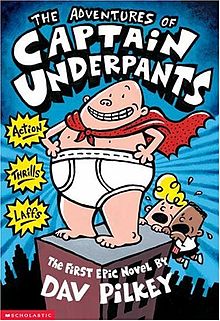 The Captain Underpants books were reported by the American Library Association to be the sixth most frequently challenged books in the year 2002.[1] Dav Pilkey also mentioned this in his website. According to the American Library Association, Pilkey's Captain Underpants series was banned in some schools for insensitivity and being unsuited to age group, as well as encouraging children to disobey authority.[citation needed]

In 2006, Captain Underpants Halloween costumes created controversy at Long Island (NY) high school. Three female students dressed up as Captain Underpants and the principal placed a costume ban for all students. The three girls put on beige leotards and nude stockings under white briefs and red capes. According to Principal Restivo, "the appearance was that they were naked."[2]

Although the first few books came out on a regular basis, the 9th book, Captain Underpants and the Terrifying Return of Tippy Tinkletrousers (advertised in a teaser at the end of the 8th book), has not yet been released in bookstores. While some of his fans assumed[who?] that Dav Pilkey had writer's block, he was actually on hiatus caring for his terminally-ill father.[3]

Dav Pilkey won the Caldecott Honor Award for The Paperboy, even though he is mostly known for the Captain Underpants' series. He is also recognized for his illustrations and paintings. His diverse talents are apparent in the wide range of more than 40 books he has published. In 2009, he signed a deal with Scholastic for four new books, the first of which was The Adventures of Ook and Gluk: Kung-Fu Cavemen from the Future, released on August 10, 2010. The second was Super Diaper Baby 2: The Invasion of the Potty Snatchers released on June 28, 2011.[4]The Third Book F.A.R.T.S. The Major Motion Picture is scheduled to be released in the fall of 2012.

In October 2011, it was reported that DreamWorks Animation has acquired rights to make a feature film based on the Captain Underpants series.[5]

Distribution outside the USA