Achalasia is characterized by difficulty swallowing, regurgitation, and sometimes chest pain. Diagnosis is reached with esophageal manometry and barium swallow radiographic studies. Various treatments are available, although none cure the condition. Certain medications or Botox may be used in some cases, but more permanent relief is brought by esophageal dilatation and surgical cleaving of the muscle (Heller myotomy).

The most common form is primary achalasia, which has no known underlying cause. It is due to the failure of distal esophageal inhibitory neurons. However, a small proportion occurs secondary to other conditions, such as esophageal cancer or Chagas disease (an infectious disease common in South America).[4] Achalasia affects about one person in 100,000 per year.[4][5]

The main symptoms of achalasia are dysphagia (difficulty in swallowing), regurgitation of undigested food, chest pain behind the sternum, and weight loss.[6] Dysphagia tends to become progressively worse over time and to involve both fluids and solids. Some people may also experience coughing when lying in a horizontal position. The chest pain experienced, also known as cardio spasm and non-cardiac chest pain can often be mistaken for a heart attack. It can be extremely painful in some sufferers. Food and liquid, including saliva, are retained in the esophagus and may be inhaled into the lungs (aspiration).

The cause of most cases of achalasia is unknown.[7] 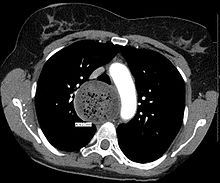 An axial CT image showing marked dilatation of the esophagus in a person with achalasia.

Due to the similarity of symptoms, achalasia can be mistaken for more common disorders such as gastroesophageal reflux disease (GERD), hiatus hernia, and even psychosomatic disorders. Specific tests for achalasia are barium swallow and esophageal manometry. In addition, endoscopy of the esophagus, stomach and duodenum (esophagogastroduodenoscopy or EGD), with or without endoscopic ultrasound, is typically performed to rule out the possibility of cancer.[4] The internal tissue of the esophagus generally appears normal in endoscopy, although a "pop" may be observed as the scope is passed through the non-relaxing lower esophageal sphincter with some difficulty, and food debris may be found above the LES.

The patient swallows a barium solution, with continuous fluoroscopy (X-ray recording) to observe the flow of the fluid through the esophagus. Normal peristaltic movement of the esophagus is not seen. There is acute tapering at the lower esophageal sphincter and narrowing at the gastro-esophageal junction, producing a "bird's beak" or "rat's tail" appearance. The esophagus above the narrowing is often dilated (enlarged) to varying degrees as the esophagus is gradually stretched over time.[4] An air-fluid margin is often seen over the barium column due to the lack of peristalsis. A five-minutes timed barium swallow can provide a useful benchmark to measure the effectiveness of treatment. 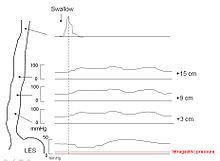 Schematic of manometry in achalasia showing aperistaltic contractions, increased intraesophageal pressure and failure of relaxation of the lower esophageal sphincter.

Because of its sensitivity, manometry (esophageal motility study) is considered the key test for establishing the diagnosis. A thin tube is inserted through the nose, and the patient is instructed to swallow several times. The probe measures muscle contractions in different parts of the esophagus during the act of swallowing. Manometry reveals failure of the LES to relax with swallowing and lack of functional peristalsis in the smooth muscle esophagus.[4]

Biopsy, the removal of a tissue sample during endoscopy, is not typically necessary in achalasia, but if performed shows hypertrophied musculature and absence of certain nerve cells of the myenteric plexus, a network of nerve fibers that controls esophageal peristalsis.[8]

Sublingual nifedipine significantly improves outcomes in 75% of people with mild or moderate disease. Surgical myotomy provides greater benefit than either botulinum toxin or dilation in those who fail medical management.[9]

Both before and after treatment, achalasia patients may need to eat slowly, chew very well, drink plenty of water with meals, and avoid eating near bedtime. Raising the head of the bed or sleeping with a wedge pillow promotes emptying of the esophagus by gravity. After surgery or pneumatic dilatation, proton pump inhibitors can help prevent reflux damage by inhibiting gastric acid secretion; and foods that can aggravate reflux, including ketchup, citrus, chocolate, alcohol, and caffeine, may need to be avoided.

Drugs that reduce LES pressure are useful. These include calcium channel blockers such as nifedipine,[10] and nitrates such as isosorbide dinitrate and nitroglycerin. However, many patients experience unpleasant side effects such as headache and swollen feet, and these drugs often stop helping after several months.

Botulinum toxin (Botox) may be injected into the lower esophageal sphincter to paralyze the muscles holding it shut. As in the case of cosmetic Botox, the effect is only temporary and lasts about 6 months. Botox injections cause scarring in the sphincter which may increase the difficulty of later Heller myotomy. This therapy is only recommended for patients who cannot risk surgery, such as elderly persons in poor health.[4]

In balloon (pneumatic) dilation or dilatation, the muscle fibers are stretched and slightly torn by forceful inflation of a balloon placed inside the lower esophageal sphincter. Gastroenterologists who specialize in achalasia have performed many of these forceful balloon dilatations achieve better results and fewer perforations. There is always a small risk of a perforation which requires immediate surgical repair. Pneumatic dilatation causes some scarring which may increase the difficulty of Heller myotomy if the surgery is needed later. Gastroesophageal reflux (GERD) occurs after pneumatic dilatation in some patients. Pneumatic dilatation is most effective on the long term in patients over the age of 40; the benefits tend to be shorter-lived in younger patients. It may need to be repeated with larger balloons for maximum effectiveness.[5]

Heller myotomy helps 90% of achalasia patients. It can usually be performed by a keyhole approach, or laparoscopically.[11] The myotomy is a lengthwise cut along the esophagus, starting above the LES and extending down onto the stomach a little way. The esophagus is made of several layers, and the myotomy only cuts through the outside muscle layers which are squeezing it shut, leaving the inner muscosal layer intact. A partial fundoplication or "wrap" is generally added in order to prevent excessive reflux, which can cause serious damage to the esophagus over time. After surgery, patients should keep to a soft diet for several weeks to a month, avoiding foods that can aggravate reflux.

Most recommended fundoplication along with Heller's myotomy is Dor's fundoplication. It consists of 180 to 200 degree anterior wrap around the esophagus. It provides excellent result as compared to Nissen's fundoplication which is associated with higher incidence of the post surgery dysphagia.[citation needed]

Follow-up monitoring: Even after successful treatment of achalasia, swallowing may still deteriorate over time. The esophagus should be checked every year or two with a timed barium swallow because some may need pneumatic dilatations, a repeat myotomy, or even esophagectomy after many years. In addition, some physicians recommend pH testing and endoscopy to check for reflux damage, which may lead to a premalignant condition known as Barrett's esophagus or a stricture if untreated.