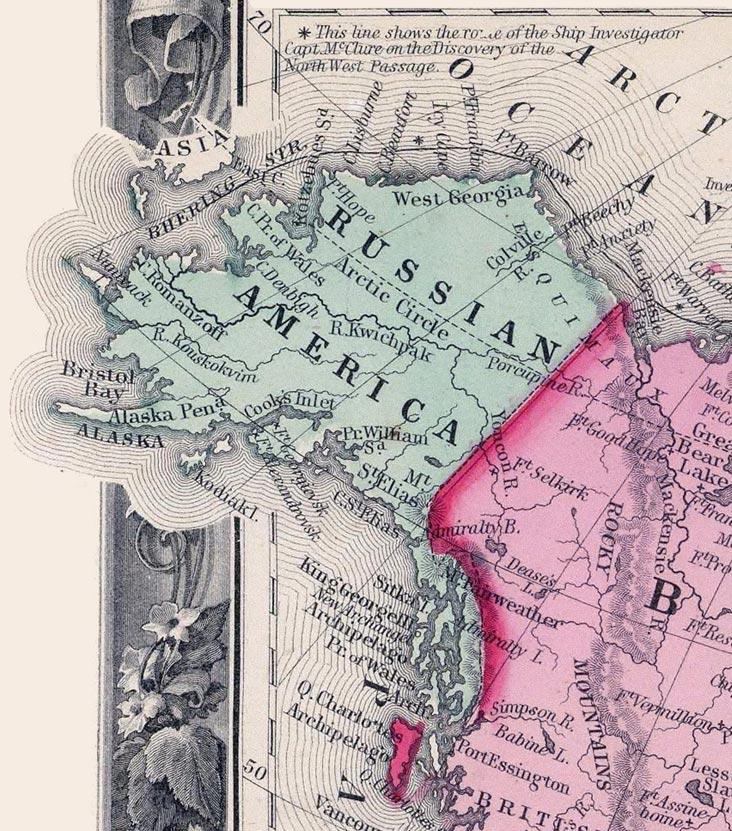 Russian Alaska was the period between 1733 and 1867 in which Russia controlled the territory that today is the of .

The first written accounts indicate that the first Europeans to reach Alaska came from Russia. One legend holds that the first Russian settlement in Alaska was founded when boats from a 1648 expedition of , which was meant to go to the , were carried off course and carried to Alaska. There is no evidence, however, of such a settlement or settlements. It is possible that Dezhnyev and Fedot Alekseev, a Russian merchant, became the first people to sail into the from the Pacific through what is now the .Fact|date=April 2007 His discovery was never forwarded to the central government, leaving the question of whether or not Siberia was connected to North America. In 1725, called for another expedition.

On , Chirikov sighted land, probably the west side of Prince of Wales Island in Southeast Alaska. [cite web | title=Russia's Great Voyages | url=http://www.calacademy.org/exhibits/science_under_sail/people.html | accessdate= September 23 | accessyear= 2005 ] He sent a group of men ashore in a longboat, making them the first Europeans to land on the northwestern coast of .

On roughly , Bering and the crew of "St. Peter" sighted on the Alaskan mainland; they turned westward toward Russia soon afterward. Meanwhile, Chirikov and the "St. Paul" headed back to Russia in October with news of the land they had found.

In November, however, Bering's ship was wrecked on . There, Bering fell ill and died, and the ship was dashed to pieces by high winds. The stranded crew wintered on the island, then the survivors built a boat from the wreckage and set sail for Russia in August 1742. Bering's crew reached the shore of Kamchatka in 1742, carrying word of the expedition. The sea otter pelts they brought, soon judged to be the finest in the world, would spark Russian settlement in Alaska.

Subsequently, small associations of fur traders began to sail from the shores of towards the . As the runs from Siberia to America became longer expeditions (lasting two to four years or more), the crews established hunting and trading posts. By the late 1790s, these had become permanent settlements. Approximately half of the fur traders were from various European parts of the or from Siberia. The others were indigenous people from Siberia or Siberians with mixed indigenous, European and Asian origins.
[

, Alaska's West coast and Russia's East coast] Rather than hunting the marine life for themselves, the Russians forced the to do the work for them.

As the animal populations declined, the Aleuts, already too dependent on the new barter economy created by the Russian fur trade, were increasingly coerced into taking greater and greater risks in the highly dangerous waters of the North Pacific to hunt for more otters. As the powerful Shelikhov-Golikov Company established itself as a monopoly, skirmishes and violent incidents turned into systematic violence as a tool of colonial exploitation of the indigenous people. When the Aleuts revolted and won some victories, the Russians retaliated, killing many and destroying their boats and hunting gear, leaving them no means of survival. Eighty percent of the Aleut population was destroyed by diseases, against which they had no , during the first two generations of Russian contact. [ [http://www.alaska.net/~aleut/Culture_History.html The Aleut Corporation Aleut History] ]

Though the was never very profitable, because of the costs of transportation, most Russian traders were determined to keep the land for themselves. In 1784, Grigory Ivanovich Shelikhov, who would later set up the Russian-Alaska Company that colonized early Alaska, arrived in Three Saints Bay on with two ships, the "Three Saints" and the "St. Simon". [cite web | title=Alaska History Timeline | url=http://kodiakisland.net/timeline.html | accessdate= August 31 | accessyear= 2005 ] The indigenous Koniag harassed the Russian party and Shelikhov responded by killing hundreds and taking hostages to enforce the obedience of the rest. Having established his authority on Kodiak Island, Shelikhov founded the second permanent Russian settlement in Alaska (after Unalaska) on the island's Three Saints Bay.

In 1790, Shelikhov, back in Russia, hired to manage his Alaskan fur enterprise. Baranov moved the colony to the northeast end of Kodiak Island, where was available. The site later became what is now the city of Kodiak. Russian members of the colony took Koniag wives and started families whose names continue today, such as Panamaroff, Petrikoff, and Kvasnikoff. In 1795, Baranov, concerned by the sight of non-Russian Europeans trading with the Natives in southeast Alaska, established Mikhailovsk six miles (10 km) north of present-day . He bought the land from the Tlingits, but in 1802, while Baranov was away, Tlingits from a neighboring settlement attacked and destroyed Mikhailovsk. Baranov returned with a Russian warship and razed the Tlingit village. He then built the settlement of New Archangel. It became the capital of Russian America and today is the city of Sitka, which covers what was previously the Mikhailovsk area.

As Baranov secured the Russians' physical presence in Alaska, the Shelikhov family continued to work back in Russia to win a on Alaska's fur trade. In 1799, Shelikhov's son-in-law, , had acquired a monopoly on the American fur trade from Tsar Paul I. Rezanov then formed the . As part of the deal, the expected the company to establish new settlements in Alaska and carry out an expanded colonization program.

By 1804, Alexandr Baranov, now manager of the Russian&ndash;American Company, had consolidated the company's hold on fur trade activities in the Americas following his victory over the local Tlingit clan at the . Despite these efforts, the Russians never fully colonized Alaska. For the most part they clung to the and shunned the inland. By the 1830s, the Russian monopoly on trade was weakening. The set up a post on the southern edge of Russian America in 1833. The British-Canadian firm began siphoning off trade.

The Americans were also becoming a force. Baranov began to depend heavily on American supply ships, since they came more frequently than Russian ones. In addition, Americans could sell furs to the Canton market, which was closed to the Russians. The downside was that American hunters and encroached on territory Russians considered theirs. In 1812 a settlement was reached giving the Russians exclusive rights to above Latitude 55° North, the Americans to that below. The agreement soon went by the wayside, however, and with Baranov's retirement in 1818, the Russian hold on Alaska was further weakened.

When the Russian-American Company's was renewed in 1821, it stipulated that the chief managers from then on be officers. Most naval officers did not have any experience in the fur trade, so the company suffered. The second charter also tried to cut off all contact with foreigners, especially the competitive Americans, but this strategy backfired since the Russian colony had become used to relying on American supply ships, and America had become a valued customer for furs. Eventually the Russian&ndash;American Company entered into an agreement with the Hudson's Bay Company, which gave the British rights to sail through Russian territory.

Although the mid&ndash;1800s were not a good time for Russians in Alaska, conditions improved for the coastal Alaska Natives who had survived contact, primarily the Aleuts, Koniags, and Tlingits. The Tlingits were never conquered and continued to wage on the Russians into the 1850s. The Aleuts, many of whom had been removed from their home islands and sent as far south as California to hunt sea otter for Russians, continued to decline in population during the 1840s. The naval officers of the Russian&ndash;American Company established schools and s for the Aleuts and gave them jobs. Russian Orthodox clergy moved into the Aleutian Islands. The Aleut population began to increase.

At Three Saints Bay, Shelikov built a school to teach the natives to read and write Russian, and introduced the first resident missionaries and clergymen who spread the faith. This faith (with its liturgies and texts, translated into Aleut at a very early stage) had been informally introduced, in the 1740s-1780s, by the fur traders who founded local families or symbolically adopted Aleut trade partners as godchildren to gain their loyalty through this special personal bond. The missionaries soon opposed the exploitation of the indigenous populations and their reports remain one of our main sources on the violence exercised to establish colonial rule in this period.

Inspired by the same pastoral theology as or , the origins of which come from early Christianity's need to adapt to the cultures of Antiquity, missionaries in Russian America applied a strategy that placed value on local cultures and encouraged indigenous leadership in parish life and missionary activity. This cultural policy was originally intended to gain the loyalty of the indigenous populations by establishing the authority of Church and State as protectors of over 10,000 inhabitants of Russian America (where the number of ethnic Russian settlers had always been less than the record 812, almost all concentrated in Sitka and Kodiak).

A side effect of the missionary strategy was to generate a new and autonomous form of indigenous identity, allowing many native traditions to survive in local "Russian" Orthodox tradition and in the religious life of the villages. Part of this modern indigenous identity is an alphabet and the basis for a written literature in almost each of the ethnic-linguistic groups in the Southern half of Alaska. Father Ivan Veniaminov (later St. ), famous throughout Russian America, also developed an Aleut for hundreds of languages and dialects based on the Russian alphabet.

The most visible trace of the Russian colonial period in contemporary Alaska is the presence of nearly ninety Russian Orthodox parishes with a membership of over 20,000 men, women, and children, almost exclusively indigenous people, including several Athabascan groups of the interior, very large Yup'ik communities, and the quasi-totality of the Aleut and Koniag populations. Among the few Tlingit Orthodox parishes, the large group in Juneau adopted Orthodox Christianity only after the Russian colonial period, in an area where there had been no Russian settlers nor missionaries. What probably explains such an extent of a local Russian Orthodox tradition and its persistence is the merger of local cultures and Christian beliefs and rituals. It is a situation comparable in many aspects to the history of Latin American Catholicism.

ale of Alaska to the United States

By the 1860s, the Russian government was considering ridding itself of its colony. Zealous overhunting had severely reduced the fur-bearing animal population, and competition from the British and Americans exacerbated the situation. This, combined with the difficulties of supplying and protecting such a distant colony, brought about a waning interest. After Russian America was sold to the U.S., all the holdings of the Russian&ndash;American Company were liquidated.

Following the transfer, many elders of the local tribe maintained that "Castle Hill" comprised the only land that Russia was entitled to sell. Native land claims were not addressed until the latter half of the 20th Century, with the signing of the Alaska Native Claims Settlement Act.

At the height of Russian America, the Russian population had reached 700. They and the Creoles, who had been guaranteed the privileges of citizens in the United States, were given the opportunity of becoming citizens within a 3&ndash;year period, but few decided to exercise that option. General ordered the Russians out of their homes in Sitka, maintaining that they were needed for the Americans, and the Russians complained of rowdiness of the troops and assaults. Many Russians returned to Russia, while others travelled to and the to seek their fortunes.