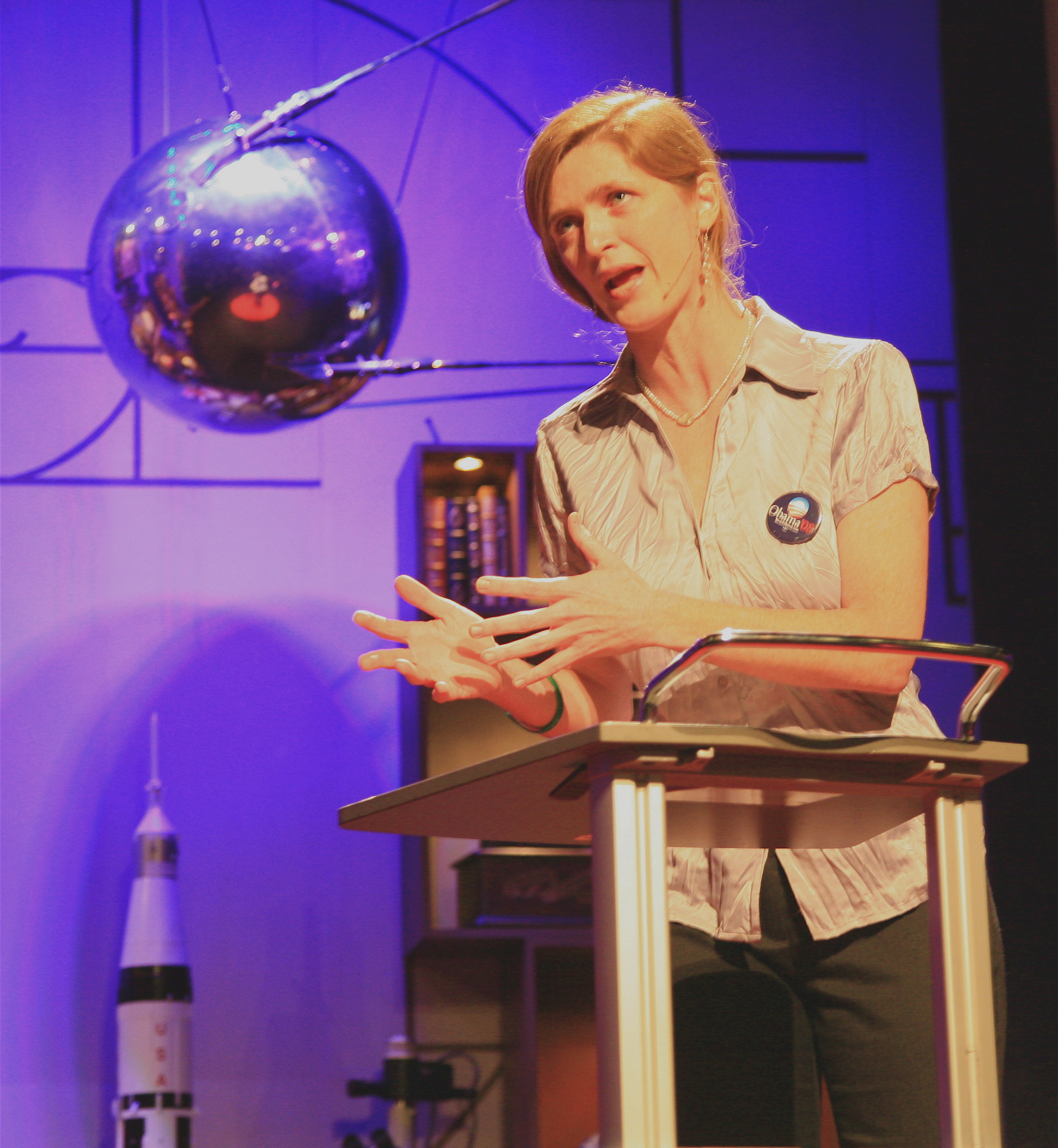 Samantha Power (born 1970 in ) is an journalist, writer, and academic. She is currently affiliated with the at 's . Power has been a winner of the and was a senior adviser to U.S. Democratic Party presidential candidate until March 2008 when she resigned after calling Hillary Clinton a "monster."

Power was born and raised in before emigrating to the in 1979. She attended Lakeside High School in , where she was a member of the cross country team and the basketball team. She later graduated from .

When she returned to the United States, she attended , graduating in 1999. Her first book, "", grew out of a paper she wrote in law school.

A scholar of foreign policy especially as it relates to , , and , she is currently the Professor of Practice of Global Leadership and Public Policy at Harvard's .

In 2004, Power was named by "" as one of the 100 top scientists and thinkers of that year. [ [http://www.time.com/time/subscriber/2004/time100/scientists/100power.html TIME Magazine: TIME 100: Samantha Power ] ] In fall 2007, she began writing a regular column for "Time". Power appears in Charles Ferguson's 2007 documentary, "," which alleges numerous missteps by the Bush administration in the U.S. war in Iraq.

Power spent 2005-06 working in the office of U.S. Senator as a foreign policy fellow, where she was credited with sparking and directing Obama's interest in the [ [http://www.rollingstone.com/politics/story/13390609/campaign_08_the_radical_roots_of_barack_obama/4 "The Radical Roots of Barack Obama",] ""] . She served as a senior foreign policy adviser to Obama's 2008 presidential campaign until she was forced to resign after referring to Hillary Clinton as "a monster" in an interview with "" in London. Power apologized for the remarks and resigned from the campaign shortly thereafter.

Her book "", won the in 2003. It offers a survey of the origin of the word genocide, the major genocides of the 20th century, as well as an analysis of some of the underlying reasons for the persistent failure of governments and the international community to collectively identify, recognise and then respond effectively to genocides ranging from the Armenian to the Rwandan genocide.

Her next book, "Chasing the Flame: Sergio Vieira de Mello and the Fight to Save the World" was released on February 14, 2008. It concerns , the and Special Representative in who was killed in the in along with , , , and other members of his staff, on the afternoon of August 19, 2003.

Alongside her advocacy for Barack Obama's candidacy, Power is best known for her efforts to increase awareness with regard to genocide and human rights abuses, particularly the Darfur conflict. In 2006, she contributed to "Screamers", a movie about the Darfur, Armenian, and other genocides of the 20th and 21st centuries.

Power has become a leading voice calling for armed intervention into humanitarian crisis situations, endorsing the and becoming a founding Board member.

In February and March 2008, Power began an international book tour to promote her book, "Chasing the Flame". Because of her involvement in the Obama campaign, many of the interviews she gave revolved around and her and Barack Obama's foreign-policy views, as well as the 2008 campaign. Notable statements she made during the book tour include the following:

* In an interview with the 's "" on March 6, Power stated that Barack Obama's pledge to "have all U.S. combat brigades out of Iraq within 16 months" [ [http://www.barackobama.com/issues/iraq/ Issues: Iraq - Obama'08 (campaign web site)] ] was a "best case scenario" that "he will revisit when he becomes president." [ [http://news.bbc.co.uk/2/hi/programmes/hardtalk/7281805.stm HARDtalk: Samantha Power - BBC News: Programmes 2008-03-06] ] Challenged by the host as to whether this contradicted Obama's campaign commitment, she responded, "You can’t make a commitment in March 2008 about what circumstances will be like in January of 2009.... He will, of course, not rely on some plan that he’s crafted as a presidential candidate or a U.S. Senator. He will rely upon a plan – an operational plan – that he pulls together in consultation with people who are on the ground to whom he doesn’t have daily access now, as a result of not being the president." [ [http://www.politico.com/blogs/bensmith/0308/Power_on_Obamas_Iraq_plan_best_case_scenario.html Power on Obama's Iraq plan: "best case scenario" - Polito: Ben Smith (weblog) 2008-03-07] ] She concluded by saying that "what we can take seriously is that he will try to get U.S. forces out of Iraq as quickly and responsibly as possible." [ [http://news.bbc.co.uk/2/hi/programmes/hardtalk/7281805.stm HARDtalk: Samantha Power - BBC News: Programmes 2008-03-06] ]

* In a March 6 interview with "", she said: "We fucked up in Ohio. In Ohio, they are obsessed and Hillary is going to town on it, because she knows Ohio's the only place they can win". [ [http://thescotsman.scotsman.com/latestnews/Inside-US-poll-battle-as.3854371.jp "Hillary Clinton's a monster': Obama aide blurts out attack in Scotsman interview" - The Scotsman 2008-03-06] ] [ [http://blogs.abcnews.com/politicalpunch/2008/03/obama-foreign-p.html Political Punch ] ] "She is a monster, too -- that is off the record -- she is stooping to anything... You just look at her and think, 'Ergh.' But if you are poor and she is telling you some story about how Obama is going to take your job away, maybe it will be more effective. The amount of deceit she has put forward is really unattractive."

Power apologized for the "monster" remarks on the night of the March 6 interview, saying that they "do not reflect my feelings about Sen. Clinton, whose leadership and public service I have long admired." [ [http://www.nydailynews.com/news/politics/2008/03/07/2008-03-07_barack_obama_forced_to_decry_advisers_mo.html Barack Obama forced to decry adviser's 'monster' remarks of Hillary Clinton - New York Daily News 2008-03-07] ] In the wake of reaction to the remarks, she resigned from the campaign the next day. [ [http://www.latimes.com/news/politics/la-na-campaign8mar08,0,4538249.story 'Obama aide forced out for calling Clinton "a monster"'] ] Soon afterwards, the "" said that it "might have been the most ill-starred book tour since the invention of ." [ [http://www.weeklystandard.com/Content/Protected/Articles/000/000/014/858jhkph.asp "Power Outage"] , "Weekly Standard", March 17, 2008]

She also appeared on "" on March 17, 2008, where she also explained that she does not really mean that Hillary Clinton is a monster.

According to Sam Stein at "", while promoting her book, Power has "hinted that she could be part of that hypothetical cabinet" if Obama were elected President. [Samantha Power Unapologetic About Iraq Remarks, Hints At Return, http://www.huffingtonpost.com/2008/03/26/samantha-power-unapologet_n_93493.html]

* [http://www.nypl.org/research/chss/pep/pepdesc.cfm?id=3920 Samantha Power in conversation with Azar Nafisi] at LIVE from the New York Public Library, February 21, 2008
* [http://www.guernicamag.com/interviews/46/a_witness_to_genocide/ Interview] on Sudan for guernicamag.com
* [http://globetrotter.berkeley.edu/people2/Power/power-con0.html Interview] at Institute of International Studies, University of California, Berkeley
* [http://www.identitytheory.com/people/birnbaum47.html Interview] at IdentityTheory.com
* [http://globetrotter.berkeley.edu/people2/Power/power-con0.html Interview] with Harry Kreisler on Conversations with History about "Genocide and U.S. Foreign Policy
* [http://scholarsbank.uoregon.edu/dspace/handle/1794/4313 Speech (Video)] "Can Genocide Be Stopped in an Age of Terror?" Keynote address for the Witnessing Genocide Symposium, , ,
* [http://thescotsman.scotsman.com/latestnews/Inside-US-poll-battle-as.3854371.jp Interview] with "," that led to Ms. Power's resignation from the Obama campaign and apology.
* [http://www.02138mag.com/magazine/article/2554.html Interview] in on "Chasing the Flame: Sergio Vieira de Mello and the Fight to Save the World", the purpose of the United Nations and Barack Obama
* [http://www.democracynow.org/2008/2/22/samantha_power_on_chasing_the_flame Interview about "Chasing the Flame"] on " with , " , (video, audio, and print transcript)
** [http://www.democracynow.org/2008/2/22/samantha_power_v_jeremy_scahill "Debate] on U.S. Actions in the Balkans, the Independence of Kosovo, the Iraq Sanctions and Humanitarian Intervention": Samantha Power vs. on "," , (video, audio, and print transcript)

* [http://www.columbia.edu/cu/current/articles/summer2008/arrow.html Review of "Chasing the Flame": Sergio Vieira De Mello and the Fight to Save the World by Sara Arrow in The Current, a Columbia University journal]
* [http://www.complete-review.com/reviews/ghistory/powers.htm Reviews of "A Problem from Hell": America and the Age of Genocide]