This article is about the musician. For his son, the artist and gallery manager, see Charles Edward Hallé 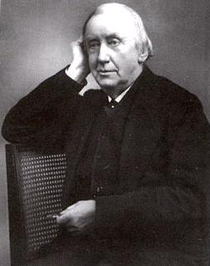 Hallé was born in Hagen, Westphalia, Germany who after settling in England changed his name from Karl Halle. His first lessons were from his father, an organist, studying in Darmstadt and later Paris.

In 1848, Hallé moved to England, settling in Manchester where he started a series of classical music concerts. He conducted elsewhere in the country also, as well as performing as a pianist. He was the first pianist to play the complete series of Beethoven’s piano sonatas in England.

He studied under Rink at Darmstadt in 1835, and as early as 1836 went to Paris, where for twelve years he often assoociated with Luigi Cherubini, Frédéric Chopin, Franz Liszt and other musicians, and enjoyed the friendship of such great literary figures as Alfred de Musset and George Sand. He had started a set of chamber concerts with Jean Delphin Alard and Auguste Franchomme with great success, and had completed one series of them when the revolution of 1848 drove him from Paris, and he settled, with his wife and two children, in London.

Hallé's piano recitals, given at first from 1850 in his own house, and from 1861 in St James's Hall, Piccadilly, were an important feature of London musical life, and it was due in great measure to them that a knowledge of Beethoven's pianoforte sonatas became general in English society. 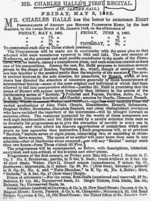 At the Musical Union founded by John Ella, and at the Popular Concerts from their beginning, Hallé was a frequent performer, and from 1853 was director of the Gentlemen's Concerts in Manchester, where, in 1857, he started a series of concerts of his own, raising the orchestra to a pitch of perfection quite unknown at that time in England.

In 1888 Hallé married the violinist Wilma Neruda, widow of Ludvig Norman and daughter of Josef Neruda, members of whose family had long been famous for musical talent. In 1888, the same year he was knighted; and in 1890 and 1891 he toured with his wife in Australia and elsewhere. He died at Manchester on 25 October 1895. Hallé exercised an important influence in the musical education of England; if his piano playing, by which he was mainly known to the public in London, seemed remarkable rather for precision than for depth, for crystal clearness rather than for warmth, and for perfect realization of the written text rather than for strong individuality, it was at least of immense value as giving the composer's idea with the utmost fidelity. Those who were privileged to hear him play in private, like those who could appreciate the power, beauty and imaginative warmth of his conducting, would have given a very different verdict; and they were not wrong in judging Hallé to be a man of the widest and keenest artistic sympathies, with an extraordinary gift of insight into music of every school, as well as a strong sense of humour. He fought a long and arduous battle for the best music, and never forgot the dignity of his art. Although his technique was that of his youth, of the period before Liszt, the ease and certainty he attained in the most modern music was not the less wonderful because he concealed the mechanical means so completely.

Lady Hallé, who from 1864 was one of the leading solo violinists of the time, was constantly associated with her husband on the concert stage until his 1895 death in Manchester.