/ˈlændruː/ lan-drew;[1] born November 23, 1955) is the senior United States Senator from the State of Louisiana and a member of the Democratic Party.

Born in Arlington, Virginia, Landrieu was raised in New Orleans, Louisiana. She is the daughter of former New Orleans mayor and Secretary of the United States Department of Housing and Urban Development, Moon Landrieu, and the sister of the current Mayor of New Orleans and former Lieutenant Governor of Louisiana Mitch Landrieu. She received her baccalaureate degree from Louisiana State University in Baton Rouge. After working as a real estate agent for several years, she was elected as a state representative (1980–1988) and state treasurer (1988–1996). She won a close race for the U.S. Senate in 1996; she was re-elected by increasing margins in competitive races in 2002 and 2008.

Landrieu is one of the most conservative Democrats in the Senate, often opposing her party's positions. Her opposition to the public option played a major role in the crafting of the health insurance reform bills of 2010. She became a spokeswoman for federal emergency relief in the wake of Hurricane Katrina in 2005, which devastated her state. She chairs the Senate Committee on Small Business and Entrepreneurship. In 2005, she sponsored an unprecedented Senate resolution by which the US Senate apologized for its failure to enact anti-lynching legislation during the early 20th century, when it was very much needed.

Landrieu was born in Arlington, Virginia to Verna Satterlee and former New Orleans mayor Moon Landrieu,[2] and raised in New Orleans. She was raised as a Roman Catholic and attended Ursuline Academy of New Orleans. She graduated from Louisiana State University in Baton Rouge in 1977 where she was a member of Delta Gamma sorority.

Before entering politics, she worked as a real estate agent. She was elected as a member of the Louisiana House of Representatives, serving from 1980 to 1988 and representing a New Orleans district.

She was elected as Louisiana state treasurer from 1988–1996. In the 1987 primary for treasurer, she defeated two legislative colleagues, Kevin P. Reilly, Sr., chief executive officer at the time of Lamar Advertising Company in Baton Rouge, and Claude "Buddy" Leach, a former U.S. representative and the current chairman of the Louisiana Democratic Party. Landrieu gave up the treasurer's office to run for governor of Louisiana in 1995, but finished third in the state's jungle primary. The eventual winner was Democrat-turned-Republican Murphy J. "Mike" Foster, Jr.

Landrieu and her husband, attorney Frank Snellings (born 1949), who grew up in Monroe, have two children, Connor and Mary Shannon. 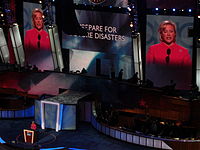 Landrieu speaks during the second day of the 2008 Democratic National Convention in Denver, Colorado.

Landrieu was elected in 1996 to the U.S. Senate seat previously held by John Bennett Johnston, Jr. of Shreveport after winning a close and controversial runoff election.[3] This is called the general election in Louisiana. She defeated Louisiana State Representative Woody Jenkins of Baton Rouge.

Landrieu narrowly won re-election in the 2002 mid-term election. She defeated Suzanne Haik Terrell of New Orleans. Some experts and pundits had considered Landrieu as a possible running mate for presidential candidate John Kerry in the 2004 election before he selected then- Senator John Edwards of North Carolina. In 2004 Landrieu became Louisiana's senior senator upon the retirement of John Breaux, who was replaced by Republican David Vitter.

In 2005 Landrieu sponsored a resolution, which the Senate passed in an unprecedented action, to formally apologize for its repeated failure in the early twentieth century to pass anti-lynching legislation.[4] The Senate Southern white Democrats had filibustered the Dyer bill in 1922[5] and two other bills that passed the House. At the time, African Americans suffered a high rate of lynchings in the South; this coincided with their disfranchisement in the South from 1890-1910,[6] which persisted until after passage of federal civil rights legislation of the 1960s.

Landrieu has worked to secure funding for Louisiana projects as one of her top priorities. She held high-profile hearings on the mistakes of the Federal Emergency Management Agency (FEMA) in the wake of hurricanes Katrina and Rita in 2005. In 2008, she won a relatively comfortable 52% to 46% re-election to a third term in a race against her challenger, Louisiana State Treasurer John Neely Kennedy. He was a former Democrat who switched to the Republican Party in 2007.[7]

On December 15, 2008, it was announced that Landrieu would become Chairwoman of the Senate Committee on Small Business and Entrepreneurship for the 111th Congress when former Chairman John Kerry left to lead the Senate Foreign Relations Committee, previously headed by Vice President-elect Joe Biden.[8]

In September 2010 Landrieu announced she would hold up OMB director Jacob Lew’s confirmation until the administration lifted or eased a federal freeze on deepwater oil-and-gas drilling. Her delay of Lew’s nomination came despite broad bipartisan support for appointing him to OMB. The Senate Budget Committee recommended that Lew be confirmed on a 22-1 vote.[9] 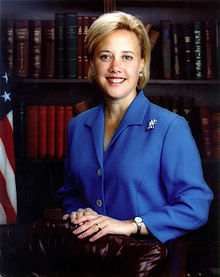 By national standards, Landrieu is among the most conservative Democrats in the U.S. Senate,[10] and is a member of the New Democrat Coalition.

Landrieu supports eliminating the estate tax permanently, and voted for the tax cut passed in 2001. On November 17, 2005, she was one of only four Democrats to vote against repealing the portions of the tax cuts passed in 2001 and 2003 that more Democrats have charged unfairly benefit the wealthy. She voted for the Class Action Fairness Act of 2005 and the Protection of Lawful Commerce in Arms Act. In 2004, Landrieu was one of only six Democrats to vote against renewing the ban on semi-automatic firearms. She has also been one of the few Democrats to support drilling in the Arctic National Wildlife Refuge.

Landrieu voted for the confirmation of Chief Justice John Roberts in 2005, but in 2006, she opposed Samuel Alito, though she did vote in favor of cloture to send the nomination to an up-or-down vote.

Subsequent to the 2006 midterm election, in which the Democratic Party gained control of both houses of Congress, Landrieu announced (along with Republican Olympia Snowe of Maine) the formation of the "Common Ground Coalition", a group of moderate senators of both parties, with the goal of finding bipartisan consensus on legislative matters.[8]

Landrieu was opposed to the public health insurance option in the America's Affordable Health Choices Act of 2009[13] (HR 3200) until the bill was rewritten to send a $300,000,000 payment to Medicaid for her home state.[14] When two pages were added to the bill to place $300 million in Louisiana's Medicaid system, she changed her web page in order to reflect her support of the program.[15] Conservative figures referred to the deal as the "Louisiana Purchase".[16] As a result, prominent conservative figures Glenn Beck and Rush Limbaugh called her a "high-priced prostitute".[17]

On November 21, 2009, Landrieu voted with fifty-nine other Senators to bring the health care bill up for debate. On December 8, 2009, she voted against the Nelson-Hatch-Casey amendment which proposed to ban federal funding for private plans that covered elective abortions but allowed individuals to purchase separate individual riders that would cover abortions.[16]

After Senator Harry Reid added the concession to the bill which sent $300 million to Medicaid recipients in Louisiana, she described the bill as 'imperfect, but taking many steps to improve our broken health care system.'

Sen. Landrieu (center) joins Women of the Storm from the Gulf Coast

Hurricane Katrina destroyed Landrieu's lakeside New Orleans home. The senator has become a national spokeswoman for victims of the hurricane, and has complained of "the staggering incompetence of the national government."[20]

In the weeks following Katrina, Landrieu and fellow Senator David Vitter co-sponsored the Hurricane Katrina Disaster Relief and Economic Recovery Act of 2005 (S.1765),[21] a 440-page aid package worth an estimated $250 billion[22][23] (roughly $550,000 per resident) in order to rebuild New Orleans, a city of 453,726 pre-Katrina.[24] The bill was read twice by Congress, then referred to the United States Senate Committee on Finance.[25]

On August 3, 2007, Landrieu broke ranks with Democrats when she and Louisiana Rep. Charlie Melancon sided with Republicans and the Bush Administration in voting for the Protect America Act, an amendment to the USA Patriot Act further expanding wiretap powers.[26]

Landrieu earmarked $2 million for a reading program whose founder supported her campaign for reelection. Randy Best, founder of the Voyager Expanded Learning literacy program, had hosted a fundraising event that raised $30,000 for Landrieu's reelection campaign days before she proposed his reading program in the earmark. Best and his company's top associates were among those who donated to Landrieu's campaign.[27] This earned her a spot on the Citizens for Responsibility and Ethics in Washington advocacy group's "Top 20 Most Corrupt Members of Congress" report.[28]

In 2007, Landrieu was inducted into the Louisiana Political Museum and Hall of Fame in Winnfield.[29]

On January 25, 2010, four Republican conservative activists, including Stan Dai, Joseph Basel, both 24; Robert Flanagan, son of Bill Flanagan, acting U.S. Attorney in Louisiana; and conservative filmmaker James O'Keefe, were arrested by US Marshals for their role in a plot to hack the phone system of Landrieu's New Orleans office to record her and her staff's conversations.[30] Two of the alleged co-conspirators posed as telephone repair technicians in order to gain access to the telephone system. O'Keefe admitted to secretly "recording" the interactions with the staff with his cell phone and aiding in the "planning, coordination, and preparation of the operation." [31]

On March 27, 2010, the four were charged with entering federal property under false pretenses, a misdemeanor charge.[32] On May 26, 2010 all four pled guilty before Magistrate Daniel Knowles III in a New Orleans federal court. Three of the four received two years' probation, 75 hours of community service and $1,500 fines; while James O'Keefe received a sentence of three years' probation, 100 hours of community service and a $1,500 fine.[33]