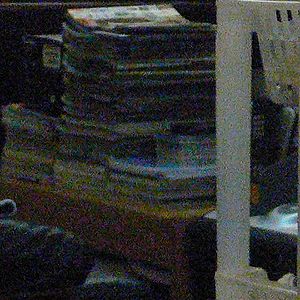 Noise clearly visible in an image from a digital camera

Image noise is random (not present in the object imaged) variation of brightness or color information in images, and is usually an aspect of electronic noise. It can be produced by the sensor and circuitry of a scanner or digital camera. Image noise can also originate in film grain and in the unavoidable shot noise of an ideal photon detector.

Image noise is an undesirable by-product of image capture that adds spurious and extraneous information.

The magnitude of image noise can range from almost imperceptible specks on a digital photograph taken in good light, to optical and radioastronomical images which are almost entirely noise, from which a small amount of information can be derived by sophisticated processing (a noise level that would be totally unacceptable in a photograph; it would be impossible even to determine what the subject was).

The standard model of amplifier noise is additive, Gaussian, independent at each pixel and independent of the signal intensity, caused primarily by Johnson–Nyquist noise (thermal noise), including that which comes from the reset noise of capacitors ("kTC noise").[2] In color cameras where more amplification is used in the blue color channel than in the green or red channel, there can be more noise in the blue channel.[3]

Amplifier noise is a major part of the "read noise" of an image sensor, that is, of the constant noise level in dark areas of the image.[4] 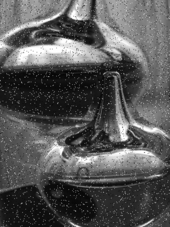 Image with salt and pepper noise

An image containing salt-and-pepper noise will have dark pixels in bright regions and bright pixels in dark regions. This type of noise can be caused by analog-to-digital converter errors, bit errors in transmission, etc.[6][7] Dead pixels in an LCD monitor produce a similar,but non-random, display.

This can be eliminated in large part by using dark frame subtraction and by interpolating around dark/bright pixels.

The dominant noise in the lighter parts of an image from an image sensor is typically that caused by statistical quantum fluctuations, that is, variation in the number of photons sensed at a given exposure level; this noise is known as photon shot noise.[3] Shot noise has a root-mean-square value proportional to the square root of the image intensity, and the noises at different pixels are independent of one another. Shot noise follows a Poisson distribution, which is usually not very different from Gaussian.

In addition to photon shot noise, there can be additional shot noise from the dark leakage current in the image sensor; this noise is sometimes known as "dark shot noise"[3] or "dark-current shot noise".[8] Dark current is greatest at "hot pixels" within the image sensor; the variable dark charge of normal and hot pixels can be subtracted off (using "dark frame subtraction"), leaving only the shot noise, or random component, of the leakage;[9][10] if dark-frame subtraction is not done, or if the exposure time is long enough that the hot pixel charge exceeds the linear charge capacity, the noise will be more than just shot noise, and hot pixels appear as salt-and-pepper noise.

The noise caused by quantizing the pixels of a sensed image to a number of discrete levels is known as quantization noise; it has an approximately uniform distribution, and can be signal dependent, though it will be signal independent if other noise sources are big enough to cause dithering, or if dithering is explicitly applied.[7]

The grain of photographic film is a signal-dependent noise, with similar statistical distribution to shot noise.[11] If film grains are uniformly distributed (equal number per area), and if each grain has an equal and independent probability of developing to a dark silver grain after absorbing photons, then the number of such dark grains in an area will be random with a binomial distribution; in areas where the probability is low; this distribution will be close to the classic Poisson distribution of shot noise. A simple Gaussian distribution is often used as an adequately accurate model.[7]

Film grain is usually regarded as a nearly isotropic (non-oriented) noise source; its effect is made worse by the distribution of silver halide grains in the film also being random.[12]

Some noise sources show up with a significant orientation in images. For example, image sensors are sometimes subject to row noise or column noise.[13] 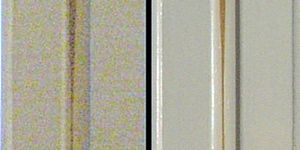 Image on the left has exposure time of >10 seconds in low light. The image on the right has adequate lighting and 0.1 second exposure.

In low light, correct exposure requires the use of long shutter speeds, higher gain (ISO sensitivity), or both. On most cameras, longer shutter speeds lead to increased salt-and-pepper noise due to photodiode leakage currents. At the cost of a doubling of read noise variance (41% increase in read noise standard deviation), this salt-and-pepper noise can be mostly eliminated by dark frame subtraction. Banding noise, similar to shadow noise, can be introduced through brightening shadows or through color-balance processing.[14]

The relative effect of both read noise and shot noise increase as the exposure is reduced, corresponding to increased ISO sensitivity, since fewer photons are counted (shot noise) and since more amplification of the signal is necessary.

The size of the image sensor, or effective light collection area per pixel sensor, is the largest determinant of signal levels that determine signal-to-noise ratio and hence apparent noise levels, assuming the aperture area is proportional to sensor area, or that the f-number or focal-plane illuminance is held constant. That is, for a constant f-number, the sensitivity of an imager scales roughly with the sensor area, so larger sensors typically create lower noise images than smaller sensors. In the case of images bright enough to be in the shot noise limited regime, when the image is scaled to the same size on screen, or printed at the same size, the pixel count makes little difference to perceptible noise levels – the noise depends primarily on sensor area, not how this area is divided into pixels. For images at lower signal levels (higher ISO settings), where read noise (noise floor) is significant, more pixels within a given sensor area will always make the image noisier.

The image sensor has individual photosites to collect light from a given area. Not all areas of the sensor are used to collect light, due to other circuitry. A higher fill factor of a sensor causes more light to be collected, allowing for better ISO performance based on sensor size.[16]

Temperature can also have an effect on the amount of noise produced by an image sensor due to leakage. With this in mind, it is known that DSLRs will produce more noise during summer than winter.[9]

Most algorithms for converting image sensor data to an image, whether in-camera or on a computer, involve some form of noise reduction. There are many procedures for this, but all attempt to determine whether the actual differences in pixel values constitute noise or real photographic detail, and average out the former while attempting to preserve the latter. However, no algorithm can make this judgment perfectly, so there is often a tradeoff made between noise removal and preservation of fine, low-contrast detail that may have characteristics similar to noise. Many cameras have settings to control the aggressiveness of the in-camera noise reduction.

A simplified example of the impossibility of unambiguous noise reduction: an area of uniform red in an image might have a very small black part. If this is a single pixel, it is likely (but not certain) to be spurious and noise; if it covers a few pixels in an absolutely regular shape, it may be a defect in a group of pixels in the image-taking sensor (spurious and unwanted, but not strictly noise); if it is irregular, it may be more likely to be a true feature of the image. But a definitive answer is not available.

This decision can be assisted by knowing the characteristics of the source image and of human vision. Most noise reduction algorithms perform much more aggressive chroma noise reduction, since there is little important fine chroma detail that one risks losing. Furthermore, many people find luminance noise less objectionable to the eye, since its textured appearance mimics the appearance of film grain.

In cases of extreme noise, such as astronomical images of very distant objects, it is not so much a matter of noise reduction as of extracting a little information buried in a lot of noise; techniques are different, seeking small regularities in massively random data.

In video and television, noise refers to the random dot pattern that is superimposed on the picture as a result of electronic noise, the 'snow' that is seen with poor (analog) television reception or on VHS tapes. Interference and static are other forms of noise, in the sense that they are unwanted, though not random, which can affect radio and television signals.

High levels of noise are almost always undesirable, but there are cases when a certain amount of noise is useful, for example to prevent discretization artifacts (color banding or posterization). Some noise also increases acutance (apparent sharpness). Noise purposely added for such purposes is called dither; it improves the image perceptually, though it degrades the signal-to-noise ratio.