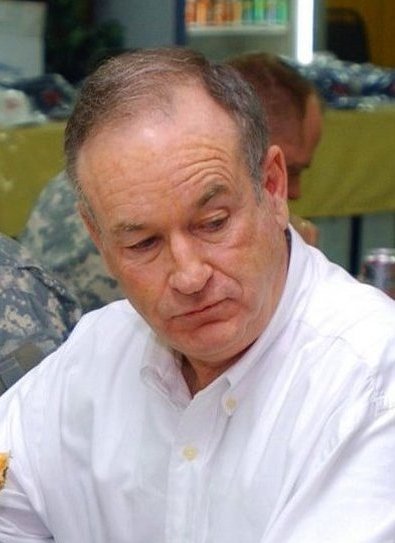 O'Reilly also hosts "", a program syndicated by , and is the author of seven books.

O'Reilly was born in to parents William and Angela O'Reilly, from , and Bergen County, . [cite news|author=Pragoff, Cat|title=Fox News' Bill O'Reilly was in classroom before newsroom|publisher=|date=|page=D10] His father was an accountant for the oil company . In 1951, his family moved to Levittown on . [cite web|url=http://www.frankenlies.com/lies/levittown.htm|title=O’Reilly and the Levittown Issue: Answered|publisher=Franken Lies|accessdate=2008-05-12] After graduating from , a private Catholic boys high school in Mineola, in 1967, O'Reilly attended . While at Marist, O'Reilly played punter in the National Club Football Association, [cite web |author= Duffy, Don| title="Campus Stuff" ("The Circle")|url=http://library.marist.edu/archives/Circle/1970/1970-11-19.pdf |publisher=|date=1970-11-19| accessdate=2008-05-12 |format=PDF] and was also a writer for the school's newspaper, "The Circle". An honors student, he majored in history. He spent his junior year of college abroad, attending Queen Mary College at the . [cite web | author=Marist | title=2001 Commencement Program| publisher=|date=2001-05-19| url=http://www.marist.edu/alumni/oreillyb.html | accessdate=2008-05-12 ] O'Reilly received his B.A. in in 1971. He played semi-professional during this time, as a pitcher for the . After graduating from Marist College, O'Reilly moved to at age 21, where he taught English and history at Monsignor Pace High School for two years. O'Reilly later returned to school and earned a M.A. in Broadcast Journalism from (where he attended school with ) in 1976. While attending Boston University, he was a reporter and columnist for various local newspapers and alternative news weeklies, including "The Boston Phoenix". O'Reilly did his broadcast journalism in Miami during this time and was also an entertainment writer and movie critic for "". O'Reilly also earned a from 's . At Harvard, he was also a student of . [http://www.mediabistro.com/fishbowlDC/television/oreilly_im_mad_as_hell_and_im_not_acting_95868.asp]

In 1980, he anchored his own program on in New York where he won his second Local Emmy for an investigation of corrupt city marshals. In 1982, he was promoted to the network as a correspondent and covered the wars in and the from his base in , . He later left CBS over a dispute concerning the uncredited use in a report by of riot footage shot by O'Reilly's crew in Buenos Aires during the Falklands conflict. (A 1998 novel by O'Reilly, "", depicts a television reporter who has a similar dispute over a Falklands War report. The character proceeds to exact his revenge on network staff in a series of graphically-described murders.) [ [http://www.newyorker.com/fact/content/articles/060327fa_fact "Fear Factor - Bill O’Reilly’s baroque period"] , Nicholas Lemann, "The New Yorker", March 20, 2006]

In 1989, O'Reilly joined the nationally syndicated (now ) program "", a tabloid/gossip television program in competition with "A Current Affair". [cite web|url=http://www.foxnews.com/story/0,2933,1256,00.html |title=Bill O'Reilly Bio|publisher= |accessdate=2007-09-26] He started as senior correspondent and backup anchor for British TV host David Frost, and subsequently became the program's anchor after Frost's termination. In addition to being one of the first American broadcasters to cover the dismantling of the , O'Reilly also obtained the first exclusive interview with murderer and was the first television host from a national current affairs program on the scene of the .

In 1995, O'Reilly was replaced by former and anchor on "Inside Edition." He then enrolled at the Kennedy School of Government at Harvard University, where he received a Master's degree in Public Administration. After Harvard, he was hired by , chairman and of the then startup , to anchor "The O'Reilly Report." The show soon moved to a new time slot, and was renamed, "The O'Reilly Factor".

Political beliefs and points of view

"The O'Reilly Factor" and O'Reilly's talk-radio program, "", focus on news and commentary related to politics most of the time.

He has coined the term "traditionalist" when describing his points of view on various topics, saying the term is not limited to the normal party lines, although his commentary generally supports conservative viewpoints. [ [http://www.signonsandiego.com/news/nation/20040210-0550-campaign-bush-oreilly.html] , Reuters as reported in "The Union Tribune", February 10, 2004]

O'Reilly has long said that he does not belong to or identify with any political party. In 2000, however, "" determined that he was registered with the Republican Party in the state of New York. He said that there had been "no box to fill in" to register as an Independent; in fact, the form did have a box labeled "I do not wish to enroll in a party." Since this disclosure, he has registered as an independent. [http://mediamatters.org/items/200510030001]

Over the years, O'Reilly has been criticized by or had disputes with a number of public figures including , ,

O'Reilly is considered the main inspiration for comedian 's satirical character on the show "", which features Colbert in a "full-dress parody" of "The O'Reilly Factor". [ [http://www.newyorker.com/archive/2006/03/27/060327fa_fact] New Yorker "Fear Factor," Nicholas Lemann, March 2006] On the show, Colbert refers to O'Reilly as "Papa Bear."

Books and other media

In addition, O'Reilly writes a weekly syndicated newspaper column that appears in numerous newspapers, including the "" and the "". [BillOReilly.com, [http://www.billoreilly.com/pg/jsp/general/newspapercolumn.jsp "Newspaper Column List"] , Accessed January 8, 2007.]