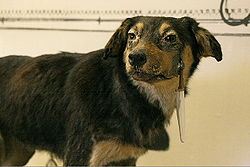 This dog was fitted with a cannula to measure the amount of salivation when presented with a certain stimulus, Pavlov Museum, 2005

Popular forms of classical conditioning that are used to study neural structures and functions that underlie learning and memory include fear conditioning, eyeblink conditioning, and the foot contraction conditioning of Hermissenda crassicornis.

The original and most famous example of classical conditioning involved the salivary conditioning of Pavlov's dogs. During his research on the physiology of digestion in dogs, Pavlov noticed that, rather than simply salivating in the presence of meat powder (an innate response to food that he called the unconditional response), the dogs began to salivate in the presence of the lab technician who normally fed them. Pavlov called these psychic secretions. From this observation he predicted that, if a particular stimulus in the dog's surroundings were present when the dog was presented with meat powder, then this stimulus would become associated with food and cause salivation on its own. In his initial experiment, Pavlov used a bell to call the dogs to their food and, after a few repetitions, the dogs started to salivate in response to the bell.

During simultaneous conditioning, the CS and US are presented and terminated on the same time

The US is presented at regularly timed intervals, and CR acquisition is dependent upon correct timing of the interval between US presentations. The background, or context, can serve as the CS in this example.

The CS and US are not presented together. Usually they are presented as independent trials that are separated by a variable, or pseudo-random, interval. This procedure is used to study non-associative behavioral responses, such as sensitization.

The CS is presented in the absence of the US. This procedure is usually done after the CR has been acquired through "forward conditioning" training. Eventually, the CR frequency is reduced to pre-training levels. Essentially, the stimulus is presented until habituation occurs.

After conditioning, subjects that show the conditional response not just to the original conditional stimulus but also to new stimuli that resemble that stimulus are displaying what is called generalization.

It was found that that without the US (food in this case), the bell elicited less and less salivation on subsequent trials eventually becoming extinct as a behavior. Even with extinction, there was no clear evidence that the animal returned to its fully unconditioned state. The conditional reflex can be partially renewed after a certain time period has passed, a phenomenon known as spontaneous recovery. Pavlov concluded that the conditional reflex is not entirely lost during extinction, but possibly inhibited. In this state, the behavior can be recovered after the passage of time or the recurrence of the unconditional stimuli.

In this procedure, a CS is presented several times before paired CS–US training commences. The pre-exposure of the subject to the CS before paired training slows the rate of CR acquisition relative to organisms that are not CS pre-exposed. Also see Latent inhibition for applications.

Phase 1
A CS (CS+) is paired with a US until asymptotic CR levels are reached.

Phase 2
CS+/US trials are continued, but interspersed with trials on which the CS+ in compound with a second CS, but not with the US (i.e., CS+/CS− trials). Typically, organisms show CRs on CS+/US trials, but suppress responding on CS+/CS− trials.

Phase 3
In this retention test, the previous CS− is paired with the US. If conditioned inhibition has occurred, the rate of acquisition to the previous CS− should be impaired relative to organisms that did not experience Phase 2.

Test
A separate test for each CS (CS1 and CS2) is performed. The blocking effect is observed in a lack of conditional response to CS2, suggesting that the first phase of training blocked the acquisition of the second CS.

Classical conditioning is short-term, usually requiring less time with therapists and less effort from patients, unlike humanistic therapies.[citation needed] The therapies mentioned are designed to cause either aversive feelings toward something, or to reduce unwanted fear and aversion.

Certain drug reactions can also be partly viewed in terms of classical conditioning. Conditional drug reactions can occur if a drug is repeatedly paired with a stimulus. After a time, the stimulus alone can evoke in the drug user the same effects as the drug itself. This is sometimes the case with caffeine; habitual coffee drinkers find that simply the smell of coffee gives them a feeling of alertness (Psychology 102). In other cases, repeated use of a drug can cause the body to develop a compensatory reaction to the drug in which the body enters a state that will counterbalance the effects of the drug. For example, if a drug causes the body to become less sensitive to pain, the compensatory reaction will be one that makes the user more sensitive to pain, to counteract the drug's pain-relieving effects. Thus, in the context of drug use, this compensatory reaction is used to restore the body to homeostasis. Upon the repeated pairing of a drug and a stimulus, over time the stimulus, which has come to be associated with the effects of drug use, can trigger compensatory reactions in the body that counteract the effects of the drugs and thereby contributing to drug tolerance. Additionally, in the cases where the stimulus is absent at the time of drug use, the user is likely to overdose since there is no stimulus to elicit the compensatory reaction to counteract the effects of the drug (Psychology 103).

Signals that consistently precede food intake can become conditional stimuli for a set of bodily responses that prepares the body for food and digestion. These reflexive responses include the secretion of digestive juices into the stomach and the secretion of certain hormones into the blood stream, and they induce a state of hunger (Psychology 104). An example of conditional hunger is the "appetizer effect." Any signal that consistently precedes a meal, such as a clock indicating that it is time for dinner, can cause people to feel hungrier than before the signal. The lateral hypothalamus (LH) is involved in the initiation of eating. The nigrostriatal pathway, which includes the substantia nigra, the lateral hypothalamus, and the basal ganglia have been shown to be involved in hunger motivation.

From an evolutionary viewpoint, classical conditioning involves an individual preparing itself for important biological events in the individual's life, particularly sexual activity. For example, a stimulus that is conditioned to occur before sexual interaction prepares animals both mentally (increased sex drive) and physically (sexually aroused body responses). Sexual arousal can actually be conditioned in human subjects by pairing a conditional stimulus like a picture of a jar of pennies with an unconditional stimulus like an erotic film clip. Similar experiments involving blue gourami fish and domesticated quail have shown that these conditioning techniques often increase the number of offspring, compared to unconditioned males. These findings could possibly be beneficial in terms of conditioning techniques aimed to increase fertility rates in infertile individuals and endangered species (Psychology, Gray).

Stimulus–response (S–R) theory suggests that the CS is associated with the US within the brain, without involving conscious thought. The second, stimulus–stimulus (S–S) theory, involves cognitive activity in which the CS is associated to the concept of the US, a subtle but important distinction.

S–S theory is a theoretical model of classical conditioning that suggests a cognitive component is required to understand classical conditioning, while S–R theory proposes that a cognitive component is merely at play. S–R theory suggests that an animal can learn to associate a CS with the impending arrival of the associated US, resulting in an observable behavior such as salivation. S–S theory suggests that the animal salivates to the bell because it is associated with the concept of the US, which is a very fine but important distinction.

One of the earliest literary references to classical conditioning can be found in the comic novel The Life and Opinions of Tristram Shandy, Gentleman (1759) by Laurence Sterne. The narrator Tristram Shandy explains[2] how his mother was conditioned by his father's habit of winding up a clock before having sex with his wife:

My father [...] was, I believe, one of the most regular men in every thing he did [...] [H]e had made it a rule for many years of his life,—on the first Sunday-night of every month throughout the whole year,—as certain as ever the Sunday-night came,—to wind up a large house-clock, which we had standing on the back-stairs head, with his own hands:—And being somewhere between fifty and sixty years of age at the time I have been speaking of,—he had likewise gradually brought some other little family concernments to the same period, in order, as he would often say to my uncle Toby, to get them all out of the way at one time, and be no more plagued and pestered with them the rest of the month. [...] [F]rom an unhappy association of ideas, which have no connection in nature, it so fell out at length, that my poor mother could never hear the said clock wound up,—but the thoughts of some other things unavoidably popped into her head—& vice versa:—Which strange combination of ideas, the sagacious Locke, who certainly understood the nature of these things better than most men, affirms to have produced more wry actions than all other sources of prejudice whatsoever.

Another example is in the dystopian novel, A Clockwork Orange in which the novel's anti-hero and protagonist, Alex, is given a solution to cause severe nausea, and is forced to watch violent acts. This renders him unable to perform any violent acts without inducing similar nausea.

Another example is from the TV series The Office. In the episode Phyllis' Wedding Jim conditions Dwight to want a breath mint whenever there is a computer chime.