Dr. Bill Foster, also known as Black Goliath, the second Giant-Man, and the fourth Goliath, is a fictional character, a comic book superhero in the Marvel Comics universe.

Dr. Foster is an African American with powers similar to Giant-Man's, increasing his size and mass to gigantic proportions. He was created by Stan Lee and Don Heck in The Avengers #32 (September 1966). His "Black Goliath" persona was created by Tony Isabella and George Tuska in Power Man #24 (April 1975). Foster became the second Giant-Man in Marvel Two-in-One #55 (September 1979). He became yet the fourth Goliath in The Thing (vol. 2) #1 (January 2006).

Although he became a superhero years after his initial appearance, Bill Foster is the third[citation needed] African American comic book character to become a superhero.

Black Goliath is also the name of the short-lived comic book starring the character, which ran for 5 issues in 1976.

Bill Foster has appeared in the pages various comic books, including among others The Avengers, Power Man, Marvel Two-in-One, The Champions, The Defenders, Marvel Super-Heroes (vol. 3), Marvel Comics Presents, and Civil War.

The character was killed in the fourth issue of the series Civil War.

Bill Foster was born in Watts, Los Angeles, California. Biochemist Dr. Bill Foster works in the Plans and Research Division for Tony Stark's Baltimore factory. He is hired to be the biochemical laboratory assistant of Dr. Henry Pym (a.k.a. Giant-Man). Pym is stuck at the height of 10 feet (3.0 m) for a time and at the behest of Stark, Dr. Foster helps Pym find a cure to change his size back to normal.[1] Foster continues to work as Pym's lab assistant.[2] Foster later investigates the seeming deaths of Henry Pym and Janet Van Dyne.[3] 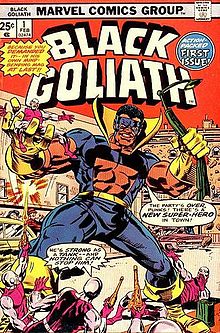 Bill Foster as Black Goliath on the cover of his own short lived title from the 1970s. From Black Goliath #1 (February 1976). Art by Rich Buckler

His origin blurb from the first page of his self-titled book reads: "BILL FOSTER - Dr. William Barrett Foster, DSc, PhD - a child of the GHETTO who has pulled himself up out of the Los Angeles slums to become director of one of the nation's most prestigious research labs. A man whose research has given him the power to instantaneously grow to a height of FIFTEEN FEET, with the strength of a TRUE GIANT. A man who has become... a HERO."

Dr. Foster moves to the West Coast and at some point acquires the formula to "Pym particles" which give him the ability to grow in size like his former employer. Taking the name Black Goliath, he helps Power Man fight the Circus of Crime.[4] He later battles Atom-Smasher, the second Vulcan, and Stilt-Man. The mercenary Warhawk kills Atom-Smasher, and flees before Black Goliath can catch him.[5]

Black Goliath later assists the Champions of Los Angeles in battling Stilt-Man, then joins the group part-time as their technical advisor.[6] Alongside Ben Grimm, the Thing, Black Goliath battles the Hijacker.[7] After the Champions disband, Black Goliath, along with a large group of other heroes, attends a Defenders membership rally. This incarnation of the Defenders battles a number of assembled superhuman criminals for only one mission before disbanding.[8] 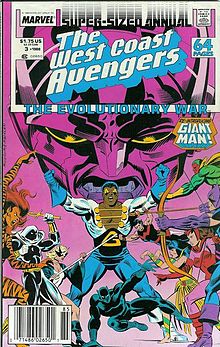 Dr. Foster later joins the staff of Project Pegasus, the U.S. government's semi-secret energy research facility, as a biochemical researcher. While there he reveals his identity of Black Goliath to the Thing, who at the time is working in security for Project: Pegasus. In the process of answering an emergency alarm, Foster decides to change his name to Giant-Man at Ben Grimm's (the afformentioned Thing) suggestion. Alongside the Thing, Quasar, and the Aquarian, Giant-Man defends Project: Pegasus against Nuklo, the Grapplers, Klaw, Solarr, and the Nth Man. After working at Project: Pegasus for a short time Foster reveals that he is dying from radiation poisoning he contracted in his earlier fight with Atom-Smasher.[9]

He is next seen during the events known as the Evolutionary War. Foster is a scientist working for the High Evolutionary at his base in the Savage Land.[13] After discovering the High Evolutionary's plans for a genetic bomb, Foster sends a distress message to the West Coast Avengers. Mockingbird, Tigra, and Moon Knight are the only Avengers to answer his summons and join him in destroying the base. Foster reveals that he had been suffering from cancer since his last appearance. He retakes an improved growth serum, which adds clean (cancer-free) mass to his body, so he remains at giant-size until he can receive further treatment.[13] This was the last mention of Foster's cancer. Giant-Man later defeats Ant-Man's old foe Doctor Nemesis and Goliath in their scheme.[14]

Foster soon gives up the Giant-Man identity and Hank Pym subsequently takes it back for himself.[15] Not too long after that, Goliath's ionic powers are disrupted in a battle against the West Coast Avengers.[16] This causes an energy disruption which allows a race of extra-dimensional creatures, the Kosmosians, to attack Earth. Although the creatures are ultimately repelled, the energy disruption and effects on the Pym Particles affect all that have ever been exposed to them, except Pym himself, causing them to lose control of their growth and/or shrinking powers. During this storyline it was shown how Foster and Pym were trying to use Pym Particles to end world hunger.[17]

After losing his powers, Dr. Foster joins the staff of the Centers for Disease Control. In this capacity he helps the Avengers deal with a bio-weapon released near Mount Rushmore.[18]

Foster as Black Goliath appears very briefly as part of an ad-hoc team of "urban" superheroes (Luke Cage/Power Man, Iron Fist, Brother Voodoo and The Falcon),[19] although there is no explanation of how he has regained his powers.

Foster dons the identity of Goliath again (along with a new costume and without the modifying "Black") to first help the Thing deal with a supervillain (along with hitting him up for a research grant), then help Spider-Man track down the Hulk in order for Bruce Banner to possibly deal with Spider-Man's cellular degeneration. 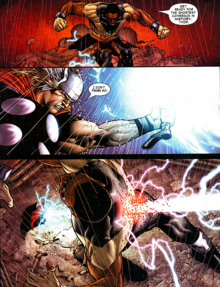 Goliath is killed by a clone of Thor in Civil War #4. Art by Steve McNiven.

When the Civil War breaks out, Goliath is seen as a member of Captain America's anti-registration Secret Avengers, adopting the alias of Rockwell Dodsworth. He subsequently appears briefly amongst the cavalcade of other super-heroes attending the wedding of the Black Panther and Storm.[20]

Foster is killed by a clone of Thor during a battle between the Secret Avengers and Iron Man's pro-registration forces.[21] His death was predicted by Deadpool[22] in a Cable & Deadpool side-series (Vols. 1-3) who, described Goliath as "deserving of death and worse," during a skirmish before the big fight.[23] Goliath's last words are "Get ready for the shortest comeback in history, Thor!" before the Thor clone blows a hole through his chest with lightning.[24]

"Having died at giant size, and with the biological changes that go on in a human body after life has left, such as rigor mortis and the like, Goliath's body could not have been returned to its normal size by Pym Particle exposure again without destroying it-- it would have torn itself apart under the strain. They could perhaps have done so later on, but by that point it would have begun to smell" (quote from Tom Brevoort, editor of Marvel's Civil War),[citation needed] so Foster is buried as a giant, with Tony Stark (Iron Man) paying for the thirty-eight burial plots required to accommodate him. His death affected the balance of forces in the war, leading several previously pro-Registration figures to go to Cap's side, most notably the Invisible Woman, the Human Torch, and Spider-Man, along with the Black Panther and Storm who were neutral before Foster's death; his death also led some formerly anti-Registration heroes to join Iron Man's side.[volume & issue needed]

Bill's nephew Tom Foster, a student at M.I.T. informs the Black Panther that he intends to follow in his uncle's footsteps by cracking the Pym Particle formula and becoming a hero. The Panther promises to help him achieve his goal.[25] When the Hulk returns to earth to take revenge on the heroes who sent him into space, Tom Foster can be seen watching the fight between Iron Man and the Hulk.[26] Later, he publicly denounced Reed Richards and Tony Stark for their hand in his uncle's death.[27] Afterwards, Tom Foster recreates and drinks the formula originally created by his uncle, and becomes the new Goliath, and a member of Damage Control.[28]

It is shown in Mighty Avengers #24 that Norman Osborn dug up Foster's grave and removed his clavicle, hoping to use the Pym particle residue to track down Henry Pym's Mighty Avengers. It is later broken in half by Osborn in a fit of rage after hearing Hank Pym declare his team to be "the real Avengers" on national television.[29] When Hercules ventures into the underworld, Foster can be seen in Erebus: the place in between life and death where those who feel they still have business in the mortal world (ranging from Ancient One, Banshee, Baron Heinrich Zemo, Blink, Cobalt Man, Commander Kraken, Cypher, Darkstar, Elvis Presley, Hippolyta, Jackal, Jack of Hearts, Jack O'Lantern, Namorita, Orka, Puck, Scourge of the Underworld, U-Go Girl, Veranke, and Wasp) linger and gamble for their resurrection.[30]

Bill Foster's superhuman powers are a result of his ingestion of a biochemical formula containing Pym particles. He has the ability to increase his size and mass to a gigantic size by psionically drawing extra mass from an extra-dimensional source while gaining superhuman strength in proportion to his height. The extra mass returns to the extra-dimensional source as he decreases in size. The process of changing height is fatiguing, making Foster more vulnerable to harm, after successive changes.

Foster was able to routinely grow to 15 feet (4.6 m) in height, and could lift approximately ten tons at that height. After regaining his powers during the "Evolutionary War", his level of power increased, and although precise quantification was not provided, he has demonstrated the ability to grow to 25 feet (7.6 m) in height.

Bill Foster has a Ph. D. in biochemistry, and is a brilliant biochemist with a gifted intellect.

A zombified Black Goliath attacks the fortress of Doctor Doom known as "Doomshadt" in Marvel Zombies vs. The Army of Darkness #4. He is repelled by Doom's forces as he is impaled by several large missiles and killed when they explode while still within him.[31] A different zombified Black Goliath shows up in Marvel Zombies Return. He had been decapitated and his still 'living' zombie head is used as part of a makeshift computer to allow the zombified Hank Pym to create dimensional travel. This Goliath is destroyed in an attack by human-friendly forces.[32]

In the pages of A-Next, Bill Foster is seen within the series as his son, John Foster, becomes the new Earth Sentry.[33]

Goliath was one of the "Giant-Men" created by SHIELD as part of the Ultimate Reserves. He was a former Green Beret and had a tattoo of "Goliath" on his arm. He was killed during the Liberators attack on New York City.[34]