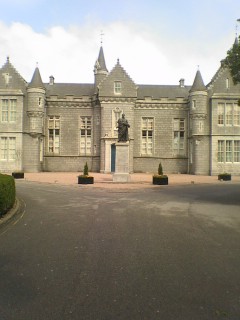 Aberdeen Grammar School, known to students as The Grammar or AGS, is a state in the City of . It is one of twelve secondary schools run by the educational department. [cite web
url=http://www.aberdeencity.gov.uk/acci/web/site/xcc_CommunityDetail.asp?id=132&ind=1&ind2=349
title=Aberdeen Grammar School
publisher=www.aberdeencity.gov.uk
accessdate=2008-03-24
last=
first=] It is the oldest in the city and one of the oldest s in the , with a history spanning 750 years.

Founded around 1257, the year used in official school records, it began operating as a school only for boys. Located on Skene Street, near the centre of the city, it was originally situated on Schoolhill, close to the current site of . It moved to its current site in 1863, and became in 1973. From 1970&ndash;1977 it was known as Rubislaw Academy, after the nearby Rubislaw area of Aberdeen.

In an annual survey run by the British broadsheet newspaper "", Aberdeen Grammar was rated the 12th best Scottish state secondary school in 2007, and second in Aberdeen behind . [cite web| url=http://www.timesonline.co.uk/parentpower/league_tables.php?t=state_secondary_schools_in_scotland|title=The top 50 state secondary schools in Scotland| accessdate=2008-08-05| date=2007| language=English] There are three houses in the school&mdash;Byron, Melvin and Keith-Dunn&mdash;who compete frequently in different inter-house sporting events.

The most notable alumnus is , the famous poet and writer. A statue of him was erected in the front courtyard of the school. Other alumni include Scottish international footballer and mathematician .

The exact date of the school's founding is unknown, however research done to mark the school's 750th anniversary led to the belief it was formed in c. 1257, which is the date that is now used for official school purposes. The earliest documented date of its existence is in the Records of 1418, when the and Council nominated John Homyll as "Master of the Schools", in place of Andrew of Chivas, who died.

From 1861&ndash;1863, the school moved to its current location on Skene Street. A large granite building in was constructed and officially opened on . This allowed expansion of the curriculum to include English, mathematics, modern languages, art and gymnastics. Other buildings and extensions have been added to the 1863 building since it was built. These include the Modern Language Block (originally a ) and the 1960s modern design: west-wing science block, theatre and the dining hall. Originally a fee-paying boys' school it became a council grammar school and then a comprehensive in 1970. It became co-educational after the summer of 1973 when girls were first admitted.

In 1986, the original building was devastated by a , destroying most of the rooms including the large library, a collection of Byron's notebooks, the trophy room and other classrooms, although the historic was mostly undamaged. [cite web|url=http://www.hmie.gov.uk/documents/inspection/aberdeen_grammar06.html|title=Aberdeen Grammar School Aberdeen - HMIE|accessdate=2007-12-06|date=2000|language=English] The school was rebuilt over many years, with modern facilities, while pupils studied in temporary classrooms in the playground. These s were used by the English and Art Departments.

The school and FPs club own the 18 acre at a site about a mile away from the main school building. Shared with the former pupils' club, the location has pitches with a stand, football pitches, grass hockey pitches and an hockey pitch built in 2005.

In recent years the school has been the site of a number of newsworthy events, including a protest against , the painting pink of an entire temporary classroom block and, most recently, a bomb threat. [cite web|url=http://news.scotsman.com/education.cfm?id=1129532002|title=Milk protest turns sour|accessdate=2007-01-30|date=2002|language=English] [cite web|url=http://news.bbc.co.uk/1/hi/scotland/north_east/7092189.stm|title=Charges over "threatening call"|accessdate = 2007-11-18|date= 2007|language = English]

The motto is "Bon Record". This is not to be confused with that of the City of Aberdeen&mdash;Bon Accord&mdash;which was first heard of in 1308, over 50 years after the school was founded.

Today the school is run by Aberdeen City Council in accordance with the Scottish Executive's educational guidelines for . In the 1998&ndash;99 , the education of each pupil at the Grammar School specifically cost £2,690. [cite web| url=http://www.scotland.gov.uk/library/documents-w5/ssc-06.htm| title=Scottish Schools: Costs for Scottish Schools 1996/97 to 1998/99| accessdate=2007-01-30| date=1999| language=English] This is however much less than today, when Aberdeen City Council spent an average of £5,834 per secondary school pupil as a whole in its authority during the 2005–2006 session.

The curriculum is much the same as used for the rest of the Scottish state secondary schools, and provides for a wide range of subjects. Pupils are presented for , and , Higher and examinations through the (SQA). An emphasis is on the more traditional subjects such as , English and . French and German are taught at the school, but Spanish was discontinued in 2006 due to shortage of staff. Also taught are subject areas such as , and , [cite web| url=http://www.take2theweb.com/pub/sso/aberdeengs/jl.html| title=Craft, Design and Technology (school website)| accessdate=2007-12-06| date=2006| language=English] and the social subjects – modern studies, and .

To conform to government health and fitness regimes, each year must spend two school periods (1 hour 45 minutes usually) per week at the Rubislaw Playing Fields with their year. This is not an optional area of the course, until the sixth and final year. However, in this year it can be selected as an additional subject which is not in any columns on the choice form. The sporting year is split into winter and summer games, with the outdoor sports concentrated on in summer and the indoor in winter. The range of sports covered in the course include rugby, football, hockey, softball, cricket, swimming and tennis.

In the session 2006&ndash;2007, 43% of fifth- and sixth-year pupils received a qualification equivalent of five Highers or more&mdash;a 3% increase on the previous year. It is now ranked 12th equal in Scotland for these qualifications. Furthermore, 64% of fourth-years gained a Standard Grade at Credit level&mdash;an increase of 4%. The school is currently ranked 10th in this field.In an annual survey run by the British broadsheet newspaper "The Times", Aberdeen Grammar was rated the 19th best Scottish state secondary school in 2005 based on exam results, rising to 16th in 2006 and, most recently, 12th in 2007.

About 1160 attend the school each year, between the ages of about 11 to 18. The school's catchment area centres around the west-end of the city, including Rosemount and Mannofield. There are five main primary schools that feed into the school, located throughout the centre and west-end of Aberdeen: , , , and (a ). Under the "Parent's Charter", children from other areas can attend the school after successful application by parents. However, places using this method are limited for each year.

When starting school pupils are allocated into one of the three houses in the school. These three houses are "Byron", "Keith-Dun" and "Melvin". The house system is limited to mostly sporting events, but the system was revised recently to bring the tradition of school houses back into the everyday running of the school. s take place between houses, particularly in sport, during the annual inter-house games afternoons. These take place during the month just before where houses compete in rugby, football and hockey. Recently, under the new rector, other activities have been included into house competitions. The system is also used to identify pupils' register classes.

The school has a strong sporting tradition, and has a particular emphasis on boys' rugby union and girls' hockey.

A yearly school musical is performed by the "Face the Music" society; recent performances include Grease, Annie Get Your Gun and – a locally written musical. A solely pupil-run theatre group performs each year as part of the "Pied Piper" society.

There are musical evenings twice a year that showcase the school's musical talent. There is a , , junior and senior s and a string orchestra. Lessons are available in brass, , strings, , and , and every pupil is educated in music as part of their curriculum. Also in the school is a successful club, open to all pupils. The club meets weekly in the school's lecture theatre, split into two different age categories&mdash;juniors and seniors&mdash;and argue over predefined motions to match the pupils interests. Participants in each category are given opportunities to represent the school, competing nationally in different tournaments.

The school has a large and active Former Pupils' Club, which has members all over the world and a clubhouse at Queens Road opposite the extensive Rubislaw Playing Fields. The club is home to the largest selection of sports clubs in Aberdeen.

There have been many s who have headed the school.

*James Legge, first of Chinese at .

*William Robinson Clark, Dean of and of and Professor of , mental and at , .

*Sir James Donaldson, former Principal of , Professor of Humanity at , Rector of both and .

*James Beattie, Professor of and at University of Aberdeen, .

* Craig Clunas, Professor of at , and Oxford University.