:"This article refers to the Khitan . For the Turkic state, see ." 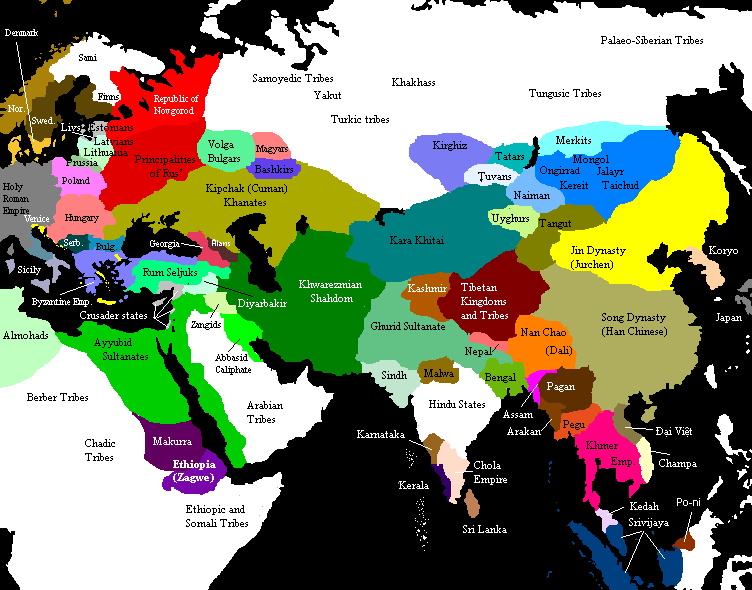 The Kara-Khitan Khanate, or Western Liao (Mongolian Хар Хятад; Kara Kitad; zh-tsp|t=西遼|s=西辽|p=Xī Liáo, [1124 is the year in which Yelü Dashi proclaimed himself king, while still in Mongolia] -) was a Khitan empire in . The dynasty was founded by , who led the remnants of the to Central Asia after fleeing from the conquest of their homeland in . The empire was usurped by the s under in 1211; traditional Chinese, Persian and Arab sources consider the usurption to be the end of the empire. ["The Empire of the Qara Khitai in Eurasian History: Between China and the Islamic World", pp. 2] The empire was destroyed by the in 1218.

The Khitans ruled from their capital at (in today's ). They directly controlled the central region of the empire. The rest of their empire consisted of highly-autonomous vassalized states, primarily , the , the Uyghurs, the and the Western, Eastern and Fergana Kara-Khanids. The late-arriving s also became vassals, before usurping the empire under .

The Khitans maintained their old customs, even in Central Asia. They remained nomads, adhered to their traditional dress and maintained the religious practices followed by the Liao Dynasty Khitans. The ruling elite tried to maintain the traditional marriages between the Yelü royal clan and the Xiao consort clan, and were highly reluctant to allow their princesses to marry outsiders. The Kara-Khitai Khitans followed a mix of and traditional Khitan religion, which included fire worship and tribal customs, such as the tradition of sacrificing a gray ox with a white horse. In an innovation unique to the Kara-Khitai, the Khitans paid their soldiers a salary.

The empire ruled over a diverse population that was quite different from its rulers. The majority of the population was sedentary, although the population suddenly became more nomadic during the end of the empire, due to the influx of Naimans. The majority of their subjects were Muslims, although a significant minority practiced Buddhism and . Although Chinese and Khitan were the primary languages of administration, the empire also administered in Persian and Uyghur. ["The Empire of the Qara Khitai in Eurasian History: Between China and the Islamic World", pp. 94]

The Kara-Khitai empire was established by , who led 100,000 Khitans into Central Asia from Manchuria by way of Mongolia. Yelü conquered Balasagun from the in 1134, which marks the start of the empire in Central Asia. The Khitan forces were soon joined by 10,000 Khitans, who had been subjects of the Kara-Khanid Khanate. The Khitans then conquered , , and . The Khitans defeated the Western Kara-Khanid Khanate at in 1137, eventually leading to their control over the . They won the against the Western Kara-Khanids in , , which allowed the Khitans to control and forced to become their vassals.

Yelü soon died in 1143, and was followed by his wife, , as regent for their son. Their son, , died in 1163 and was succeeded by his sister, . She sent her husband, Xiao Duolubu, on many military campaigns. She then fell in love with his younger brother, Xiao Fuguzhi. They were executed in 1177 by her father-in-law, Xiao Wolila, who then placed on the throne in 1178. The empire was weakened by rebellions and internal wars among its vassals, especially during the latter parts of its history. In 1208, the Naimans fled from their homeland and were welcomed into the empire of the Kara-Khitai. In 1211, the Naiman prince, Kuchlug, captured Yelü Zhilugu while the latter was hunting, ending Khitan rule in the Kara-Khitai empire. The Mongols captured and killed Kuchlug in 1218. The Mongols fully conquered the former territories of the Kara-Khitai in 1220.