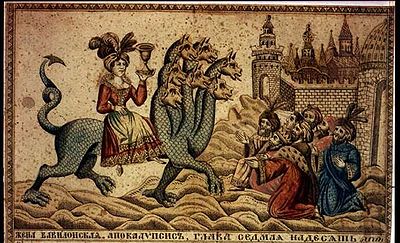 The Whore of Babylon or "Babylon the great" is a Christian allegorical figure of evil mentioned in the Book of Revelation in the Bible. Her full title is given as "Babylon the Great, the Mother of Prostitutes and Abominations of the Earth." (Greek: Βαβυλὼν ἡ μεγάλη, ἡ μήτηρ τῶν πορνῶν καὶ τῶν βδελυγμάτων τῆς γῆς; transliterated Babylōn ē Megalē, ē mētēr tōn pornōn kai tōn bdelygmatōn tēs Gēs).

The Whore is associated with the Antichrist and the Beast of Revelation by connection with an equally allegorical kingdom. (The word "Whore" can also be translated as "Idolatress").[1][2] The Whore's apocalyptic downfall is prophesied to take place in the hands of the beast with seven heads and ten horns. There is much speculation within Christian eschatology on what the Whore and Beast symbolize as well as the possible implications for contemporary interpretations.[3][4][5][6][7]

The “great whore”, of the biblical book of Revelation is featured in chapters 17 and 18. Many passages define symbolic meanings inherent in the text.

Rome and the Roman Empire

Many Biblical scholars[8][9] believe that "Babylon" is an allegory of Rome; perhaps specifically at the time to some aspect of Rome's rule (brutality, greed, paganism), or even a servant people that does the bidding of Rome[citation needed].

Because Spiritual Babylon would have worldwide influence, affecting "all nations", Ellen G. White was led to believe that Imperial Rome could not meet such a specification, as she said it only had influence in the Old World.[30]

Historicist interpreters commonly used the phrase "Whore of Babylon" to refer to the Roman Catholic Church. Reformation writers from Martin Luther (1483–1546) (who wrote On the Babylonian Captivity of the Church), John Calvin (1509–1564), and John Knox (1510–1572) (who wrote The First Blast of the Trumpet Against the Monstrous Regiment of Women) taught this association.[31][32] The Roman Catholic Church denies the claim that it is being referred to by the Book of Revelation as the Whore of Babylon.[33]

Most early Protestant Reformers believed, and the modern Seventh-day Adventist Church teaches, that in Bible prophecy a woman represents a church.[34][35] "I have likened the daughter of Zion To a lovely and delicate woman." (Jeremiah 6:2 NKJV) A harlot, it is argued, is representative of a church that has been unfaithful:

"Go, take yourself a wife of harlotry
And children of harlotry,
For the land has committed great harlotry
By departing from the LORD.” (Hosea 1:2 NKJV)[36]

They also believed that the primary location of this unfaithful church is stated in the same chapter.

"And the woman whom you saw is that great city which reigns over the kings of the earth." (Revelation 17:18)

The connection noted above on the seven hills of Rome is argued to locate the church.[37][38][39]

Jehovah's Witnesses believe that the Whore of Babylon represents "the world empire of false religion",[40] referring to all elements of worldly religions that do not adhere to biblical neutrality with respect to the world's political and commercial elements, including, but not limited to, Christendom, a term they use to refer to 'professed Christianity' as opposed to "true Christianity".[41][42]

They believe that the harlot—the empire of false religion and an enemy of God—has persecuted God's prophets and people, and that 'false religion' commits and has committed "fornication" with the world's political and commercial elements.[43]

Some traditionalist Catholics who hold the position of Sedevacantism, most notably the Most Holy Family Monastery, believe that a counterfeit bride – a Counter-Catholic Church – will arise in the end times in order to deceive faithful Catholics; they teach that this counterfeit Church is the Roman Catholic Church after the Second Vatican Council.[44] 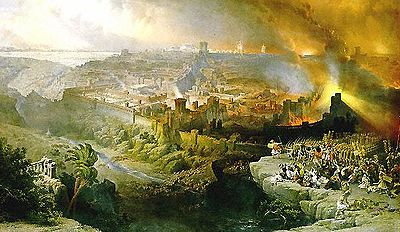 The Siege and Destruction of Jerusalem, by David Roberts (1850)

Many Biblical scholars[45] and theologians point out that although Rome was the prevailing pagan power in the 1st century when the Book of Revelation was written, the symbolism of the whore of Babylon refers not to an invading infidel of foreign power, but to an apostate false queen, a former "bride" who has been unfaithful and who, even though she has been divorced and cast out because of unfaithfulness, continues to falsely claim to be the "queen" of the spiritual realm.[46][47][48] This symbolism did not fit the case of Rome at the time. Proponents of this view suggest that the "seven mountains" in Rev 17:9 are the seven hills on which Jerusalem stands and the "fall of Babylon" in Rev 18 is the fall and destruction of Jerusalem in 70 CE[49]

Several Old Testament prophets referred to Jerusalem as being a spiritual harlot and a mother of such harlotry (Isaiah 1:21; Jeremiah 2:20; Jeremiah 3:1-11; Ezekiel 16:1-43; Ezekiel 23, Galatians 4:25). Some of the these Old Testament prophecies as well as the warnings in the New Testament concerning Jerusalem are in fact very close to the text concerning Babylon in Revelation, suggesting that John may well have actually been citing those prophecies in his description of Babylon.[50]

For example, in Matthew 23:34-37 and Luke 11:47-51, Jesus himself assigned all of the bloodguilt for the killing of the prophets and of the saints (of all time) to the Pharisees of Jerusalem, and, in Revelation 17:6 and 18:20,24, almost identical phrasing is used in charging that very same bloodguilt to Babylon. This is also bolstered by Jesus' statement that "it's not possible for a prophet to be killed outside of Jerusalem." (Luke 13:33).[51]