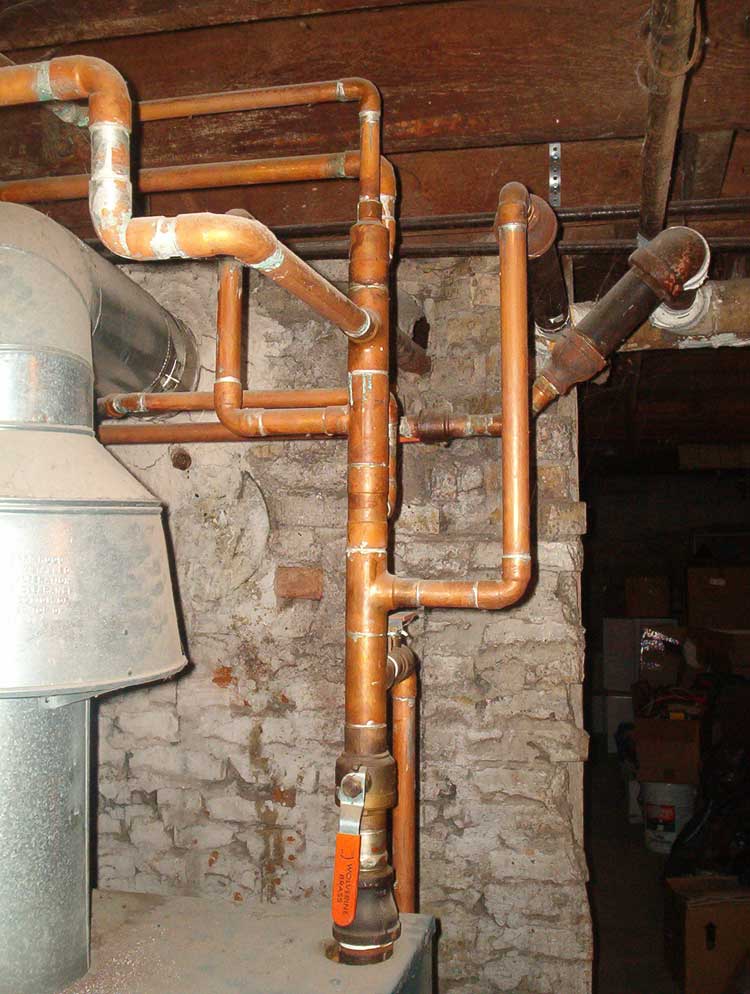 thumb|200px|A_system_of_ water tubes used in a heating system.] Water pipes are pipes or tubes, frequently made of (PVC/uPVC), , , or , that carry pressurized and treated to buildings (as part of a ), as well as inside the building.

For many centuries, was the favored material for water pipes, due to its malleability (this use was so common that the word "" derives from the word for lead). This was a source of lead-related health problems in the years before the health hazards of ingesting lead were fully understood; among these were s and high rates of . Lead water pipes were still in common use in the early 20th century and remain in many households. Lead-tin alloy was commonly used to join copper pipes, but modern practice uses tin-antimony alloy solder to join copper in order to eliminate lead hazards.

Wooden pipes were often used in Montreal and Boston in the 1800s. The pipes were hollowed-out logs, which were tapered at the end with a small hole in which the water would pass through. The multiple pipes were then sealed together with hot animal fat.
pipe was long a lower-cost alternative to copper, before the advent of durable plastic materials but special non-conductive fittings must be used where transitions are to be made to other metallic pipes, except for terminal fittings, in order to avoid corrosion owing to electrochemical reactions between dissimilar metals (see ).

fittings and short pipe segments are commonly used in combination with various materials.

The difference between pipe and tube is simply in the way it is sized. PVC pipe for plumbing applications and galvanized steel pipe for instance, are measured in IPS (iron pipe size). Copper tube, CPVC, PeX and other tubing is measured nominally, which is basically an average diameter. These sizing schemes allow for universal adaptation of transitional fittings. For instance, 1/2" PeX tubing is the same size as 1/2" copper tubing. 1/2" PVC on the other hand is not the same size as 1/2" tubing, and therefor requires either a threaded male or female adapter to connect them.

The thicknesses of the water pipe and tube walls can vary. Pipe wall thickness is denoted by various schedules. Pipe wall thickness increases with schedule, and is available in schedules 20, 40, 80 and higher in special cases. The schedule is largely determined by the operating pressure of the system with higher pressures commanding greater thickness. Copper tubing is available in four wall thicknesses. Type DWV (thinnest wall; only allowed as drain pipe per UPC), Type 'M' (thin; typically only allowed as drain pipe by IPC code), Type 'L' (thicker, standard duty for water lines and water service), and Type 'K' (thickest, typically used underground between the main and the meter). Because piping and tubing are commodities, having a greater wall thickness implies higher initial cost. Thicker walled pipe generally implies greater durability and higher pressure tolerances.

Wall thickness does not affect pipe or tubing size. 1/2" L copper has the same outer diameter as 1/2" K or M copper. The same applies to pipe schedules. As a result, a slight increase in pressure losses is realized due to a decrease in flowpath as wall thickness is increased. In other words, 1 foot of 1/2" L copper has slightly less volume than 1 foot of 1/2 M copper.

Demand for copper products have fallen due to the dramatic increase in the price of copper, resulting in increased demand for alternative products including PEX and stainless steel, however numerous PEX failures have been reported and rumored across the US, leading to many to question the quality of this type of alternative system.Fact|date=June 2008